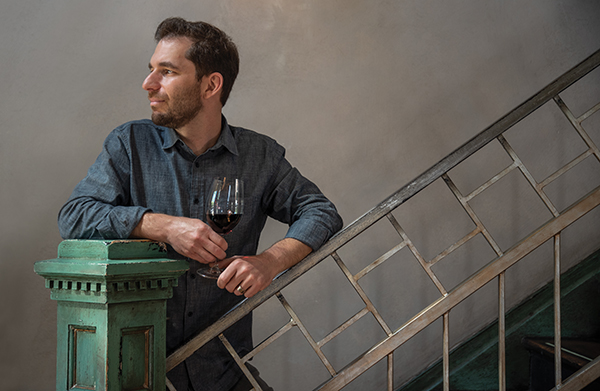 The man behind two of Little Rock’s most beloved restaurants is here to stay.

“Failure wasn’t an option. I wanted to keep every single customer that came through that door, forever.”

So says Tomas Bohm, owner of The Pantry and sister restaurant, The Pantry Crest. Dining at either restaurant means you have probably spoken with Bohm, as his signature move of visiting with each table is something most folks in Little Rock have come to expect. Bohm is a nice guy, like genuinely nice, and his friendly demeanor and European accent only add to the overall experience.

Bohm is from a small spa town named Marianske Lazne in the Czech Republic, where he was raised by parents in the service industry. 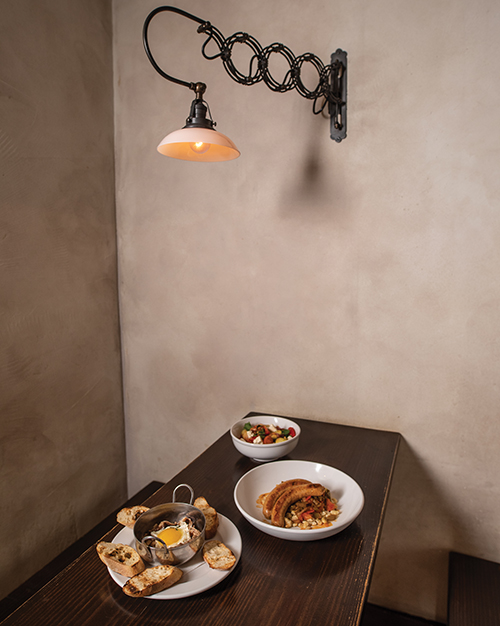 “My dad was a hotelier, and my mom was a server at one time,” Bohm says. “I grew up in Hotel Bohemia, where my dad was the general manager, just always running around.”

With the service industry coursing through his veins, a young Bohm embarked on a hospitality and culinary school path throughout his teenage years, later studying at the university level in Vienna, Austria. Following that, he hooked up with an Austria-based company for an externship that took Bohm to Asia. He was hit by the travel bug.

“That was amazing,” he says. “I traveled all over that part of Asia with the little money that I saved, places like Hong Kong, Malaysia, Singapore and parts of China. I traveled for four months. Asia changed my life.”

But after a year and a half, most of which was spent in Thailand, Bohm returned home to the Czech Republic. At the time, his grandmother spoke of distant relatives who moved to New York City many years prior, who, like Bohm, had sought out a career in hospitality. In the mid-1970s, these folks made the trek from New York City to a small town they had heard about, affectionately referred to as Little Switzerland — Eureka Springs, Arkansas. They fell in love with it and later built The Bavarian Inn. A young Bohm wanted in, both from the perspective of traveling to a new, exotic place like Arkansas, but also because he desired to further his career of working in restaurants. 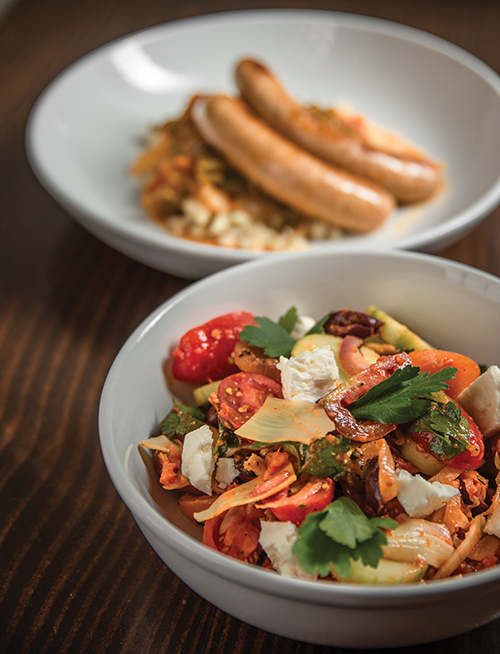 He says, “Even when I was a little kid, I always gravitated towards the restaurant in the hotel. I loved to hang out down there, just watching all the cooks work.”

Unfortunately, there was only one problem: The visa that would allow him to travel to the States required continuous employment. His distant cousins’ work visas for The Bavarian Inn were all being used at the time. Fortunately, a friend in Russellville had room to work at his restaurant for the first year of Bohm’s year-and-a-half-long visa. The last six months could be spent in Eureka Springs at The Bavarian Inn.

“I didn’t care. I just wanted to come there, work, travel and go back home,” Bohm says. And eventually, he did — but not without his fair share of bumps along the way, as might be expected for a wet-behind-the-ears, Czech-born 22-year-old coming to live in the states for the first time. “I was really culture-shocked.”

For the next year, he worked in a nondescript restaurant just a stone’s throw from Interstate 40, all while living in a nearby motel, bouncing from back and forth between the two places with occasional Sunday visits to Little Rock. 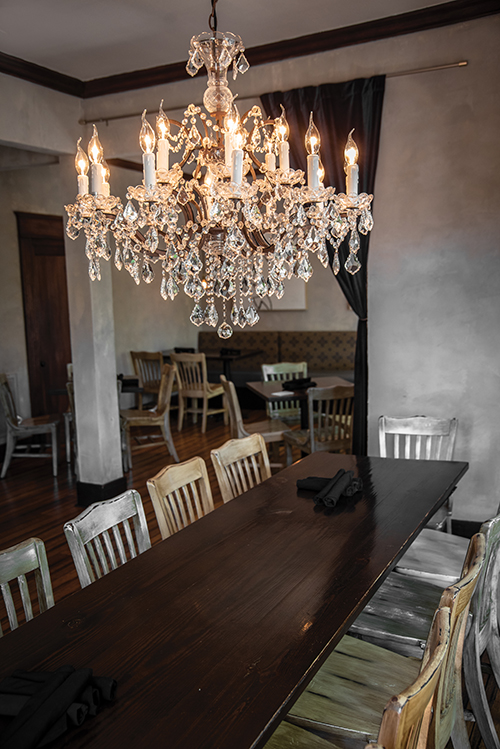 Cozy elegance is the vogue at both locations.

“I had such a good time on my Little Rock visits. The town really spoke to me, even from the beginning,” Bohm says.

And although his time spent in Russellville was filled with grueling hours, Bohm enjoyed that period of his life before finishing out his visa in Eureka Springs. There, he worked for three months, all the while gearing up for his next adventure with his remaining days in the United States.

Bohm says, “I wanted to save a little money, rent a car and travel. I flew my baby brother, Daniel, to Little Rock, and we rented a little three-door hatchback. As long as it had unlimited mileage, that’s all we cared about. We ended up traveling everywhere, over 16,000 miles in three months. It was an incredible time experiencing the states.”

But, alas, after this latest journey, Bohm found himself back home in the Czech Republic. Yet, he longed to return to Arkansas, with his sights set on Little Rock.

“When we went on those Sunday trips to Little Rock, I never forgot the good times we had,” he reminisces. “When we pulled up to Hillcrest, it had a little bit of a European feel to it. This is where I wanted to stay.”

On Jan. 4, 1996, Bohm arrived back in Little Rock, this time thanks to a student visa from the University of Arkansas at Little Rock. Over the next several years, he got his green card and sharpened his restaurateur skills with stops at Izzy’s, 1620 and SO. In his free time, Bohm enjoyed hanging out at Sufficient Grounds Café in Hillcrest, a spot where he met his wife, Megan, and that would eventually become the home of his second restaurant, The Pantry Crest.

But before The Pantry Crest, there was The Pantry, which is now in its 13th year of business. And while it is never smooth sailing in the restaurant industry, the start for Bohm as a business owner was a particularly rough haul. Determination and a relentless drive not to fail proved to be the keys to success.

“I wanted to open my own place, but I had no money,” he says. “Well, I had some money, but not much. I was looking for an existing place I could take over.”

Fortunately for Bohm, famed restaurateur Denis Seyer was looking to make a change at Gypsy’s Grill & Bar. Bohm caught wind of this, requested a sit-down, and proceeded to tell Seyer of his plan for a restaurant specializing in homemade, Central European cuisine. The two worked out a deal for Bohm to take over the space.

“He was super generous,” Bohm says of Seyer.

Bohm’s next move was to secure a kitchen lead, and he set his sights on Titus Holley, someone he had previously worked with from his time at SO. But first, Bohm had to sell Holley on his concept and vision. 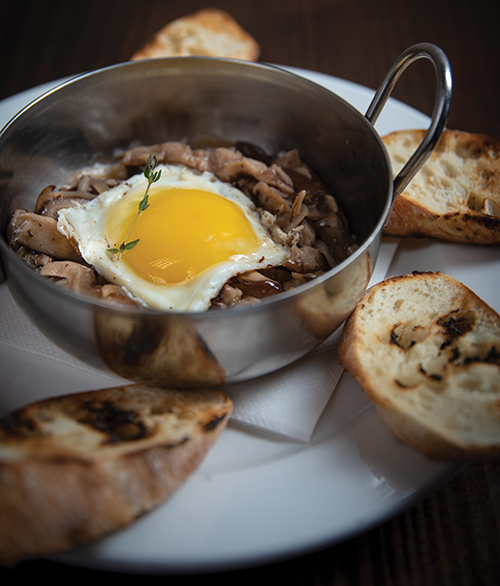 “I told him, ‘This might be new to you, and you might not know what you are doing right now, but I’ll teach you. I want you on my team. I want you running this kitchen. There might be some growing pains, but you have what it takes to make it work,’” Bohm recalls. He continues, “To this day, Titus is one of the hardest working guys I have ever met.”

From the beginning, it took a tremendous amount of grit and determination from Bohm, Holley, and others to get The Pantry on folks’ radars. Much of the menu was literally and figuratively foreign to many folks. Change takes time, and time costs money, something that Bohm didn’t have much of. Things were touch-and-go, to say the least, but six months into the venture, a highlight article from a major publication proved instrumental in catapulting the restaurant into popularity.

“When that came out, it changed my life,” Bohm says.

The restaurant never looked back, establishing itself as a hallmark for consistently delicious food and stellar service in Little Rock, thanks in large part to a dedicated staff and a menu featuring favorites like lasagna, bacon-wrapped dates, truffled deviled eggs and The Pantry Board, the signature charcuterie board with various house-cured meats, cheese, bread, pickles and jams.

As for Bohm, he’s now Little Rock through and through, having established himself and his restaurants as part of the fabric of our local dining scene.

“I love it here so much,” he says. “I just wish to leave a small drop in the bucket of this town after I’m gone. The community has been so amazing.”

I’d say the feeling is mutual.

2. You love to bike around town. How often are you able to get out each week?  I try my best to bike four days a week.

3. What is your favorite non-outdoor hobby? I love to drink wine.

4. With that said, what is a good bottle of wine to purchase for under $20? Tough question. I am going to say Joseph Phelps Vineyards.

5. How many cups of coffee do you drink each day? Four.

6.What is your most embarrassing moment at The Pantry?  Oh man, this was at the beginning. I was carrying a tray of bottled beers and glasses. I turned around,  and one of the beer bottles flipped on the tray and spilled on this little girl. The parents were so mad. I must have spilled a good 8 ounces of beer on this girl’s head, and she was like 10 years old.