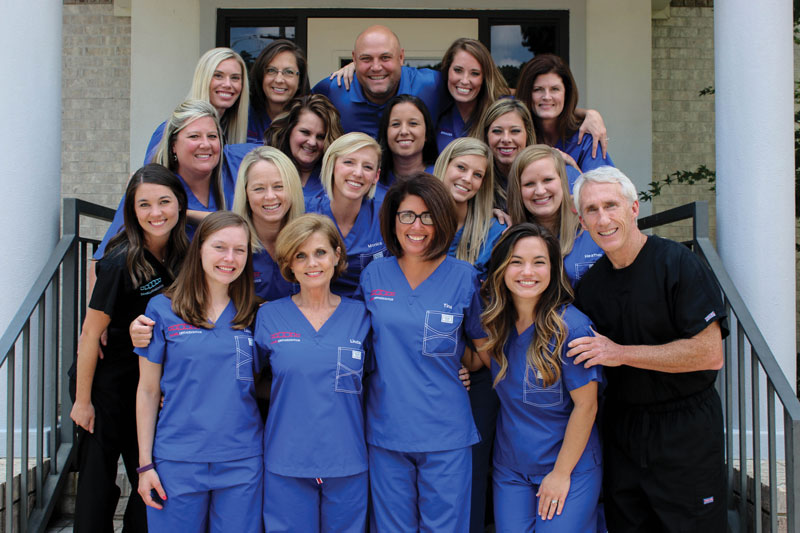 [dropcap]D[/dropcap]r. John Daniel, an Arkansas native, started Daniel Orthodontics in August of 1990. Dr. Daniel got started in his line of work because of his dad, who was also an orthodontist.

“He continued the tradition from there,” Josh Seaman says.

Seaman is the director of operations for the Daniel and Hopkins teams, and he believes their practice sees much of their success because of where Dr. Daniel’s priorities lie.

“It’s really about his patients and his team. He’s a humble man and he never wants credit… He’s been right here in the same community for 27 years,” Seaman says.

Seaman says Dr. Daniel leads from the heart, which brought him to expand his office so that patients would have a greater variety of services, appointment options, and locations from which to choose.

“He wanted to serve surrounding communities a couple of days a week, as well,” Seaman says.

He says Dr. Daniel’s business has developed by branching out more to serve in other communities, but the core of why he does what he does is still there.

“A lot of it has stayed the same… He has several staff members who have been with him for over 22 years,” he says. “When people join him and his practice they get to see the difference they are making and they get to see how he handles himself and puts Christ first in all that he does.”

Seaman says Dr. Daniel believes in a faith-based practice, and wants everyone who steps foot into the office to feel comfortable and appreciated.

“For him, it is truly about the patients and the kids that come in and see him, along with making the family comfortable,” he says.

“It’s also about his team. I think the fact that he has had [his business] for so long shows that it’s more successful today than it has been. It’s all about others, not himself.”

Dr. Daniel opened his office with the intentions of helping others, and ended up playing a role in the development of another family-owned orthodontic practice.

“When Dr. Hopkins finished his orthodontic residency, he trained alongside Dr. Daniel, and Dr. Daniel was kind of a mentor to him,” Seaman says. “Dr. Daniel and Dr. Hopkins are both great men who follow God and follow their heart and who have done wonderful things.”