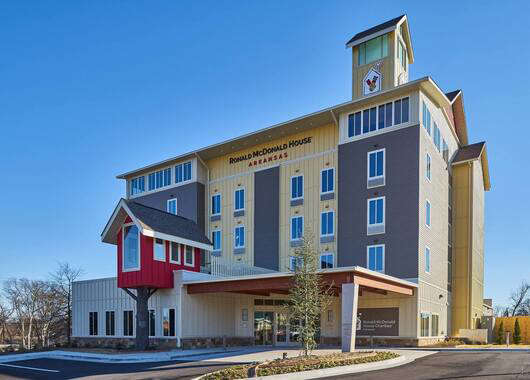 The house stands sentinel over Arkansas Children’s Hospital right across the street and the University of Arkansas for Medical Sciences (UAMS) a couple of miles up the road, offering solace and shelter to parents of sick children. Meals and lodging are offered free or at a pittance; the love is always on the house.

“This is a special place, unlike any other place,” says Shelbie Hart, who’s been here a total of 63 days with her husband, Spencer, as their 7-month-old daughter, Reese, receives treatment across the street.

There’s a playfulness at Ronald McDonald House, given the underlying focus is children. Primary colors, squeaky-clean rooms and sparkling windows are everywhere you look, anchored by those things that make a home — a large fireplace, a warm dining room. There’s even a family dog, Mac the Doodle, officially on payroll as Director of Smiles. 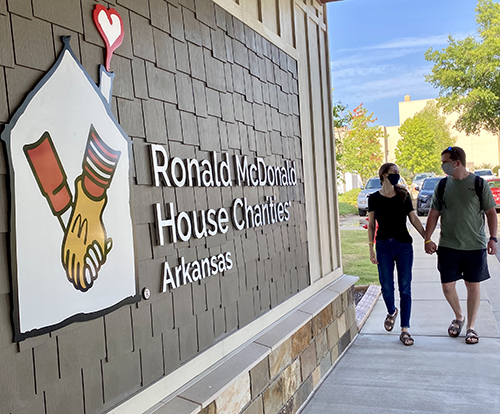 “[The staff have] come to feel like family to us, because we haven’t had our family here,” Hart says. “We’ll stand down in the lobby and talk with them every morning. That’s been nice. They check in on us; they ask how Reese is doing.”

But there’s something else here these days, a yawning emptiness that’s foreign to this happy place. Normally buzzing with activity and people, the house is eerily quiet. Here and there, a parent makes his or her way to the coffee machine, and you can hear the liquid hit the cup from across the dining room.

Hart talks softly, but her voice is amplified in the near-empty common area. 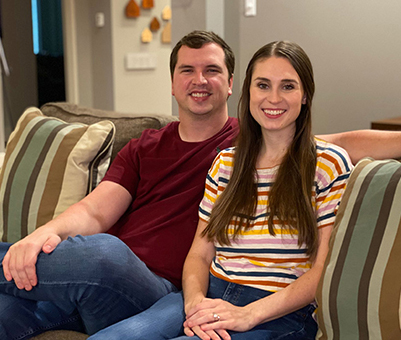 “Pre-COVID, in February and March, this place was full of people, full of life,” she says, looking around. “There were [volunteers] coming in, cooking meals, just making you feel like you were at home. And now, because of COVID, they can’t do that.”

Janell Mason, executive director of Ronald McDonald House Charities (RMHC) of Arkansas, describes herself as the staff’s “cheerleader,” but she’s not fooling anybody. Even with a mask on, the empty-nest syndrome brought on by operating the home in the era of COVID-19 is spelled out in her eyes.

“March 11, the whole staff and I were at an awards banquet, laughing and hugging each other,” she says. “Then, literally, all the blocks tumbled the next day. And that Friday, we closed our house to volunteers. The next week, we received guidelines from RMHC Global that asked every house to pause admitting new families. At that point, we were full with 32 families here. So as those families checked out, our numbers dwindled. 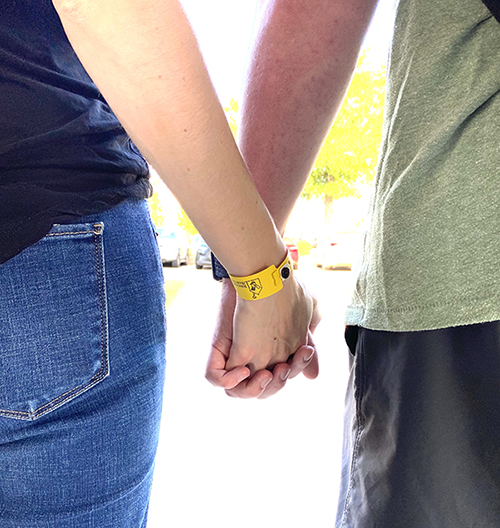 “On March 21, we were told to temporarily suspend our Ronald McDonald Care Mobile, which is our free mobile dental program. Our Ronald McDonald Family Room, that we had just opened six weeks prior at UAMS in the NICU [neonatal intensive care unit], was paused. We had to close it; we didn’t get to let people cycle out because UAMS had gone into serious lockdown.”

Mason’s tenure dates back to before the five-story, 32,000-square-foot home opened four years ago. Moving here was cause for celebration, but even on day one, the house never felt as big and empty as today.

“We ended up without families here for two weeks. Completely empty at the end of May,” she says. “It was so sad for our staff; we never envisioned this house empty. It was difficult.” 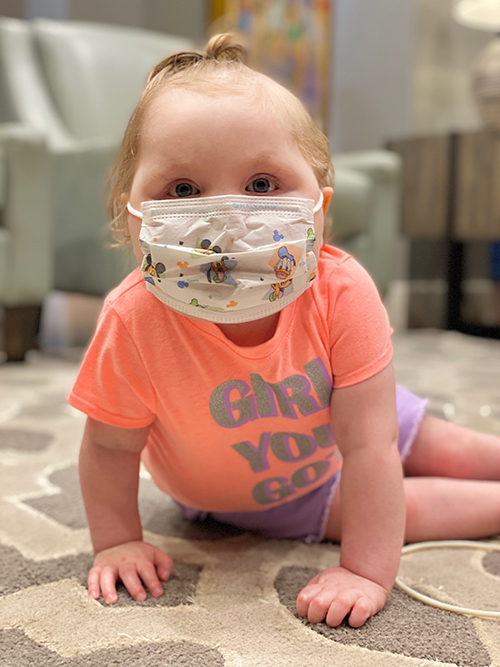 Of course, childhood illness hasn’t taken a breather for the coronavirus. As the place reopened on a limited basis, getting into Ronald McDonald House was still a godsend for parents, albeit fewer of them. Currently just five of the house’s 32 suites are occupied, one by Marissa Perryman and her daughters, Kami, 4, and Ella, 3.

Ella is a living teddy bear, all round cheeks, sparkling eyes and giggles. She was born with half a heart, so much of her life has been spent in doctor’s offices and hospitals, undergoing two heart surgeries in the first two weeks of life and another at about six months. When those failed, her doctors in Oklahoma City started calling for help, with only Arkansas Children’s Hospital saying, “Bring her in.” On April 1, she got a new heart, after 201 days on the transplant waiting list.

“September 5 was a year that we were here,” Perryman says as the girls play in a nearby toy room. “So, almost 13 months being in Little Rock and about 14 months total being in the hospital and away from home. I’m hoping we don’t have to do this anymore.”

When Perryman arrived in town, conditions were such that parents weren’t allowed to leave the hospital — for fear of what they might bring back with them — so she literally lived in the ward for two months before being allowed to move into Ronald McDonald House. Siblings are currently not allowed, but the staff gained her a waiver letting Kami to join her mother after months of living with her grandparents in Oklahoma. The sisters’ happy voices echo as their mother tries to put the house into words. 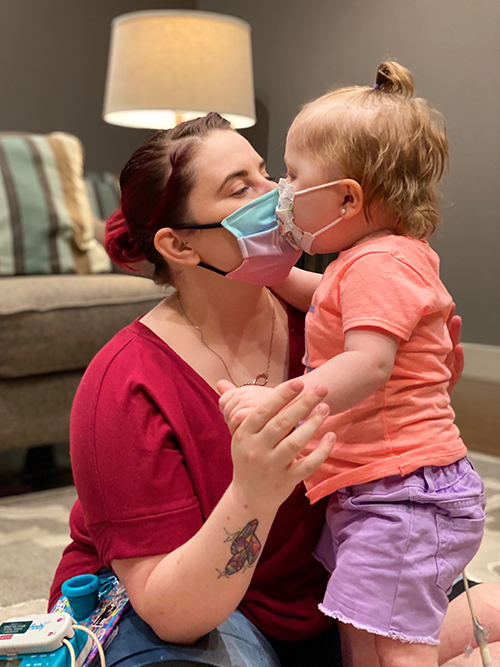 “Over here, they have extremely comfortable beds and a bath so you can relax,” she says. “If I got overwhelmed at the hospital, this was somewhere I could come and kind of revamp and take some time for myself and just breathe. Away from alarms going off and pumps beeping and all those nurses running in and out of the room constantly and medical stuff 24/7. This was the only place I had to take a break, so it was very nice to have.”

Talking about the organization and the medical ordeal, which was finally to end in September when they could go home, Marissa folds and unfolds her hands such that the muscles of her forearm make a black-and-gray anatomical heart tattoo appear to pump. Just like Ella’s.

“Families in situations like mine …” she says, looking off through the bright windows. “I’m a single mom. Their dad isn’t around for anything. I wasn’t working. I was staying in the hospital five hours away from home. I had no support system whatsoever. This house was my only place to take a break. To have food and beds and water and electricity. To have somewhere to go.” 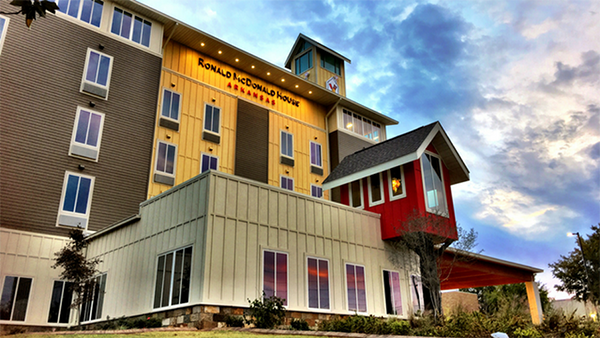 People mistakenly assume the name over the door of any Ronald McDonald House is also where it gets its funding. In fact, the vast majority of annual operating funds for each house is raised independently of corporate or franchisee contributions. Like most nonprofits, Ronald McDonald House was forced to cancel its fundraising events or convert them to a digital format. The notable exception was the group’s annual charity golf outing, which broke records for attendance, a reminder of how much the community values the organization.

Still, the matter of funding hangs thick and heavy in every planning session among Mason, her team and her board.

“Within two weeks, we had about $35,000 worth of events cancel,” Mason says. “That was a real eye-opener, and that was [in the] middle of April. We really didn’t grasp what that was going to look like moving forward. Right away, we saw donations drop off. Everybody’s scrambling and focusing on their own families and their companies and their livelihoods.”

The group got busy rethinking their approach to fundraising, in a way that showed empathy to what many donor families were going through in the pandemic.

By such dribs and drabs, the funding situation began to levelize, but it’s hardly righted itself or begun to move forward. Yet the need persists, and so the team forges ahead, serving people like the Harts of Fort Smith.

“It’s extremely overwhelming. No parent wants to see their child hooked up to 20 different machines making sure they stay alive. The emotions are high,” Spencer Hart says. “The thing that’s been the greatest blessing of Ronald McDonald House is it’s taken away everything else that would have been a worry or a fear.

The Harts hope to be back home by Halloween, home to loved ones, some of whom have never seen Reese in person. But there’s no guarantee that will happen. In the meantime, Ronald McDonald House allows the young family to focus on what matters most, including the lighter moments where the walls fall away, the medical instruments hush and they are like any other couple, marveling at their first child.

“We miss our family. We miss our friends. Our hearts ache,” Shelbie says. “This go around, we were not able to hold her for many, many weeks because she was intubated. Not hearing her cry or any typical baby things was really, really hard. You’re just sitting there looking at her.

“Then yesterday was the first day she’s laughed and smiled in 42 days. It was amazing! You forget what it’s like because she’s been trapped in a little bed for so long, just medicated. I have it on video, and we sent a mass text to everyone. It was the best thing ever. We all needed that.”