Put down the electronic devices …

Arkansas is known for its many things to do, and when it comes to family fun, The Natural State is no different. From exploring living history at the Clinton Presidential Center and aboard the U.S.S. Razorback to discovering the outdoor wonders of the Buffalo River or finding a diamond at Crater of Diamonds State Park, Arkansas has many fun and affordable opportunities, including world-class museums, nature centers and theme parks. While kids do enjoy trampoline centers and splash parks, AY is focusing on the unique attractions and experiences that make Arkansas a one-of-a-kind family vacation destination. So put down the electronic devices and get on the road to see all Arkansas has to offer.

As the seat of government, Little Rock has much to offer those interested in Arkansas and American history. From the State Capitol to the Old State House Museum, to the Clinton Presidential Center, Arkansans, young and old, can get a better understanding of our state’s political mechanizations and learn about how one of our own rose to the pinnacle of our nation’s political power. Take advantage of the photo op in the replica Oval Office to capture a lasting memory with a picture seated at the president’s desk.

For those interested in military history, the MacArthur Museum of Arkansas Military History – the birthplace of five-star General Douglas MacArthur – displays the state’s military heritage from its territorial period to the present. Just across the Arkansas River from downtown, the U.S.S. Razorback is docked in North Little Rock. The 311-foot submarine was present in Tokyo Bay at the ceremonial signing of the peace treaty ending World War II, which was overseen by MacArthur.

A trip to the zoo is exciting for all ages, and the Little Rock Zoo is worth the trip from any corner of the state. More than 750 mammals, birds, reptiles amphibians are on display, including lions, tigers, cheetahs, tropical birds, bears and penguins. A petting zoo and miniature train allow a hands-on experience for adults to the littlest of tykes. 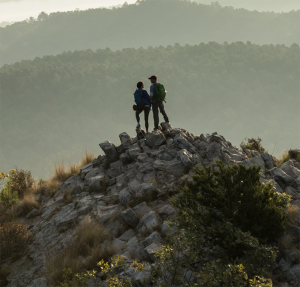 PINNACLE MOUNTAIN
Hike to the top at this day-use park offering a variety of outdoor adventures.

The Museum of Discovery in the River Market area is a can’t miss attraction. Learn about how the body and the physical world work around us and enjoy Arkansas-centric features on the state’s geology and experience what it’s like to live through a tornado in Tornado Alley Theater that comes alive with the rumble and roar of the unpredictable, fast-moving storms.

Just outside of Little Rock, a day of outdoor family fun can be had on Highway 300 going toward Roland. Start with a hike up Pinnacle Mountain, then check out BoBrook Farms, a 235-acre working farm, where you can pick your own blueberries and blackberries in May and June and pumpkin, winter squash and gourds in October. Wye Mountain also features opportunities for wildflower and berry picking during the spring and summer months.

For those interested in Native American history, the Toltec Mounds ceremonial grounds near Scott is a National Historic Landmark featuring the largest and most complex Native American mound site in the state.

If it’s the first weekend in May, hop on over to Conway for the annual Toad Suck Daze where more than 100,000 people gather for musical entertainment, vendors and arts and crafts, carnival rides, children’s activities, and of course, the World Championship Toad Races.

The experience of rooting on the Razorbacks is a state tradition, and there is no greater thrill than seeing the Hogs play in Fayetteville. Children relish the fun and excitement of making memories at home games at the University of Arkansas in Fayetteville. Of course, getting there is half of the fun. If it’s not out of the way, drive the Pig Trail Scenic Byway, through the Boston and Ozark Mountains, especially during fall, for an automotive adventure through one of the most beautiful and memorable areas of our state.

With the Buffalo National, Kings, Spring, and White rivers, there are ample options for floating, canoeing, kayaking, fishing, hiking and camping in the great outdoors. 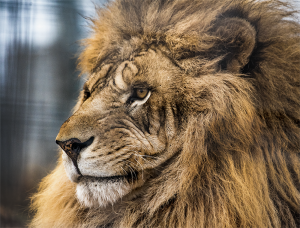 TURPENTINE CREEK
Visit a variety of exotic and native animals.

Not too far away in Eureka Springs is the Turpentine Creek Wildlife Refuge, the 459-acre home to a variety of exotic and native animals which is one of the nation’s most respected and unique big cat sanctuaries. The town also features the Eureka Springs & North Arkansas Railway. With a train museum, hourly rides on a vintage steam train, and dining cars available for lunch and dinner, a trip to the historic ES&NA Depot is a sure way to make all in your party feel like a kid again.

Every holiday season, A Christmas Story makes us feel nostalgic for our youth. In the film, young Ralphie wants nothing more than a Red Ryder BB Gun. In Rogers, visitors to the Daisy Airgun Museum can learn about the Daisy Manufacturing Company, Inc., the world’s oldest and largest manufacturer of airguns, ammunition and accessories and their museum, which showcases Daisy’s history with 150 antique airguns dating to the 1600s.

For those looking to beat the heat, splish-splash at the Rogers Aquatics Center and the Siloam Springs Family Aquatic Park, each offers fun with pools and water slides.

Most people forget that Arkansas was once a province of Spain, but the Old Spanish Treasure Cave keeps that part of the state’s history alive. First discovered by Conquistadors, the cave formation near Sulphur Springs is purported to hold buried treasure, which is believed to be hidden there today.

For those interested in hopping over into Missouri, Branson offers a number of exciting, family-friendly opportunities. Visitors can’t go wrong with the Titanic Museum, Silver Dollar City and Dolly Parton’s Stampede. A little farther north, Springfield’s Wonders of Life is always a hit. 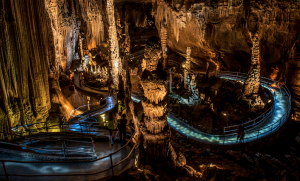 In addition to the fun provided by Arkansas State University athletics and events, Jonesboro has several things to do. The Bill and Alice Nix Petting Zoo, operated on campus by the ASU College of Agriculture, allows youngsters to visit several animals and also offers hayrides through the farm area and horseback riding in the farm pastures. It’s worth the trip, but only open three days in spring and three days in fall. With indoor and outdoor exhibits, films and nature trails, the Forrest L. Wood Crowley’s Ridge Nature Center explores the unique natural history and wildlife of a natural ridge formed smack-dab in the middle of the Delta.

The Blanchard Springs Caverns, near Mountain View, is a three-level cave system, two of which are open for guided tours by the U.S. Forest Service. Visitors can use the lighted, paved trails to see stalactites, stalagmites, columns and crystalline mineral formations developed by dripping water.

In late July, head out to the annual Cave City Watermelon Festival, which has celebrated “the world’s sweetest watermelons” since 1980.

Stuttgart is renown as the “Duck Hunting Capital of the World,” so it should come as no surprise that waterfowl are a central element of a family tradition spanning generations in southeast Arkansas. In the duck blind, fathers bond with their children and dispense a special kind of wisdom that isn’t handed down often. To celebrate all the duck means to the region, the city holds the Wings over the Prairie Festival, featuring the World Duck Calling Championship, every Thanksgiving week. 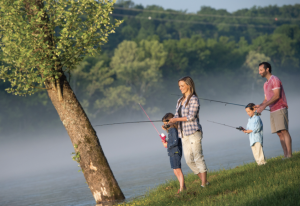 LAKE CHICOT
Fish on one of many southeast Arkansas’ lakes.

A fun day can be had in Pine Bluff with a visit to the Arkansas Railroad Museum, which features memorabilia from various Arkansas railroads, including equipment, old railcars, and a restored steam locomotive that was built in Pine Bluff in 1942, followed by an afternoon of kayaking down Bayou Bartholomew, the world’s longest bayou.

Blues music is alive throughout the Delta, and there’s no better celebration of the iconic Southern style than the King Biscuit Blues Festival, held every October in Helena-West Helena.

Much like a trip to a ballgame or a duck blind, parents and children fishing together are the stuff memories are made of. There are plenty of good oxbow lakes in southeastern Arkansas, but the fish always seem to bite on Lake Chicot at Lake Village.

CATHERINE’S LANDING
Glamp in a resort cottage at Catherine’s Landing.

With a colorful past and world-class horse racing, Hot Springs has many family-centered activities to enjoy. Whether you want to do some primitive camping or, “glamping,” in a resort cottage, a getaway to Catherine’s Landing’s 400 acres and a mile of water frontage on gorgeous Lake Catherine will strengthen family ties. While there, check out Adventureworks Outdoor Adventure Park’s 10 ziplines that cover over a mile of flying fun. Magic Springs Theme and Water Park is open weekends from April through October and daily late May through mid-August. Enjoy the thrill the rides and attractions of both parks, including the classic wooden roller coaster the Arkansas Twister and its famous 92-foot drop with a single price admission. The Mid-America Science Museum, Gangster Museum of America, as well as, the city’s numerous thermal hot spring waters, also add to the Spa City’s family offerings.

Not too far from Hot Springs, the Zip Lines at Ouachita Bend in Malvern provides hiking and flying fun on seven zip lines and hiking trails through the Ouachita Mountains along the Ouachita River.

Arguably the most unique of Arkansas attractions is the Crater of Diamonds State Park, near Murfreesboro, which features a 37.5-acre plowed field where visitors can hunt for diamonds and other semi-precious stones. On average, two diamonds are found per day at the world’s only diamond-bearing site open to the public. The Ka-Do-Ha Indian Village is also nearby. The ancient archeological site features the only open Indian mounds in the country. Visitors are allowed to search for arrowheads and crystals and can keep what they find.

Known as the “Quartz Crystal Capital of the World,” Mount Ida is home to numerous rock shops that allow visitors to mine their own crystals and bring them home as souvenirs.

When the temperatures rise, the Arkadelphia Aquatic Park helps families cool down, and the  Hope Watermelon Festival in Hope, held every August, features a 5K race, dog show and “Watermelon Idol” talent contest.