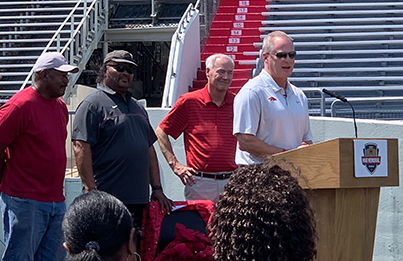 A couple of hundred hearty Razorback fans braved the mid-day heat to gather on the turf at War Memorial Stadium in Little Rock Friday and call the Hogs. Part of the second-annual #ONEHogCall event encouraging Hog fans around the state, country and even the globe to engage in a coordinated Hog call at 1 p.m. Arkansas time on the Friday before the season opener, the Little Rock event was one of three scheduled gatherings. Two more scheduled “hog calls” were planned for Fayetteville and many more expected to erupt organically across the state and beyond.

The Hogs open the 2019 season Saturday afternoon in Fayetteville against Portland State, but will finish the regular season at War Memorial on Nov. 29 against Missouri. Arkansas Athletic Director Hunter Yurachek told AY he introduced the promotion to help spur excitement for the first game and reinforce the Razorback brand, further distinguish the Razorback as unique among college mascots and celebrate the unifying impact Razorback athletics have on the state.

“There likely will be hundreds of non-staged Hog calls,” he said. “It’s awesome. The passion Razorback fans have for the Hogs is special. And this is one of many examples.”

As the Hogs were called inside the stadium, tailgaters from Benton and Bryant already were set up in the stadium’s east parking lot in anticipation of Friday’s Salt Bowl, expected to draw close to 40,000 fans.