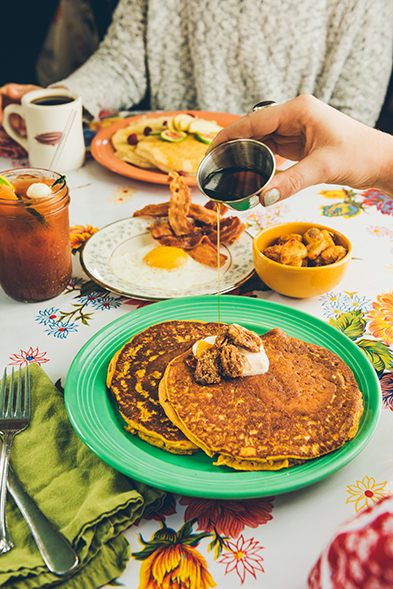 Since opening its doors in May, 2014, the Farmer’s Table Café in Fayetteville has invested more than  $900,000 in Arkansas farms- most of those local operations.
When Rob and Adrienne Shaunfield started the farm to table restaurant, their goal was to support the local food movement, serve healthy fare at affordable prices, and be environmentally responsible.
The business was an almost instant success.
A few weeks after they opened, musician and fashion designer Pharrell Williams just happened to be in town and popped in to eat. He posted an Instagram message recommending the breakfast sandwich. That post garnered nearly 100,000 likes and caught the attention of many hungry college students who’ve been coming back ever since.
The attention kept coming and awards and honors followed. The restaurant has received accolades from the  Food Network, USA Today,  Arkansas Times, and more. It has been voted Best Breakfast, Best Vegetarian/Vegan, Top Brunch Destination, Best Farm to Table, to name a few. 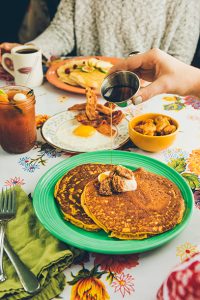 There is often a line for a table. To give you some idea of its popularity, each year they cook an average of 140,400 free range eggs.
The establishment is known for its sweet potato pancakes, breakfast tacos, eggs benedict and biscuits.
It has been a blessing, but it hasn’t been easy, says Adrienne.
“It’s fun, exciting, exhausting. The way we do things is the hardest way possible. I still have to go get a lot of our food. I don’t have a truck deliver it. I go to farmers’ market two to three times a week still. We are zero waste, so we carry our plate scrapings to farms for pigs and animals to eat. I feel like I am constantly hauling food places,” Adrienne says.
They follow the Food Waste Hierarchy- donating edible leftovers to hunger relief, then sending inedible scraps to feed animals, and finally composting the rest. All their meat is pastured raised and pasture finished, Animal Welfare Certified, and fed non-GMO feed.
Their green footprint is obvious throughout the café from the cloth napkins on the tables to the recyclable take-out containers. 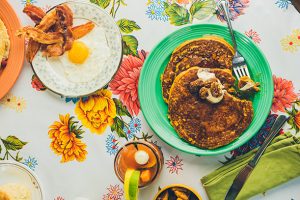 They have onsite organic gardens and use green cleaner in the restaurant, wherever possible.
RELATED: Building a Better Tomorrow One Home/Episode at a Time
Buying local is always the first choice, but when they can’t, they buy organic.
Roughly 90 percent of the food served is local with the exception of potatoes and onions because Adrienne can’t get the quantity she needs.
In the course of a year, she sources from roughly 100 farmers  and encourages other restaurants to buy local.
When they opened, they tried to price all entrees at $10 or less but that was not realistic and they’ve had to adjust prices- although the venue is known for its reasonable prices, especially for a farm to table establishment.
“We keep the margins slim. We try to be as accessible as possible. It’s more a mission of love,” the 37-year-old says.
Prior to opening the business, Adrienne was executive director of Feed Communities, a nonprofit that works with individuals, organizations, schools, businesses, government agencies and foundations to create sustainable partnerships to increase access to healthy produce in Northwest Arkansas communities.
Through her job she saw small farmers struggling, and that coupled with her passion for cooking, inspired the café. 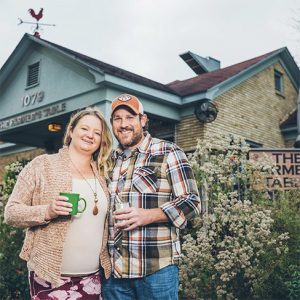 Her goal is to continue its success.
“Just to see it sustain itself. I am proud we have helped farmers quit some of their second jobs and make a living. We helped start a cooperative of meat and produce farmers. I wrote letters of support for grant funding and helped them connect with other restaurants,” she says.
Despite its popularity, Adrienne has no plans to expand.
“Small is beautiful,” Adrienne says. “Being authentic to what we do, we can’t get too big.”