Be Fast: Stroke Prevention and Care 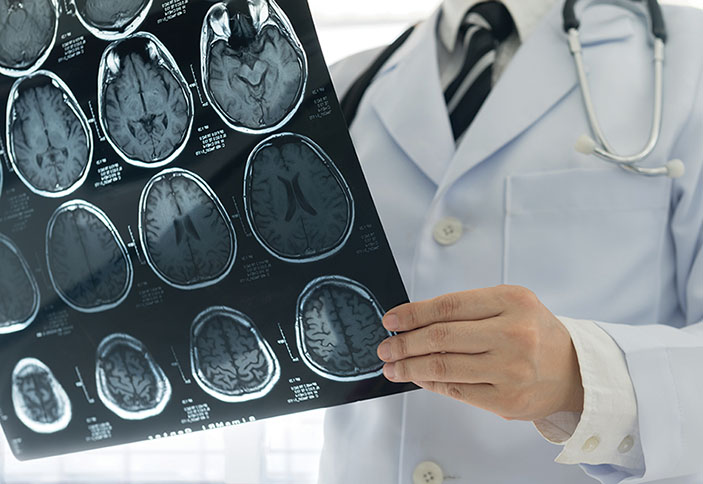 By Marla Cantrell
Every second counts. Step off a curb at the wrong time, and your world might end. Look down at your phone while driving, and you could cause a crash that could devastate your future.
Yes, every second counts, but none more than when you suspect you’re having a stroke.
In the nearly 40 seconds it took to write this, someone suffered a stroke. In another 40 seconds, it will happen again. That’s frightening, but, as with most things, the best way to beat fear is with knowledge.
First, let’s look at what a stroke is. Dr. Mohammad Owais, of Sparks Clinic Neuroscience Center in Fort Smith (which will become part of the Baptist Health system this month), described it this way: “A stroke occurs when the arteries to your brain are blocked, causing severely reduced blood flow.”
Eighty-seven percent of strokes are ischemic, as described above. A less common occurrence is the hemorrhagic stroke, which happens when an artery in the brain breaks open, and there are transient ischemic (TIA), often called mini or warning strokes, because they can be indicators of a more significant event in the future.
Most of us have seen someone in the aftermath of a stroke, perhaps with paralysis to one side of the body, speech problems and/or memory loss.
WHO’S AT RISK?
According to the American Heart Association, more women have strokes than men, and those strokes are more likely to be deadly. The risk for African-Americans is higher, as are those with a family member who’s had a stroke, particularly if it happened before they were 65. Add to the list anyone who’s suffered a heart attack or a TIA, which is a temporary blockage in the brain that may not leave lasting symptoms.
Even getting older is a factor. The likelihood of having a stroke increases with age, with the risk doubling every 10 years after the age of 55.
Now that we’ve determined the risks life throws at us, let’s talk about our individual health concerns. The leading causes of strokes are high blood pressure, high cholesterol, smoking, obesity and diabetes.
A host of heart issues, from carotid artery disease to atrial fibrillation, raises your risk, as does sickle cell disease. Even drinking alcohol at a rate of more than two drinks a day for a man and one a day for a woman, and not getting enough sleep, ups the chances for trouble down the road.
LOWER YOUR RISK
It’s time for some good news. Eighty percent of strokes are preventable with lifestyle changes and healthcare. Allison Capetillo, with the American Heart Association (AHA), Greater Houston, offered three ways to reduce your chances.
• Know your blood pressure and keep it under control. That means taking your prescribed medications as indicated, reducing salt intake and changing your lifestyle.
• Lose weight. Even small amounts of weight loss, five to ten percent, can make a world of difference. Weight loss also contributes to lower blood pressure.
• Stop smoking. Smoking causes damage to the blood vessels. This leads to hardening of the arteries, thickening of the blood and reduced oxygenation to the brain.
WHAT IF IT STILL HAPPENS?
Let’s say you do have a stroke. Be ready by memorizing the acronym FAST. It will help you remember what signs to recognize. F – Face Drooping. A – Arm Weakness. S – Speech Difficulty. T – Time to call 911.
Dr. Owais said while the FAST acronym is a great resource, there is another acronym you need to know. “In recent years, BE, for balance and eyes, has been added to the beginning because we’ve identified that there are acute ischemic stroke patients who suffer from loss of balance and vision problems before the onset of the FAST symptoms.”
A sudden severe headache with no cause can also be a sign you need to seek help.
After you’ve quickly assessed the situation, it’s imperative to call 911. Once emergency personnel reaches you, they can begin providing care and alert the hospital that you’re on your way. If for some reason you are the one who takes someone else to the emergency room, make sure you immediately announce what you’re dealing with. It’s as easy as saying the word “stroke” to emergency room personnel. Fast treatment is key.
Dr. John Menard, with the emergency department at Saline Health System in Central Arkansas, agrees. “People who recognize the signs and symptoms of stroke, and seek care, have better outcomes than those that delay getting treatment,” he said. “It is definitely possible to get back to where you were; however, time is a critical factor in that role.”
Since we’re discussing the importance of timely treatment, let’s look at what Capetillo had to say on the subject.
“Historically, we’ve always followed the rule of treating strokes no more than four and a half hours from the time the patient was last seen without symptoms. With some of the newer imaging technologies available to certain hospitals, we are now seeing strokes treated at 6, 12, 18 and even 24 hours past the last time without symptoms,” she said.
Beyond that, she said the AHA’s Get With The Guidelines® stroke program, which assists more than 2,000 hospitals to provide care, and the mainstream adoption of the mechanical thrombectomy procedure, which works for specific patients and allows a specially trained physician to remove the stroke-causing blood clot, are significant accomplishments.
The takeaway is that 80 percent of strokes are preventable. See your doctor regularly and take prescribed medications, lose weight if you need to and stop smoking. Also, exercise, eat well and rest. In short, take good care of yourself. And know that work is being done on your behalf, both by the AHA, and hospitals like Saline Health System and Sparks Regional Medical Center, both of which have credentials in stroke care.
If you do have symptoms in the future, remember to BE FAST.