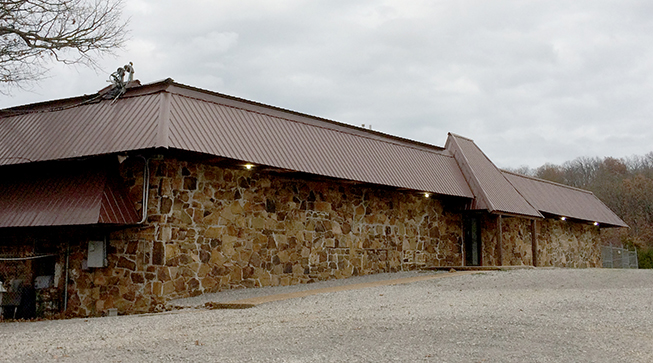 Mark Risk has purchased the native stone building in south Fayetteville that is best known for housing the Rockwood Club. The legendary venue is associated with the genesis of The Band, its one-time owner Ronnie Hawkins and the countless musical acts that performed there, including Jerry Lee Lewis, Wanda Jackson and Roy Orbison.
Located at 380 W. 24th St., the building had been inactive as a nightclub since the late 1970s. Fearing its demise, Risk bought the building as part of an organized effort to save and preserve the local landmark.
Originally known as the Rockwood Club, it was built in 1947 and was the first paid architectural project of Fay Jones, a celebrated architect from Arkansas who would, only a few years later, study with Frank Lloyd Wright. Jones served as a consultant, and this work is recorded with the University of Arkansas’ Special Collections library.
Risk is a longtime Fayetteville resident and real estate broker with a passion for live music and is working with people in the community to help determine its future. In this process, team members have discovered that there are very few photographs readily available of the club. Having this documentation is vital in this mission, which is why they are asking people to check their closets and attics for any photographs they may have of the building when it was an active club – especially from the late 1940s to mid-1960s. These could be of family members who attended the university during that time as well as longtime residents. Arrangements can be made to have high-quality scans of the images so that the photos can be retained by the owners.
For information about The Rockwood Club preservation project, please call Mark Risk at (479) 442-0762 or email [email protected].
READ MORE: Read AY‘s digital issue!