Feature: A Once in a Lifetime Find

The story of Esperanza is the stuff fairy tales are made of.

Photography by Cindy Momchilov and courtesy of Mike Botha

[dropcap]Brooke[/dropcap] Oskarson and boyfriend Travis Dillon visited a friend in Ratcliff, Ark., this past June, and while driving home to Colorado, the two decided to try their hands at one of their hobbies: prospecting. They’d heard of the Crater of Diamonds State Park in Murfreesboro. Oskarson said, “We talked about it and decided, ‘Let’s check it out.’ We didn’t know we could actually dig, but $8 to dig … that’s not much to spend to have a little fun.”

She picked a spot in the shade. They dug for a bit, then Dillon decided to rent a sifting tray. As he headed off, he told Oskarson to keep digging, if she wanted. “So I decided to dig. Three shovelfuls in, there it was. I thought, ‘Oh, something shiny.’ I thought it was probably a quartz or something.”

When Dillon returned and saw the stone, Oskarson said, his jaw dropped. “But I said, ‘Naw, there’s no way it’s anything.’”

So the two continued to dig for about an hour and a half before returning to the park’s Diamond Discovery Center. There, visitors, when entering the park, obtain information about Arkansas diamonds and can receive instructions for digging. If they’ve found something, park staff can assist them in identifying their finds.

Ellison said diamonds, jasper, agate, amethysts and quartz crystals are just a few of the more than 40 rocks and minerals often found at the Crater of Diamonds.

Oskarson and Dillon gave their finds to park staff. Oskarson said park officials identified and returned everything they’d turned in — “except my ‘shiny.’” They’d taken that item to be further assessed. “The park ranger kept coming out saying, ‘It’ll be just a few more minutes.’ Then they began to fill out the paperwork. I thought, “Oh my God! Holy cow! It’s a diamond?’ I thought it was a joke.” 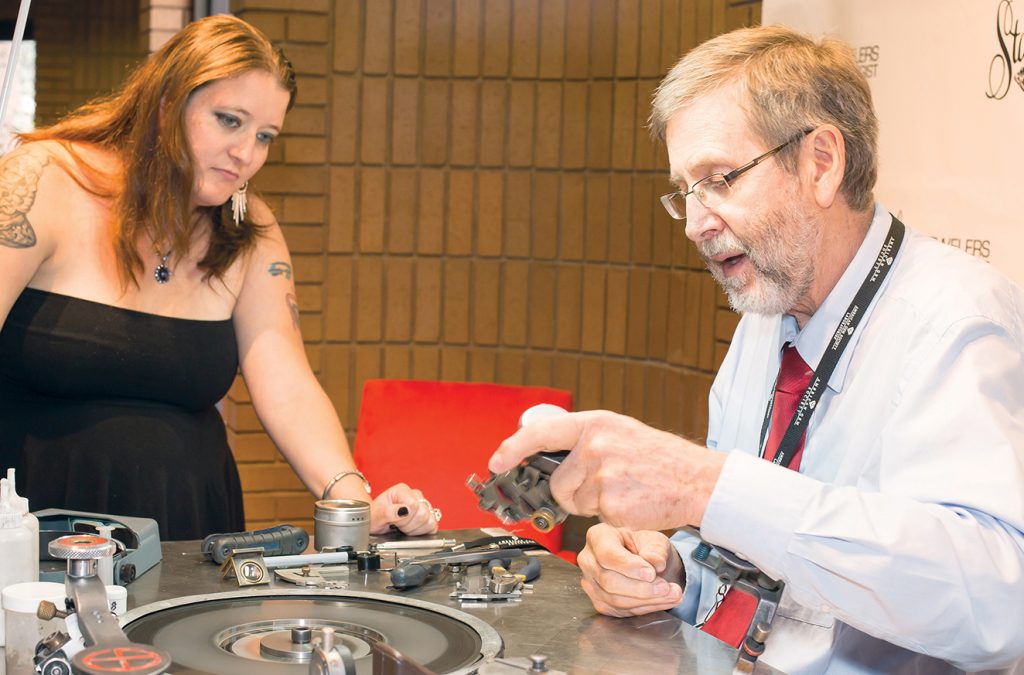 Oskarson and Botha during the cutting process at Stanley Jewelers

She named the diamond for her niece Esperanza.

The two returned to their Longmont, Colorado, home and Oskarson began looking for an appraiser. Thankfully, she said, she found Neil Beaty, an independent certified gemologist appraiser with the American Gem Registry.

“He said, ‘You’ve got two options: Go for the quick money and sell it, as is, now. Or hold out, go through a process and get more money in the long run.’”

What Oskarson did not know is that Esperanza is a rare diamond. It was an 8.52-carat, colorless diamond — it’s nitrogen-free, 100-percent crystalized carbon. According to Laura Stanley, a graduate gemologist and certified gemologist appraiser with the family-owned and -operated Stanley Jewelers, all diamonds are crystalized carbon, though, “Typically, diamonds have some impurities. They are often seen in color, like a faint yellow or brown. Esperanza has no impurities. It’s the whitest of the whites. And that’s extremely rare.”

A diamond so rare could not be trusted to just anyone. To create the perfect cut for Esperanza, they called upon the talents of Mike Botha, a master diamond cutter with Embee Diamonds. Botha has nearly five decades of experience. He’s cut more than 300 diamonds, including the Premier Rose Diamond.

(left) Esperanza in her raw form; (right) Esperanza as she is today, a flawless 147-facet white diamond.

“This is a very important diamond,” Botha said. “It’s the best diamond to come out of the Crater.”

Botha has enjoyed working with detailed, delicate and artsy things his entire life. As a child he loved to take watches apart and put them back together.

To cut Esperanza, he travelled from Prince Albert, Saskatchewan in Canada, bringing an 800-pound cutting table to Stanley Jewelers, to create what will forever be known as The Esperanza Cut.

“Esperanza’s building blocks are perfect. This diamond is perfect. It’s more than a perfectly shaped diamond — it’s an anomaly. My job is to take its shape and harness it,” Botha said.

His expertise and patience — it took eight days to cut and about 130 hours to polish — yielded The Esperanza Cut, a triolette — a word that didn’t exist until now — a teardrop-like cut he designed. As a result, Esperanza is now 4.62 carats and has 147 facets.

The diamond is scheduled to be auctioned off next April at the Heritage Auction House in Dallas. Her estimated value, according to Stanley, is $500,000.

Oskarson hoped to obtain six figures for the diamond. “No matter what, it will be a good return on the $8 we spent to get into the park,” she said.

Esperanza is on tour and will be displayed at Stanley Jewelers at 3422 John F. Kennedy Blvd., in North Little Rock, from Dec. 1 through Christmas. For specific hours, log on to stanleyjewelers.com. For more about Esperanza, log on to her Facebook page, facebook.com/theesperanza.