A call to serve others and a chance meeting … that’s how it all began.

Above photo by Niki Mangan

Melody Taylor (left) and Jennifer Mooney, along with some of the gently used merchandise at Shop My Closet. // photo by Janet Warlick

[dropcap]The[/dropcap] idea for Shop My Closet formed when Jennifer Mooney and Melody Taylor combined their two passions: shopping and benefiting others. The two met in the parking lot of Little Rock Christian Academy one afternoon in October 2012. Mooney, whose husband passed in 2010, shared her son Nate’s desire to go to Africa. Taylor told Mooney about Go Near Ministry, an organization she and husband Lewis funded in 2005. Go Near is  devoted to caring for widows, orphans and the poor of Kenya and Guatemala.

The Taylors have long felt a need to serve. The couple, along with their four children, including Anna, volunteered locally by serving Little Rock’s idle and disadvantaged youth. Then Anna, who was 14 at the time, asked to go overseas to serve. The family took a mission trip to Guatemala in 2004, where Taylor said they experienced a type of awakening.

“In Guatemala, we saw the true value of people. We worked with and served orphans, children who were trapped and abused. We saw the value of giving them our attention and love. We saw what a difference knowing someone cares can make. We made a decision to become more aggressive about ‘going near.’ It’s not about throwing money at a cause — which is good — but there’s real value in ‘going near,’ coming alongside someone and spending your valuable time and giving your attention.”

This is the ideal on which Go Near was founded; thus far, this 501(c)3 has helped 300 people serve orphans and widows in Kenya and orphans in Guatemala. The groups also minister to prisoners and partner with local ministries to “further the work of their ministries and encourage them in their faith.” 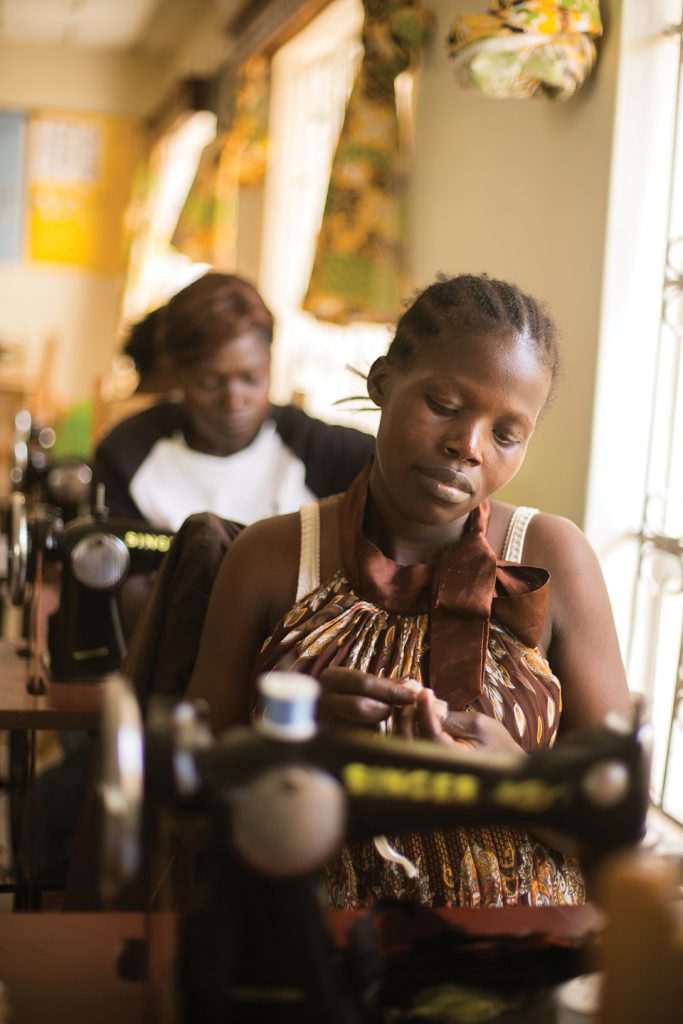 Feeling a need to “go near” more permanently, the Taylors moved to Kenya in 2007, when Anna was 16. While there Anna met Judith, a widow caring for eight children. Taylor said Kenyan widows are marginalized. “Their homes and possessions can be taken away without notice, leaving them homeless. Often other women see them as threats to their families, thus the women are isolated.”

Anna was struck by Judith’s spirit; though faced with unimaginable circumstances, she remained determined and hopeful, a hard worker with great leadership skills.

A bracelet from the Jimani Collection. // photo by Niki Mangan

The Taylors returned to Arkansas in 2008 due to political unrest; however, Judith and the plight of other women like her remained on Anna’s heart. That next year, Anna visited Rwanda, where she met girls who were her same age, 17, studying in first and second grade. She was, according to Taylor, beyond shocked. The experience moved her to action. Upon returning home, she made and sold crosses, earning $2,000 to help two of the girls continue their educations. Shortly afterward, inspired by the beauty of African fabrics, she had the idea to teach women to sew as a means to earn much-needed income by selling the clothing in the United States and abroad.

Anna, who’d planned to study art in college, changed her major to apparel studies and merchandising, and the ideas for the James127 Foundation and the clothing line Judith & James were born.

The foundation is named for the Bible verse James 1:27a: Religion that God our Father accepts as pure and faultless is this: to look after orphans and widows in their distress … . The clothing line is named for Judith and this verse, which encompasses the mission of the foundation and the fashion line.

While completing her studies, Anna visited and worked in Kenya during breaks and, in 2010, moved there to help oversee the school and missions work. In 2012, Judith & James hit the runway in Northwest Arkansas Fashion Week and was hugely successful. Just two years later, the line was featured during the 2014 spring/summer and fall/winter New York Fashion Weeks and in the international market at the Dubai Fashion Week. 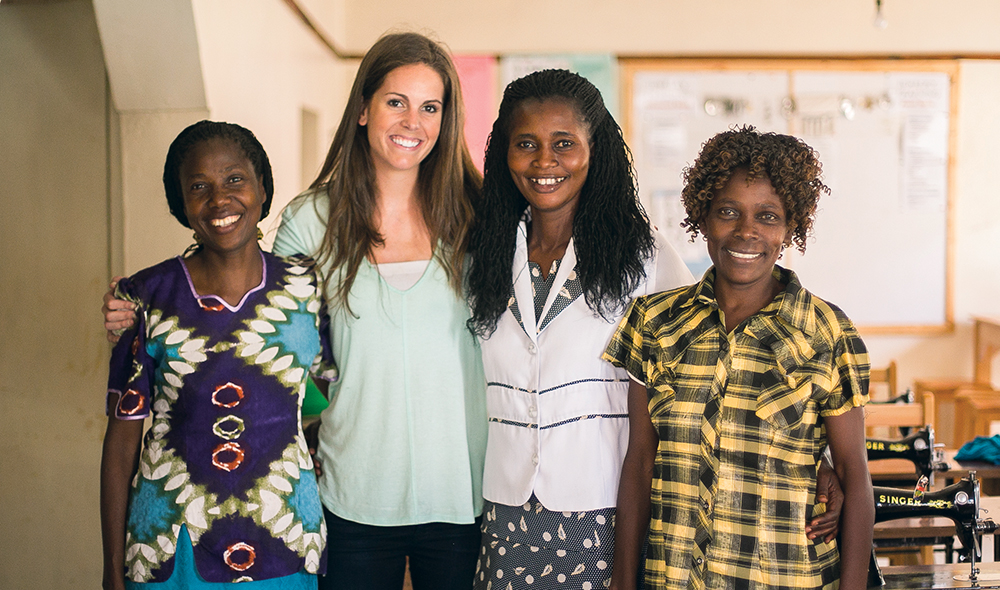 Anna (second from left) with Kassia, Judith, the namesake of Judith & James, and Damaris; these ladies are the three original seamstresses who create Judith & James pieces. // photo by Maura Dawn Photography

At press time, Anna was traveling in Nairobi, presenting Judith & James’ latest creations to tourists, visitors and officials visiting the various embassies and hosting private shows, gaining exposure that will, hopefully, prove invaluable to growing the brand, but, more importantly, help her organizations’ mission to “look after orphans and widows.”

Back to that fateful day in the parking lot of LRCA: Mooney had never considered global missions, however, the idea of working to benefit widows and orphans appealed to her. “Even here, in the United States, widows, especially young widows, are a forgotten group — even in churches. And in Kenya, there’s a stigma associated with being a widow. The women are typically uneducated, may be HIV-positive, and living in conditions that are so poor it’s beyond anything you can imagine,” Mooney said. “I felt we had to go. We had to help.”

The Mooneys visited Kenya with Go Near in the summer of 2014 and experienced firsthand the need for compassion and care that so moved the Taylors. Jennifer’s son Nate has returned to Kenya twice since then.

After her family’s return to Arkansas, Taylor continued to seek ways to further the work to which they’ve dedicated their lives. She visited New Heights Church in northwest Arkansas, where she met its pastor, Jim Hall. 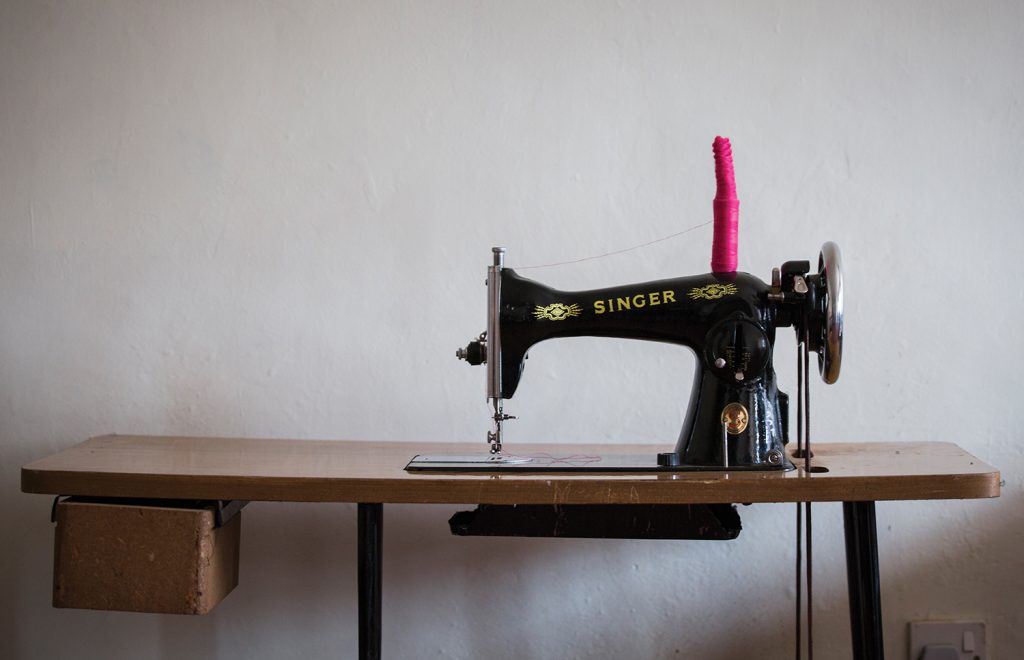 One of the sewing machines used at the James127 Foundation training center. // photo by Niki Mangan

“He said, ‘It’s difficult to raise money for ministry and especially so for international ministry; you should consider opening a thrift store,’” Taylor said. His suggestion was based on the success of his ministry’s nonprofit resale outlet, Potter’s House Thrift Store.

Shop My Closet, though now a brick-and-mortar business, began as a pop-up event. In fall 2013, Taylor’s friend Melanie Boutiette called friends, gathered their gently used clothes and set up a Shop My Closet sale. They raised $10,000. One year later, they held a second event and raised an additional $10,000. The funds were used to assist the mission work of Go Near; James127; and the women working as a part of Jimani Collections, a line of jewelry created by and benefiting women in Nairobi.

Encouraged by the successes and armed with a lot of leftover, but good inventory, the two friends sought out a temporary space, a prominent location to host another Shop My Closet event. They found the perfect space at 14810 Cantrell Road in Little Rock, Arkansas. The original plan was to be there for two weeks, but due to the incredible generosity of the shopping center’s owner, they’ve been there since March. 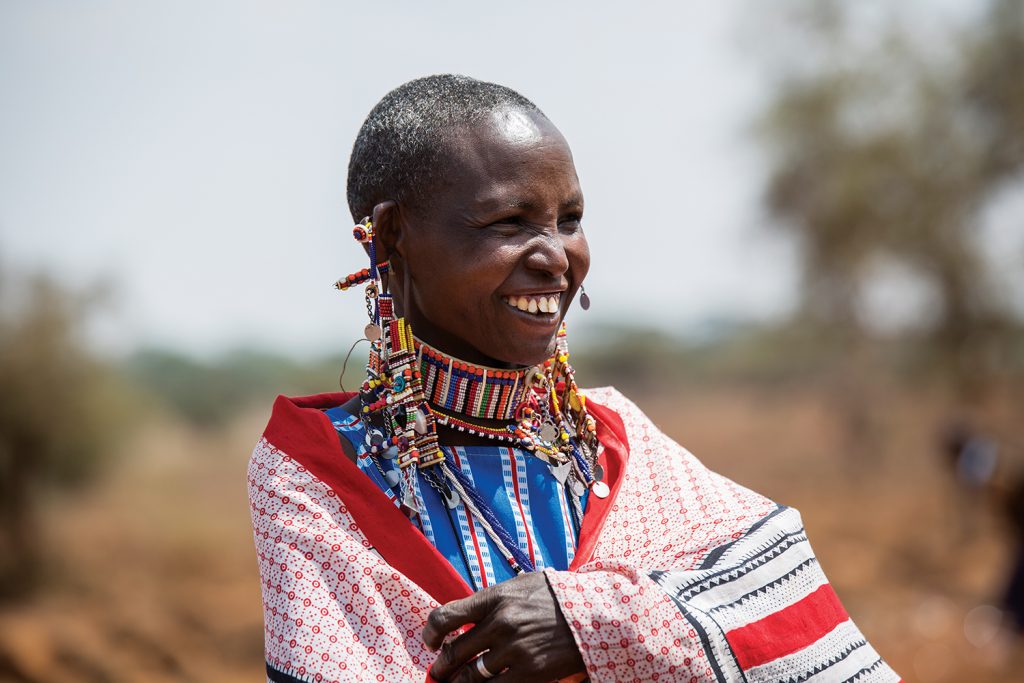 One of the many beautiful Maasai women Mooney met while in Kenya. // photo by Niki Mangan

“Every day something wonderful happens,” Mooney said. “We have the most generous donors — we wouldn’t survive without them — and conscientious shoppers. Sometimes, people say they’d rather see their money benefit others locally, and we understand that. But when you go to a third-world country and see the poverty and know there’s no welfare, no government assistance, you cannot help but want to help.”

Shop My Closet sells casual, workout, business and formal attire in sizes 0 to 28, including petite and maternity items, and shoes in a variety of sizes. Nothing in the store costs more than $50.

These two generous souls don’t keep excess items; each week, Shop My Closet donates 300 pounds of clothes to organizations like Big Brothers Big Sisters of Central Arkansas and the Dorcas House. Shop My Closet is open from 10 a.m. to 5 p.m., Wednesday though Friday and 10 a.m. to 4 p.m., Saturdays.