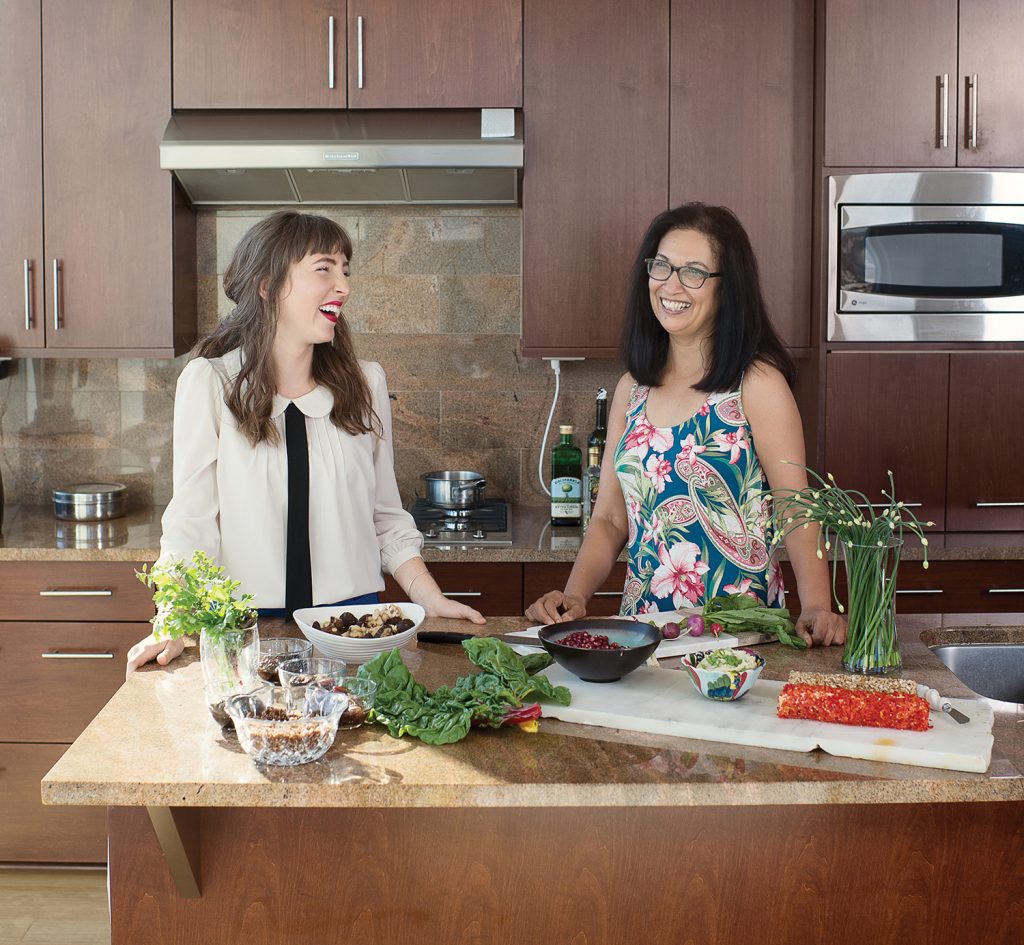 Dixon (left) and Budhraja surrounded by fresh, organic food — much of which was used to create the grain bowl pictured on the next page.

Put Thought Into What You Put Into Your Mouth

“It’s not about ‘healthy foods’; we need to know about nutrients. It’s not about counting calories; it’s about thinking holistically,” Dixon said. “We are all about looking at how foods complement each other. It’s actually a pretty simple way of looking at food. Most of us don’t look at food as fuel. Our goal is to lay out a foundation, to help people understand nutrition and the way our bodies metabolize foods.”

Dixon and Budhraja recently revamped the curriculum for a class they co-taught at Pulaski Technical College’s Culinary Arts and Hospitality Management Institute. The course, Healthy Foods and Nutrition, includes a look at “why we eat what we eat;” how to fool your taste buds; how the body processes foods; and it introduces students to unfamiliar foods, spices and gluten-free, vegetarian and alternative cooking and food-preparation methods.

“Much of what we eat is based on taste, aesthetics, our knowledge level and, particularly, tradition,” Budhraja said. “We most often eat based on cultural preferences, which is something that can be difficult to change.” Other things, such as availability and marketing, also factor into our food preferences and purchases. “We also look for guidance where it’s offered. For instance, if the [Department of Agriculture] says to eat three servings of dairy daily, that’s what we eat. So, it’s important to be cognizant of the messenger and the message.”

Budhraja also pointed out that it’s important to read labels — closely. For instance, a cereal may list a whole grain as its first ingredient — the first ingredient should be the main ingredient — however, if you look at the content of the additional ingredients, sugar is often the primary ingredient.

So, how can your “average Jane” turn over a new leaf — it is, after all, a new year and we’ve made our resolutions — and eat consciously without becoming an expert? Dixon’s suggestion: Eat mindfully.

She, for instance, eats a whole-food, plant-based diet. “Eat with an environmental mindset; recognize that everything is connected. Think sustainability,” she said.

Dixon’s decision to eat a plant-based diet was influenced by her desire to be healthy as well as supportive of the environment. She said you don’t have to become vegan or vegetarian, however, she suggests we all eat less meat and more plants. “Look at the resources needed to produce 1 pound of meat. It takes more water to raise 1 pound of meat than you use in one month of showering.”

According to the Alliance for Water Efficiency, the average American showers for 8.2 minutes, using 17.2 gallons of water; in 30 days, if you shower once per day, you’ll use 516 gallons of water. According to the U.S. Geological Survey, the water footprint required to produce a ¼-pound burger is 450 gallons and 1,800 gallons for a pound of hamburger. That figure includes water used to raise feed for the cow, in addition to the water the animal drinks.

So What Should I Eat?

“That said, if you’re going to eat meat, eat locally produced goods. Eat at restaurants that serve locally produced foods,” Dixon said. Consider becoming a locavore, one who exclusively eats locally grown, sustainable foods. She shops at one of Little Rock’s year-round farmers markets and eats foods that are in-season, which is also important.

According to the PBS-produced documentary “The Edible Backyard”: “The average distance that food travels to an American’s plate is 1,500 miles.” Further, according to sustainabletable.org, “40 percent of our fruit is produced overseas … and though broccoli is likely grown within 20 miles of the average American’s house, the broccoli we purchase at the grocery store travels an average of 1,800 miles to get there.”

Neither Budhraja nor Dixon believes in counting calories. The two say that being healthy and maintaining one’s weight can be done by exercising and eating whole foods prepared properly. Budhraja said, “Don’t count calories. Eat real food. Listen to your stomach. When you eat real foods, your stomach will tell you when you’re full. You cannot outrun [or out-exercise] a bad diet, because food goes through a cellular mechanism, meaning it’s broken down into its central components — including nutrients, fat and toxins — and crosses into your intestines, liver, brain, muscles, your entire body. …This is why it’s so important to eat whole foods.” Whole foods are foods eaten the way they are harvested, with little or no commercial processing. “Process the foods yourself, which simply means to cook them yourself.”

Eliminate soft drinks, diet soft drinks and juice, particularly. Soft drinks have as much as 12 teaspoons of sugar and other chemicals. Diet sodas contain sugar substitutes that are harmful to the body, and juices contain quite a bit of sugar as well. According to the doctor, they also often have unexpected ingredients. One brand in particular, she pointed out, has perfume. Budhraja recommends you either eat fruit or make your own juice. She said there’s no harm in having a teaspoon or two in your morning coffee — simply use moderation.

Eliminate processed snacks. “We really don’t need snacks. Three meals is all most of us require, unless you have a very active lifestyle,” Budhraja said. “Snacks, as well as appetizers and desserts, they’re all wants, ways to fill time and sell items when you’re in a restaurant. They’re all wants, but you don’t need them.”

Learn how to cook. “Unless you cook, you’re outsourcing your health. And food manufacturers, restaurants and the like, they are in the business of selling. Why would you outsource your health, the most important thing you have?” Budhraja said, in a matter-of-fact tone, “I have people tell me that they’d lay down their lives for their children; why won’t you cook for them? We are not helpless in this.”

She recommends batch cooking. “Most people have four burners, which means you can cook more than one meal at a time. It simply takes 2 or 3 hours of time. Make a trip to the farmers market or the grocery store to purchase everything. Don’t put it away — process it. Clean, cut, season and roast your vegetables in the oven. Choose two types of beans and two types of grains, and cook them on the stovetop. This usually takes 30 to 40 minutes. Cool everything; put it in containers; and stack them in the refrigerator. Batch-make a dressing and store it in a mason jar.”

To assemble your meal, grab a bowl or plate and layer fresh greens, and a serving each of a grain, bean, vegetables, fruit — our bowls included pomegranate seeds and roasted grapes — and top with toasted seeds or nuts. Drizzle on a bit of dressing. Make your own; Dixon recommends a combination of lemon juice, Dijon mustard, olive oil, shallots, salt, pepper and honey. If you must have meat, try to make it a fish found in Arkansas’ waters. Remember: A serving is only 3 to 4 ounces.

Budhraja recommends following the guidelines set forth in the Healthy Eating Plate, created by experts at Harvard School of Public Health and Harvard Medical School. 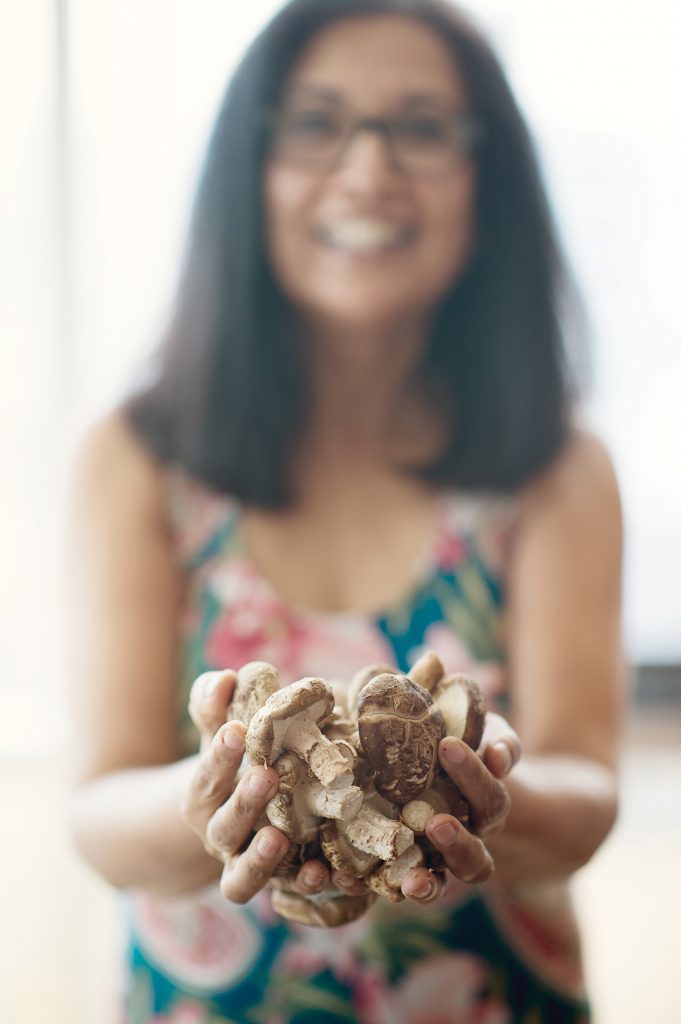 Grains that haven’t been processed — the husk hasn’t been taken away — like sorghum; faro; barley; quinoa; and brown, purple or black rice.

Legumes, such as lentils, red and white kidney beans, soybeans, adzuki and chickpeas; nuts; and seeds. You may also try the Beyond Meat products, which are made of non-GMO soy and pea protein.

Note: To help reduce flatulence, soak the beans prior to cooking.

Umami is the richness, the taste that animal products — cheese and dairy, meat, eggs, etc. — bring to food. To create that without animal products takes creativity and a bit of skill, Dixon said. She and Budhraja suggest using dehydrated, caramelized and roasted vegetables.

“Roasted tomatoes and smoked mushrooms are the easiest ways to achieve this,” Budhraja said.
“Sea vegetables, such as kelp and nori, are also a source of umami.”

Try these spices, which also have medicinal uses:

Dixon and Budhraja also recommend fermented foods. They are rich in probiotics, which aid digestion. Sauerkraut, yogurt and kombucha — a fermented tea — are common examples. Others include chutney, kefir, soy and fish sauce, relishes and ginger beer.