Feature: Get Away To Gaston’s

A great blue heron lands near the river’s edge, lurches through the shallow water and, with lightning-quick motion, grabs a small fish, swallowing it whole.

[dropcap]Wisps[/dropcap] of mist float up from the White River and shroud a solitary angler in chest-high waders. A great blue heron lands near the river’s edge, lurches through the shallow water and, with lightning-quick motion, grabs a small fish, swallowing it whole. A lightning bug flits near the tip of a visitor’s nose. Somewhere peacocks begin a call and response.

I’m taking in the surroundings from a chair behind a cottage overlooking the river. I’ve just consumed half a roasted duck and a glass of hard cider, which, combined with the abounding nature, puts me in as blissful a state as I’ve known in a long time. I soon turn in, anticipating a guided fishing outing the next morning.

Frank Saksa, who’s been a guide for 34 years— some 30 at Gaston’s — greets me at the dock at 7:30 a.m. I soon learn that he’s not only amiable, but patient, encouraging, knowledgeable and highly professional. He first asks about the kind of outing I want. I say I’d just like to catch some fish, that I fish about once every 10 years, and that my expertise has not progressed much beyond that of when I was 13 and my parents bought me a Zebco 202 to fish the murky waters of Southeast Arkansas. 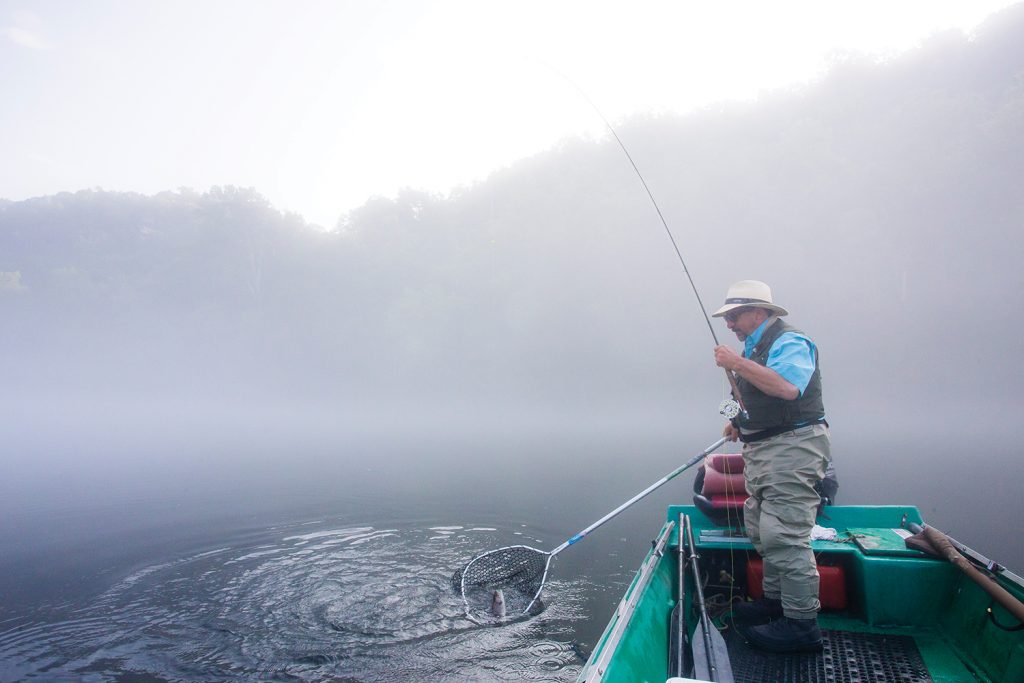 Soon we are motoring upstream in the White, whose clear waters remain about 50 degrees year round. We anchor, he gives a few instructions, and soon I’m pulling in a rainbow trout with nearly every cast. It is catch-and-release. I catch one and reel it to the boat. Saksa nets and releases it.

In talking about service, Saksa emphasizes the importance of communication. The first thing he asks a customer concerns the length of the trip: half day or whole day? 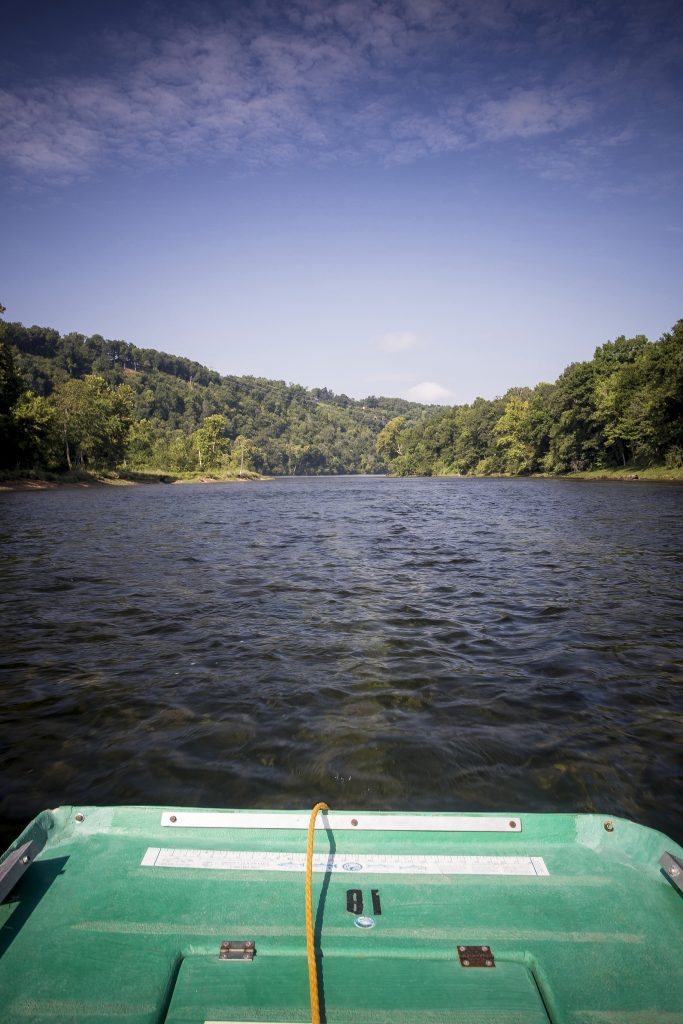 This photo made the cover of AY’s October 2016 issue.

Other topics he asks about include how many fish you want to catch, the size of the fish you desire, and whether you want to let the fish go or keep them. If you wish, Gaston’s guides will prepare the catch for you, and the restaurant will even cook it.

“Everyone fishes for different reasons,” Saksa said. “And it’s not about what I want. It’s what my customer wants to accomplish for a day. We’ve got something here for everyone, from the stone-cold beginner to the advanced fly fisherman.”

Saksa, who has fished in waters from Alaska to the Gulf of Mexico, talks about “passing it on.” His greatest enjoyment these days is teaching others about what he’s learned. Speaking of which, two days each month, from April through November, Saksa offers a fly-fishing school, taking four people per class.

“Fly fishing is getting bigger and bigger,” he said.

Too quickly, the morning passes. By around 11 a.m., we’re about three miles downstream from where we started. We head back slowly. We’ve fished three or four places, using a variety of live and artificial baits, and caught trout in each place. 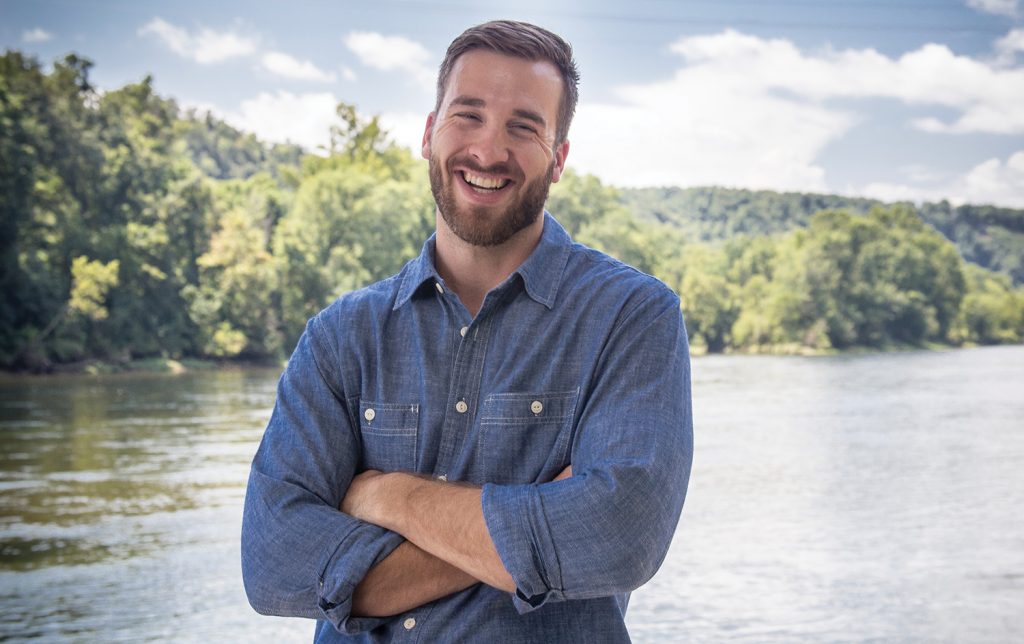 Great grandson Clint Gaston’s mission is to ensure the resort remains a first choice destination for future generations to enjoy.

Wishing I could have stayed a week, I thank Saksa and walk up the steps toward the office to chat with Clint Gaston, great-grandson of Al Gaston, who started the resort in 1958.

The original resort covered 20 acres and had six cottages. Now it encompasses more than 400 acres with 79 cottages. The cottages can accommodate everything from a couple’s weekend getaway to a big family reunion, ranging from a place with two beds to one with 10 bedrooms.

The facilities also can play host to corporate retreats, weddings and other gatherings. And if fishing isn’t your thing, there are many other attractions, among which are float trips, nature trails, a swimming pool and a tennis court.

Guests enjoy the beauty of the Ozarks while dining.

Gaston said, “Our big thing is being as accommodating as we can to all our guests’ needs.” Every year, during the off-season, resort personnel make some sort of improvements. “One of the biggest changes I’ve made is bringing in Rick [Gollinger] as the restaurant manager and executive chef. That’s one of the things that has been long overdue. He has the culinary background to put on some amazing dishes.”

Discussing the resort’s past and future, Gaston said he learned the family business literally from the ground up. “I’ve been working here since I was old enough to walk.” One of his earliest jobs was picking up cigarette butts. As he grew older, his jobs progressed to mowing grass and putting on roofs.

“This is my passion,” he added. “I love it.” Sometimes he wakes up in the middle of the night with ideas for improvements. “The biggest thing for me is to keep it going. I’m fourth generation. I want to make it eight generations.” 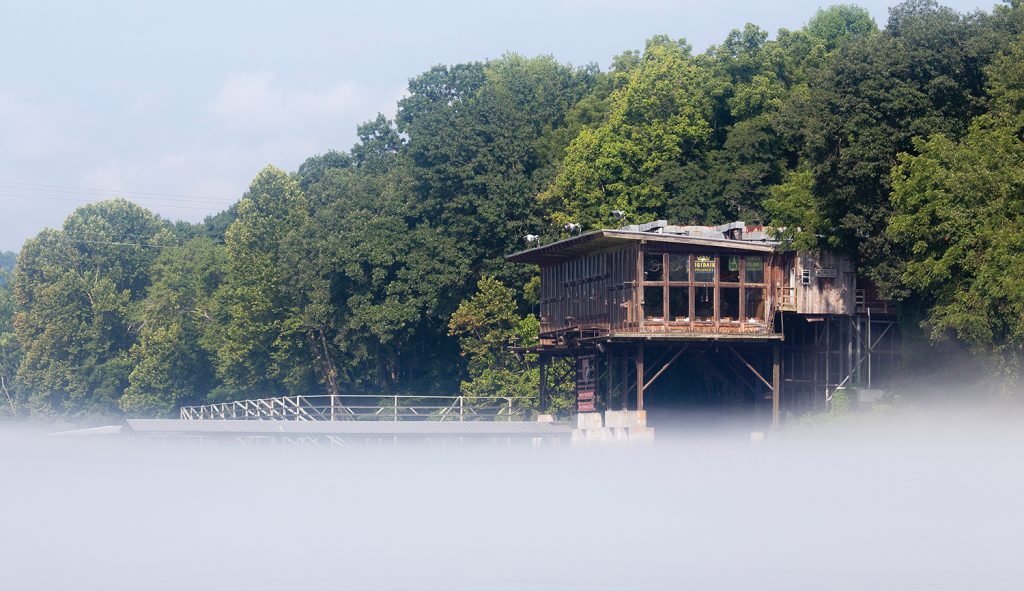 Morning fog all but covers the restaurant from view.

The aforementioned roasted duck was one of four dinner specials the evening of my visit, the others were a New York Strip steak, fried grouper cheeks and sesame tuna.

“Fantastic” was a superlative often heard from surrounding guests as they responded to Gollinger’s tableside queries about the food and service. Besides dinner, I had two lunches and a breakfast at the restaurant, and everything was quite tasty. Service was excellent. 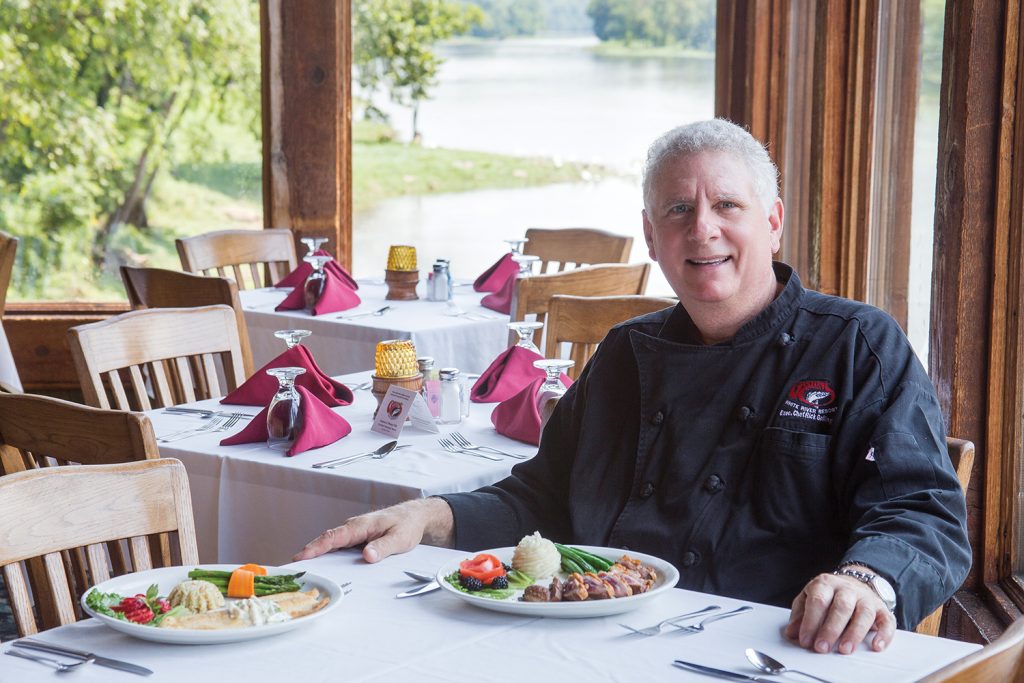 Gollinger moved to North Arkansas from Chicago when he was 14. He began cooking at a Bull Shoals restaurant in high school, after which he returned to Chicago to train to become a chef. After a career that included working in Chicago, Milwaukee and Detroit, he came back to Arkansas five years ago and began working at Big Creek Golf and Country Club at Mountain Home. He left the club in February to start at Gaston’s in March.

“This will be my last job,” Gollinger said. “I came here to Lakeview to spend the rest of my life. And Gaston’s is a beautiful place to do it.”

He added, “I love the outdoors. I love to hunt and fish, and I try to put that [love] in my food.”