His attention to detail was, in a word, incredible. His ability to achieve surprise is mindfulness defined. There’s no mistaking the artistry of E. Fay Jones, and we are honored to share with you two of his incredible designs: Stoneflower and Pine Knoll. 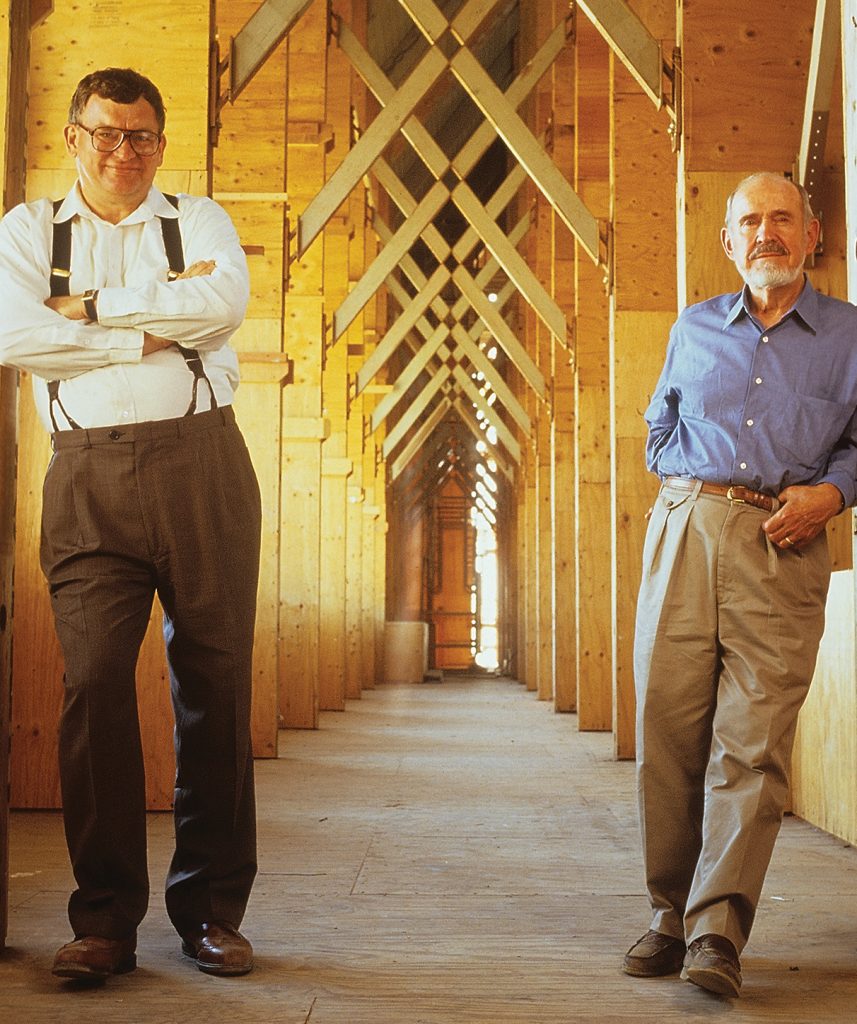 E. Fay Jones’ respect for nature and remarkable skill of incorporating his love for the organic — along with an innate sense of spatial integrity — is, to this day, unparalleled.

Jones was born in Pine Bluff in 1921 and studied engineering and architecture at the University of Arkansas at Fayetteville (UAF), where the School of Architecture and Design carries his name. He met the great Frank Lloyd Wright in 1949, and, later, Jones and wife “Gus” spent the summer in Wisconsin, where Jones apprenticed with Wright.

Jones returned to Fayetteville in 1953, and while teaching at UAF established his architectural firm. Maurice  Jennings studied with Jones as a third-year design student at the University of Arkansas at Fayetteville. Jones invited Jennings, who later became his business partner, to join his firm in 1973.

“I was fortunate to join the firm when Fay was busy with the school. He allowed me to supervise on the sites,” Jennings said. “My first project was in Mississippi. There were two other interns who worked on projects closer to Fayetteville; this allowed Fay to supervise them.”

In 1976, he invited Jennings and John Womack to become associates in the firm, and in 1986, Jennings became a partner.

Jennings, today an acclaimed architect in his own right, has been joined in business by his son Walter; their firm Maurice Jennings + Walter Jennings Architects, PLLC is located in Fayetteville.

We spoke with Jennings about Jones generally and about his experience working with the Arkansan who became world-renowned for his “soaring sacred spaces and modern homes.”

“Fay was a lot of fun to be around. It was his personality that drew me. It was a pleasure to work with him. In the 25 years I worked with Fay, he never had a bad or a harsh word to say,” Jennings said. 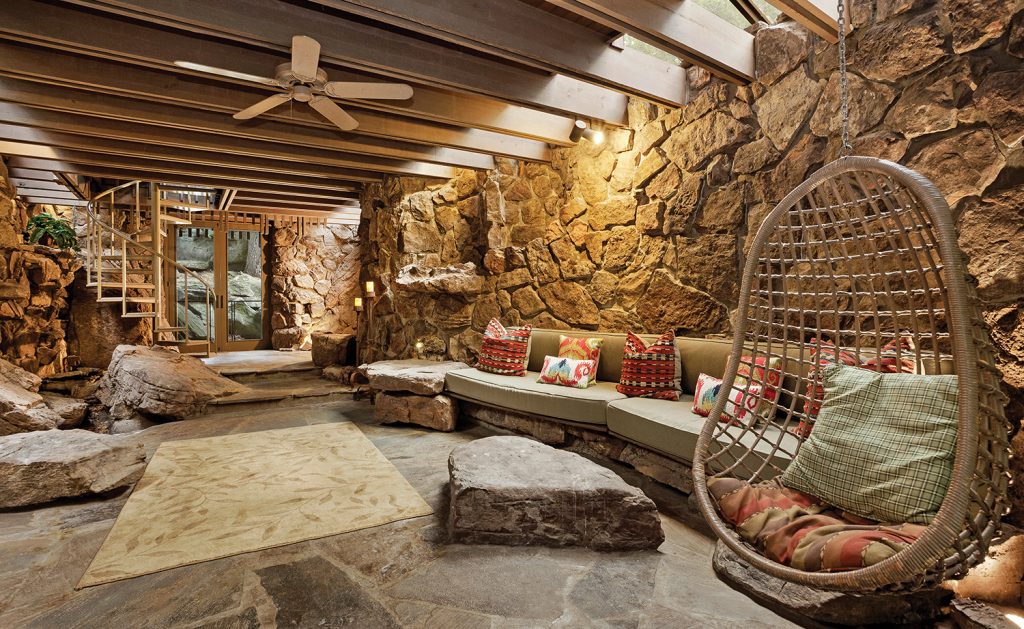 This grotto is located on the first level of Stoneflower and is a great example of Jones’ use of built-ins. A spiral staircase leads to the upper levels. The rear doors, identical to the front doors, lead to outdoor seating and to the right is a hall leading to a waterfall shower. 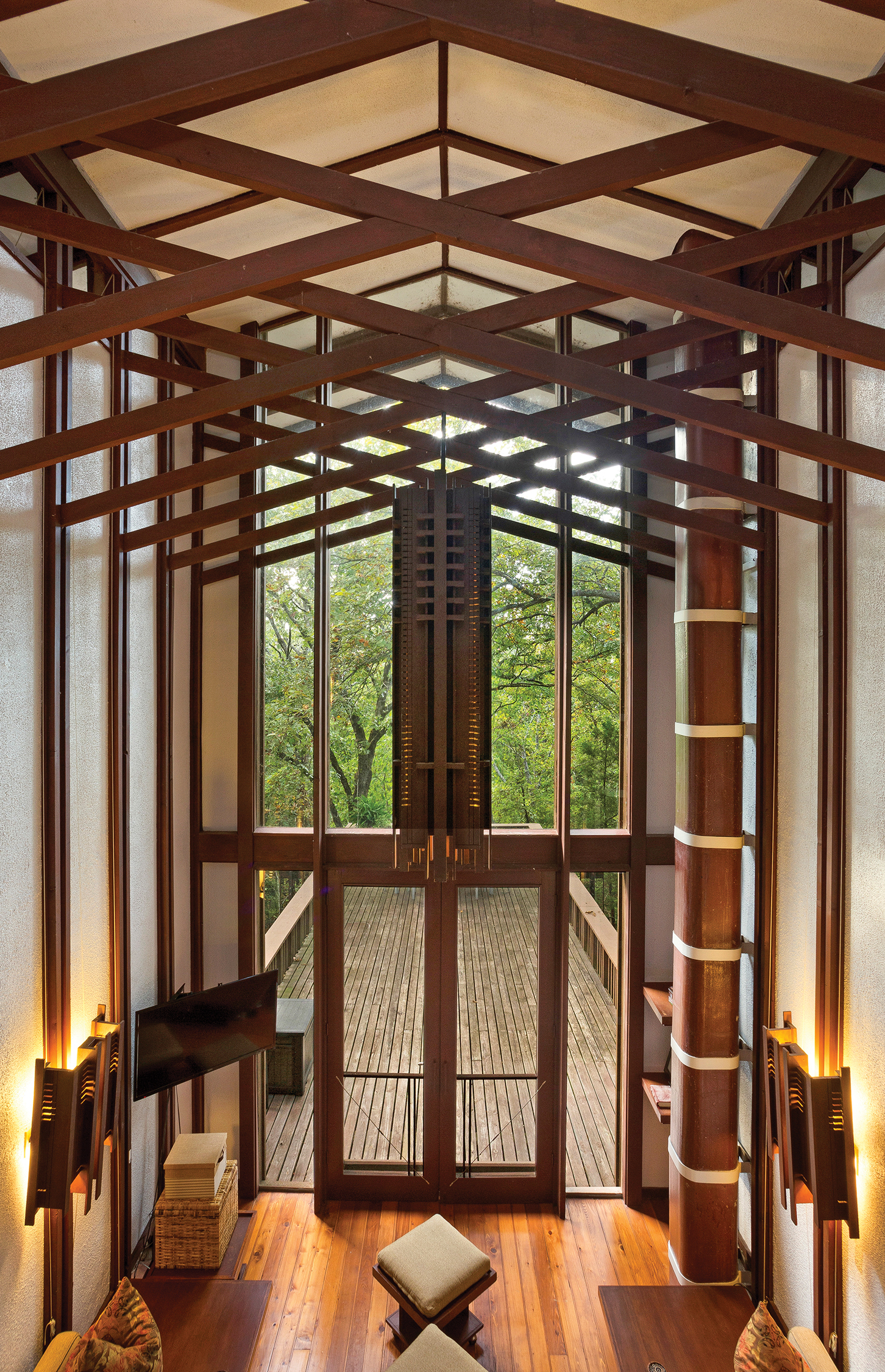 Looking out of the loft onto the main living area and deck of Stoneflower, Jones’ reverence for nature and structure is clearly displayed.

The Heber Springs native was in his junior year of high school when he first encountered a Jones work. Jennings said, “My father was a builder. He built structurally sound buildings that were a great display of well-designed craftsmanship. I was 11 or 12 years old when I started working with him after school and on weekends. I was in the eleventh grade when we went out to Eden Isle and I first saw Shaheen-Goodfellow [now known as Stoneflower]. That’s when I realized there was quite a difference between building homes and architecture. It was so compelling … it was different from anything I’d ever seen anywhere. It really took me.”

Fay designed Thorncrown Chapel [in Eureka Springs] in 1978-79. Jennings said Stoneflower was the architectural predecessor to the famous Thorncrown, and that these two projects are more alike than any other project Jones designed.

We know just how Jennings felt upon seeing Stoneflower (photo at top of page). The cottage is the ideal nature lover’s getaway. Today it’s surrounded by other homes; however, this structure, intended as a retreat, reveals itself as a departure from the everyday, a place of communion between mankind and the cosmos. It’s a three-level structure that is at once native to its setting, yet unique in its arrangement. Not an inch of space is wasted, and though constructed of stone and wood with an abundance of angular lines, the lines separating the interior and exterior are blurred and a state of bliss is easily achieved.

Yet it’s still practical. Of Jones’ talent to utilize space, Jennings said, “No space was wasted. It’s easier to capitalize and utilize the space with built-ins. We tried to break out of the box and make the space flow, to create compression and release.

“I was lucky to meet Fay, while he was working on Eden Isle. He was building the Jeter House — it’s the only house that was built more than once.” Jennings said, adding that Jones built the same home design for Dr. Jeter in both Colorado and Maryland. 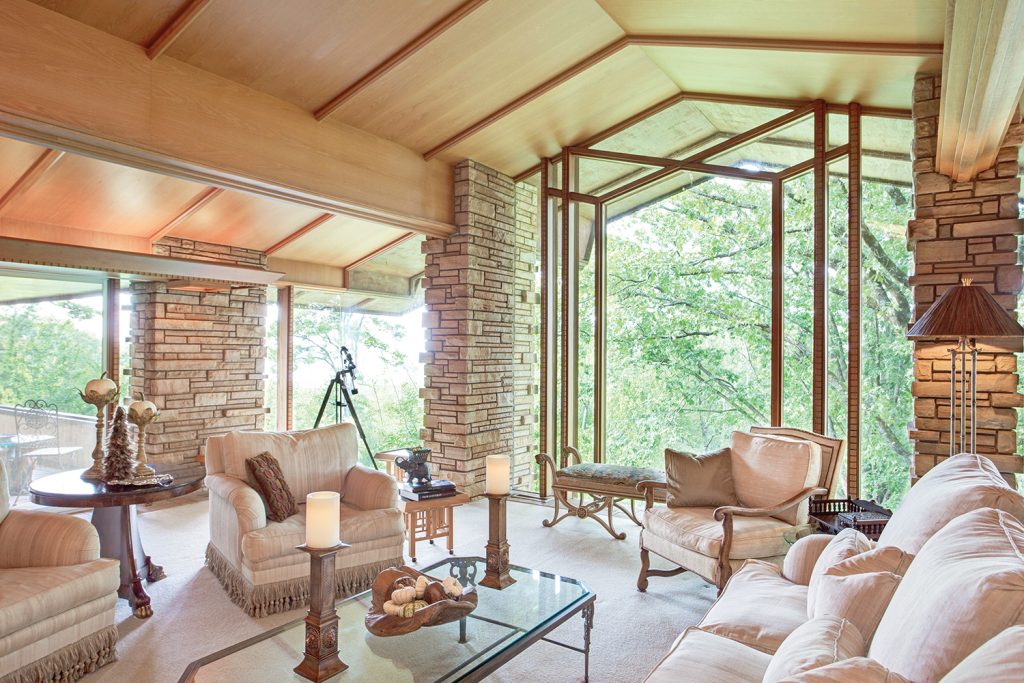 Nestled on a bluff overlooking the Arkansas river, the view from Pine Knoll is spectacular. 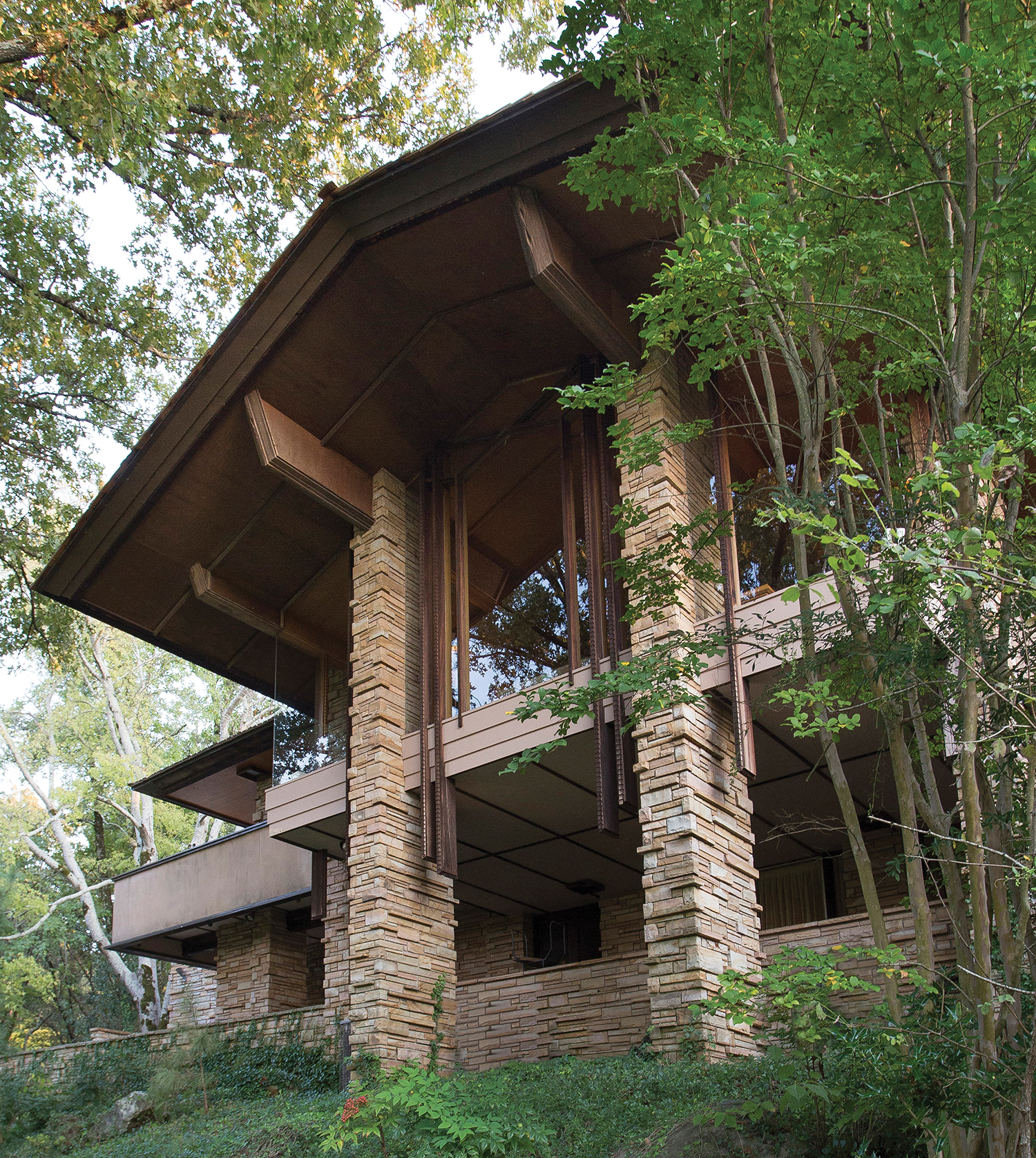 “Fay always had a real concern for site and placement in all his work. Typically in construction, people bring in equipment and create a path. Fay never did that. He treated the site gently, creating a symbiotic relationship, so the house and nature became one.”

Jennings said Jones was a master at effectively communicating with clients and contractors. “In fact, many of his very dear friends were past clients. Fay taught that in order to rise from being mere building to architecture, you needed the combination of an attentive architect, a compassionate builder and a good client. And we were very fortunate to have great clients and great builders. In fact, a past client [Don and Ellen Edmondson] was instrumental in getting the UAF architecture school named after Fay.

“Fay was just an outstanding architect. He processed things so very clearly. He was able to get to the meat of a problem quickly. That’s what architecture is: a problem-seeking, problem-solving endeavor.”

Jones designed Pine Knoll for Graham and Louise Hall. Built in 1964, the 5,200-square-foot home is made of sandstone; limestone; glass; oak; cedar; and, his requisite element, love. It’s tucked away as if designed as an oasis. Situated on a bluff overlooking the Arkansas River, the home opens to a pond, indicative of the marriage between the interior and exterior for which Jones is known.

“We spent a lot of time studying the sites before the construction began. It’s a bit more difficult to build around nature, but, in the end, the relationship is very much worth it,” Jennings explained. “He was very concerned about relating the architecture to the site. It was as if the building was a part of the whole … like they were cut from one bolt of cloth, each piece from the columns to the light fixtures all fit together.” 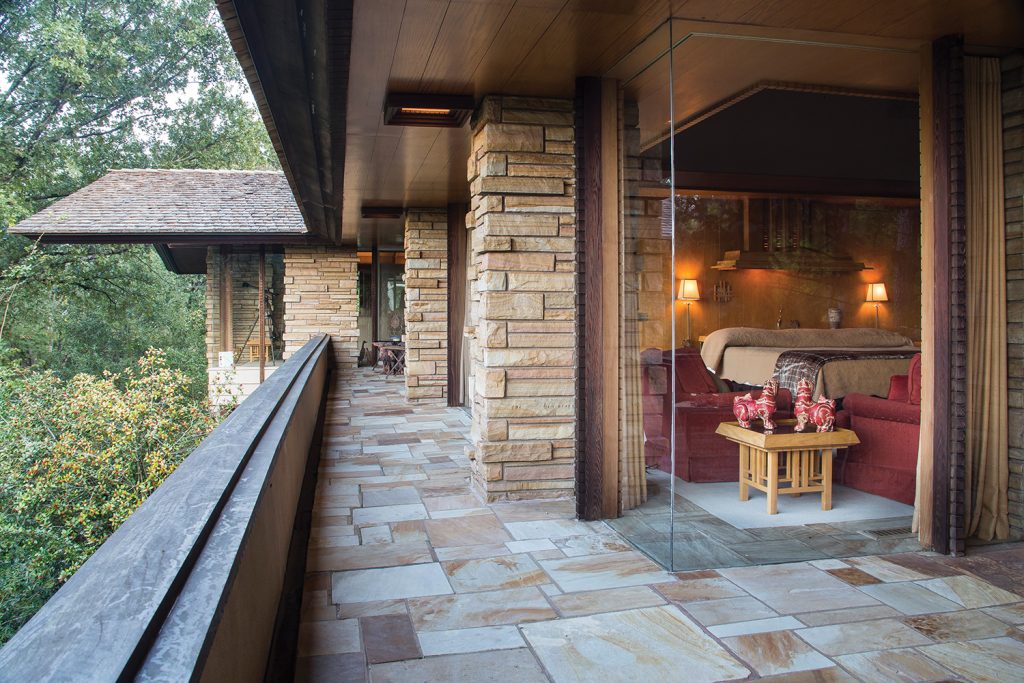 This balcony just off the master bedroom is an ideal place to view the sunset.

“How the building relates to a site is very important. Working with Fay, I always experienced growth. The more projects, the more you learned … growth and change occurred very naturally,” he continued. “The sense of entering a space is very important to design. Fay enjoyed having a sparkle that draws you from one space to another. And the use of and honesty of material is very important. Wood should look like wood.”

Gorgeous stone columns provide the backbone and glass the dressing, in concert creating frames through which to view the majesty that is Mother Nature. Sitting quietly on one of the two upper balconies — one off of the dining room, the other running the length from the entry to the master suite — or the lower balcony, which wraps around the entire second level, or even while meandering through the upper garden, one cannot help but be swept up in serenity.

That is what E. Fay Jones did. He spoke to the soul, the desire that lies in each of us to reside peacefully and blissfully both within and without. His buildings have a type of romance. It’s as if he orchestrated a dance between nature and structure. Jones designed spaces — homes, public spaces and chapels, in which we are most vulnerable, places in which our hearts are open, our souls bared and our love is on full display. And for this, we say thank you.

Thank you to Trish and Bob Mosesso for allowing us to feature Stoneflower; for information about lodging, log on to stoneflower.info.

Thank you to the family of Chuck Ensminger — Lis and Randy Ensminger — for allowing us to feature their family home Pine Knoll.