Feature: This Game Is Far From Over

For most boys, baseball is a game with individual dreams of the perfect game winning home run to the roar of the crowd. For brothers Marc and Matt Smith, their pedophile coach turned baseball into a childhood test of survival. From victim, to survivor to child advocate, the brothers are lifesaving game changers for Arkansas’ children’s safety.

Photography by Sara Edwards Neal and courtesy of the Smith family

[dropcap]Marcus[/dropcap] “Marc” Smith is a neurosurgeon. His brother Matthew “Matt” Smith is an attorney.

The two were reared in Texarkana, Arkansas, in what Matt calls a “Pollyanna world,” in a nice, quiet subdivision. They spent every weekend and summer wandering about, playing and exploring with six to eight other boys their age, leaving their homes before breakfast, returning only when hunger pangs prompted them.

Matt said he and brother Marc played just about every sport, even barrel racing and flag football. In time, baseball became more prevalent in their lives, so did baseball coach Walter Richard Roberts.

Roberts began sexually assaulting both of the Smiths, starting when the boys were 9 to 14 years of age.

His abuse of them, and countless other youngsters, went unpunished for years. Until 2011 when Marc — now a neurosurgeon, husband and father — moved back to his hometown and ran into Roberts at a local baseball field, where his son was playing baseball.

“His grandson was on a team as well. I approached him and told him not to come back. And he didn’t … until that next year,” Marc said. However, “he came back that next year and was coaching. I saw him and said to him ‘Ok, I told you never to come back. So when it comes, you’ll know just who it’s coming from.’” 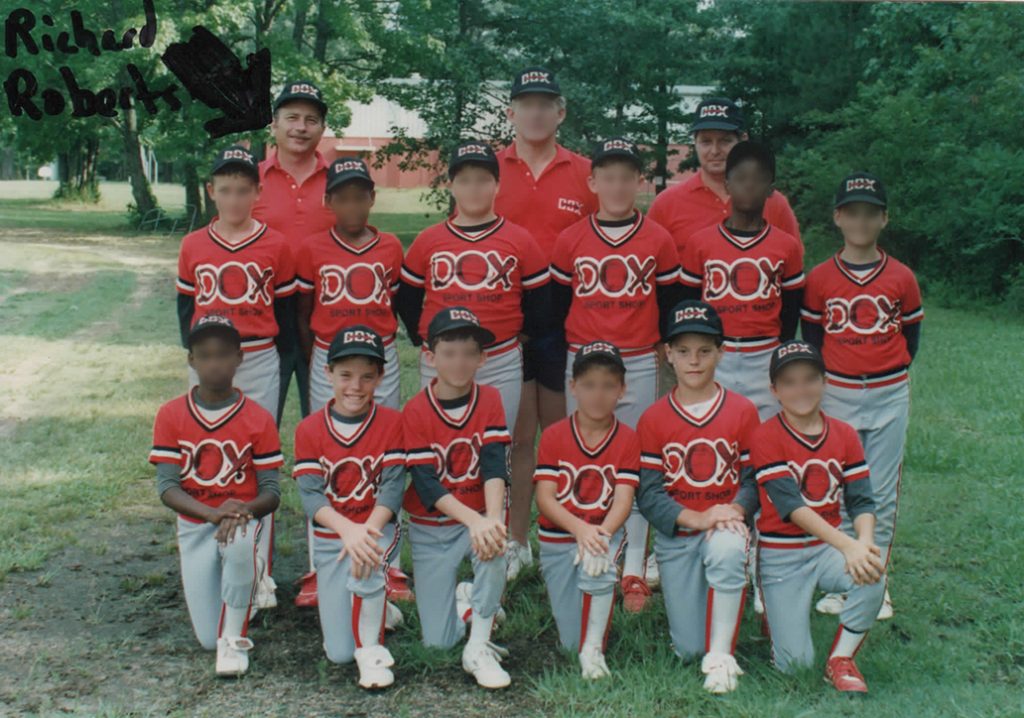 The “it” to which he referred was a police investigation. Marc called the Texarkana chief of police, who then contacted the prosecutor, and the process of punishing the predator began.

“I knew I had to come forward that next year when I saw him coaching again. And although I knew that probably too much time had passed, my motivation was to get him out of that baseball park. I called my dad,” Marc said, “and I called my brother. I assumed it happened to him.”

Matt was sitting at home, talking to his wife when he got Marc’s call — he assumed his brother was calling to plan a fishing trip. “He said, ‘I want to talk to you about Richard Roberts. He abused me, and I think he abused you. He was at the ball field. I talked to the police. They want you to come forward too,’” Matt said.

In a matter of hours what was once a well-kept secret in the community became a front-page news story in their local newspaper. Their father was, of course, distraught, especially when it seemed Roberts would not be punished due to the expiration of the statute of limitations.

Marc said, “I knew at least a dozen guys who had been sexually abused by this guy at the same time. Some were older, and we were all out of the statute of limitations.”

While Marc assumed Roberts had assaulted Matt, Matt knew he had assaulted his brother as Roberts once told him, after an occurrence, “Don’t worry. I’m just messing with ya … I messed with your brother too.”

Matt said the Texarkana police and detectives definitely did due diligence in their case. And while several men came forth, others felt there was no use as Roberts would not be punished because the statute of limitations had run out.

As fate would have it, one thing played in their favor: Roberts, when confronted by investigators, confessed that he’d taken Matt fishing just outside of Ashdown.

“It’s only about 15 miles from Texarkana to Ashdown, but U.S. Hwy. 71S goes into Texas for about two miles. He’d violated the Mann Act,” Matt said.

The Mann Act is a federal law that prohibits interstate or foreign transportation of an individual with the intent of engaging that person in sexual activity. With the assistance of many outstanding people who work in law enforcement, notably Kyra Jenner, assistant U.S. attorney, Roberts was indicted, and in fall 2012, he was sentenced to 10 years in prison.

That winter, the brothers worked with longtime family friend Jimmy Hickey, who by then was a freshman senator, to get rid of Arkansas’ statute of limitations for sexual assault. Their efforts succeeded with the passage of Act 144 of 2013.

“It was so obvious that if Roberts hadn’t taken me up Highway 71, that, yes, the police investigated and yes, his acts were exposed locally, but it was clear that he could have simply moved where no one knew and [preyed on children again]. As a parent, that scared me to death,” Matt said.

“While this law isn’t retroactive, it protects Arkansas’ children in perpetuity,” he added. “Child sexual abuse is a horrific tragedy. It was so prevalent in the past because adults would not discuss it. Now, adults are starting to discuss it, to speak openly. And that helps remove the shame from its victims.”

As a result of their brave actions, Marc and Matt received the 2015 Ronald Wilson Reagan Public Policy Award from the U.S. Department of Justice.

In October, the Children’s Advocacy Centers of Arkansas will honor the brothers with their Blue Ribbon award at this year’s Arkansas Woman of Inspiration Luncheon. The award is presented to an adult affected as a child by the trauma of abuse and who is willing to share their story to increase understanding and awareness of the reality of child abuse and neglect.

IF YOU ARE A CHILD who is the victim of sexual assault, or if you suspect a child is being abused, call the Arkansas child abuse hotline, 1-844-SAVE-A-CHILD. The 24-hour hotline is managed by the Arkansas State Police.

“For [my husband] Scott and I, any organization benefiting children and the elderly is dear to our hearts. It is sad that abuse happens. So anything that we can do to ensure children have the help they need, we will,” Copas said. “Children who are abused can suffer from PTSD [post-traumatic stress disorder] and a myriad of issues. Our goal is to ensure children get the help they need, so they aren’t still suffering from trauma as they get further into life.”

Funds from last year’s inaugural luncheon, honoring Arkansas First Lady Susan Hutchinson, was used in various ways, including in helping to fund the opening of additional centers in Arkansas. This year’s Woman of Inspiration is Johnelle Hunt, who generously shares her care and time to numerous organizations in addition to providing philanthropic support and leading fundraising efforts to the benefit of families across Arkansas. Copas said, “Our goal is to raise more than $400,000 through in-kind gifts, the auction and donations, so we can join the Children’s Advocacy Center of Arkansas in its mission that no child will have to drive more than 1 hour to receive the help he or she needs.”

Tess Fletcher is president of the board of directors for the Children’s Advocacy Center of Arkansas. “These funds are so important to us. One way in which we’ll benefit is in being able to expand our services. The 15 advocacy centers, each its own nonprofit, has relationships with multiple disciplinary partners, such as the Arkansas State Police; the Crimes Against Children Division at the State Police; the Department of Human Services; medical and mental health professionals; and law enforcement. Additional funds will help provide training opportunities to help with the expansion of these services. We provide, at no cost, forensic interviews, orders of protection, sexual assault exams and more.”

These critical services can be vital for children. Matt Smith will attest to the fact that sexual assault causes “long lasting damage to a child. I was a victim until spring 2012. Shortly thereafter, I became a survivor.”

The 2016 Arkansas Woman of Inspiration luncheon will be held on Oct. 13 at the Statehouse Convention Center. Check-in and the silent auction begins at 10:30 a.m., lunch at 11:30 a.m. Tickets are $150 per person.  Online bids for silent auction items will open two weeks prior to the luncheon. Call 501.615.8633 for more information or to purchase tickets.

The look of sexual abuse

According to Stacy Thompson, CPA, and executive director of the Children’s Advocacy Centers of Arkansas, child abuse knows no discrimination leaving any child potentially vulnerable to such trauma. “Arkansas Advocacy Centers saw more than 5,000 children this past year impacted by sexual abuse.” According to Thompson, more than 75 percent of those victims are Caucasian, female with an average age of 9.

The heartbreak of child sexual abuse is the typical abuser is not the stereotypical creepy guy in a van with a puppy attempting to lure little ones away. “Ninety percent of the perpetrators are people the child knows, trusts and loves,” according to Thompson.

With more public education and awareness, helped with advocates like Matt and Marc Smith, more reporting of abuse is occurring. Currently there are 15 advocacy centers across Arkansas. With children seen at the center last year from each of the state’s 75 counties, the need for more centers is critical.

“Once the Arkansas State Police establishes a case of abuse, the child and family is referred to Children’s Advocacy Centers of Arkansas,” stated Thompson. “We are able to reduce the stress and trauma for the affected child and their family by bringing together all of the partners involved in seeing their case through from start to finish.”