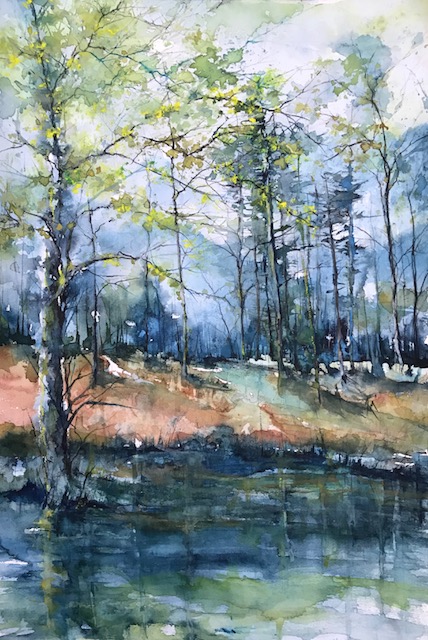 FAYETTEVILLE – Artists’ collective Fenix Fayetteville celebrates the establishment of its permanent location Thursday, May 3, with a grand opening reception entitled “From the Ashes.” Showcasing an eclectic array of works from participating artists, the event will include musical guests Nikola Radan and Emily Kaitz, food and drinks, and live painting inside and outside the venue.
Situated off the downtown Fayetteville Square, the new 2,300-square foot Fenix Fayetteville site is entered from Center Street via the pedestrian walkway between Arvest Bank and 16 W Center. Member-artists have been preparing for the opening, sheet-rocking, painting, pulling out unnecessary wiring, and repairing the original pressed tin ceiling. In addition to the interior exhibition space, Fenix has reached an agreement with Arvest Bank to utilize the space’s outdoor walkway, a pedestrian thoroughfare from Block Street to the Square. The walkway will offer an outdoor complement to the collective’s interior exhibition space and create public engagement with genre-blended art.
The leased space also includes an additional 2,500 square foot basement, the DownUnder, which, as the collective moves forward, will expand Fenix’s ability to host installations and performances, as well as provide studio space for Fenix artists needing a large, open workspace.
The event follows “Intersections,” a series of visual art and creative events by artists identifying as women which was launched at the April 3 soft opening of the new Fenix space. The project embraces the interwoven aspects of female identity. Partnering with Stage Eighteen and two of Fenix’s performing arts members, Inverse and ArkansasStaged.
“All this has been possible due to the efforts of hard-working Fenix member-volunteers,” says Jeannie Parham, Fenix Fayetteville curator and organizer. Fenix’s members are practicing artists, experienced in art education, accountancy, communication, marketing, and graphic arts. They operate with “the philosophy of an artist-centric collective that returns value to the artists,” adds Parham, “who make a community where there is always an array of art across genres to see and experience.“
The grand opening marks an important moment in an evolving Northwest Arkansas creative community. Amid the region’s growing and vibrant arts scene, Fenix is experiencing a rebirth as it establishes its permanent nest.
About Fenix Fayetteville
A self-governing group of emerging and established visual artists working in all disciplines, Fenix Fayetteville was founded in 2016. The cooperative is committed to a culture of mutual support, community and collaboration. Members add their own vibrant voices to the creative culture growing in Northwest Arkansas, contribute to the active arts scene and serve the community through their creative and educational work.