Just about everyone loves the movies, but how many people can say that they love making movies? It certainly takes a special type of person — someone who can think artistically and technically, who can take the initiative and work well as part of a team. A movie typically needs (at least!) dozens of passionate people working on it in order for the movie to be anything worth watching.

Yet the film industry continuously fails to hire women to fill these vital roles. Only 29 percent of all directors, producers, writers and behind-the-scenes workers who work in narrative films are women. Documentary films do slightly better, with 34 percent of those employees being women. It’s a glaring disparity in representation. There are plenty of amazing women who work in film; for example, Jessica Chastain visited Arkansas for the Arkansas Cinema Society’s Filmland festival just this past October. So it’s not as if women never are able to make it in the industry. Many simply never receive the chance to work on a movie, to hone their love for the craft. They rarely get the chance to develop their art and work on their skills, and thus, the disparity between men and women in film persists.

Fortunately, the ACS is playing its part in working to overcome the gap. After two years online, the ACS’ Filmmaking Lab for Teen Girls is returning to in-person meetings this year, and there’s still plenty of time to sign up. The ACS has extended application deadlines to March, and there are still slots left.

For those unfamiliar, the ACS puts on this lab every year in the summer, for Arkansas teen girls aged 16-18. Rachel Norris, ACS’ Director of Education, gave us a brief breakdown of how the program works.

“During the Lab, they attend master classes on all facets of filmmaking including screenwriting, cinematography, production design, directing, producing, lighting, costume design, editing and music composition, among others,” Norris says.

During the second week of the Lab, the girls begin working on their own short film script. Participants collectively create an idea for a movie, and even work alongside a local casting director to select professional actors to work with them.

“The third week is focused on pre-production preparations and filming the short. The fourth and fifth weeks of the program are all about post-production: editing the film, working with a professional composer to score the film, and working with sound designers to place key sound effects,” Norris says.

By the end of the Lab, the girls have all worked together to create a short film alongside industry professionals, an opportunity that most people don’t receive until they go to film school, if ever. 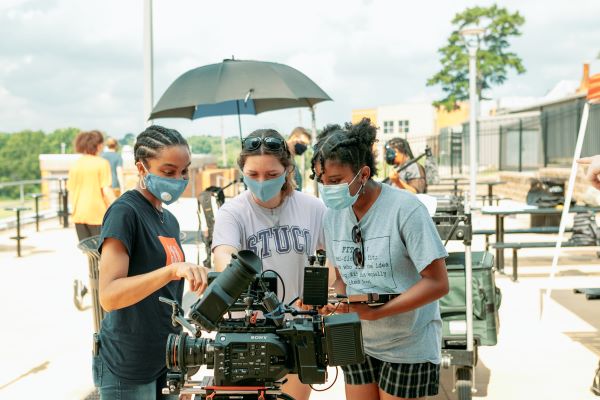 Speaking of film school, we also had the chance to speak with an alumnus of the Lab program named Leela Becker. She is in her second year in the Film BFA Program at the University of North Carolina School of the Arts, one of the top 10 film conservatories in the country. Due to her dad doing a lot of work in mass communications, she grew up in a house with plenty of cameras, and remembers making some of her first films on a little flip phone with her brother at their family home. She truly found her passion for filmmaking in high school.

“I went to Bryant High School, which luckily enough had a three-course film program,” Becker says. “This program allowed us the time and space to explore our interest in film and media production. I’m incredibly grateful to Nicole Inman, who taught those classes, for her support in our pursuit of careers in the film and media industries.”

Becker attributes much of her success to mentors who were there for her early on like Inman (who unfortunately passed away of brain cancer last year), as well as those she met during the ACS Lab program. Becker speaks highly of the ACS Lab, and believes it had a profound impact on her career.

“This program helped me find my passion and my purpose in life, and even if you don’t end up going into the industry afterward, you’ll still have made great relationships, and you’ll leave with a finished product that you really love and that means a lot to you,” she says. “My time spent in the film lab was genuinely the best few weeks of my high school experience.”

When asked what she would say to anyone thinking of signing up for the program, she states simply, “If you’ve considered applying at any moment, just do it.”

There’s still time to apply for this unique and important program; the application period has been extended to March 1. Applicants must be 16 to 18 years old, be an Arkansas resident, be able to drive to Little Rock and provide proof of COVID-19 vaccination. A link to the site where you can apply can be found here.

There is no application fee, but if you’d like to support the Lab and other wonderful programs put on by ACS, donations are always accepted on its website.