The Final Cake: Heather Baker and Lisa Fischer Draw Contest to a Close

All good things eventually come to a close, and the “Heather and Lisa Eat Cake Because It’s Heather’s Birthday” contest has almost arrived at its end. During September, AY Publisher Heather Baker and AY Editor-at-Large Lisa Fischer have been doing their culinary duty by tasting the best cakes that Arkansas has to offer.

The goal of the contest is to taste 10 cakes in honor of Baker’s birthday and choose one as the grand prize winner. So far, the pair has eaten nine cakes. They’re down to the final one.

“We’ve been eating cake in honor of Heather’s birthday. Her birthday is coming up tomorrow, Tuesday. This is our last cake,” Fischer says.

For the final cake, Baker and Fischer decide to get artsy. They chose a lemon cake filled with a raspberry American buttercream and surrounded with lemon Swiss meringue buttercream. The cake also has a surprise – a fresh raspberry filling.

Before slicing into the cake, Baker and Fischer take time to admire the exterior of the cake, noting its artistry. “I love the way this is designed,” Baker says. “All the artwork in my house looks like this. This is very artistic.” 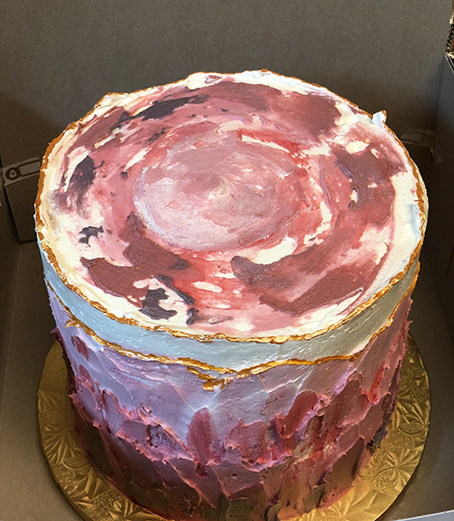 But, of course, the cake must be cut! It’s a tall cake, with one slice providing enough cake for both Baker and Fischer. The raspberry filling is revealed with the cut. “It’s even oozing raspberry,” Fischer says.

The highlight of the cake for the duo is the raspberries, which gives the cake a tartness. “She has fresh raspberries inside the meringue,” Fischer says. “That’s really unusual, and it’s really beautiful.”

After tasting the cake, Baker and Fischer prepare for the final part of the contest: judging. While Baker says she has a good idea of her winner, Fischer hedges her bets. “I’m torn between two cakes,” Fischer says.

“This is it, folks. This is the tenth cake. Lisa and I will be putting our brains together [to decide the winner],” Baker says.

But don’t fret because the contest is over! We still have to announce the winner.

All of the cakes will be judged according to presentation, taste and creativity. A winner will be Sept. 24 – Baker’s birthday!