You might call the past few months the Summer of Sonny’s Cemetery Tours.

[dropcap]My[/dropcap] old friend Mack and I have renewed a practice we loved in high school: wandering Arkansas’ highways and back roads, averaging about a trip a week. I’m not sure what this says about us, but a lot of those trips included cemetery stops.

Among those was a mysterious, one-grave burial site at Judsonia in White County. If you’ve ever traveled U.S. 67-167 in this part of the state, you may have seen it. It’s on a wedge of land beside the ramp that motorists take from Arkansas 157 to go north onto U.S. 67-167.

I first noticed the grave sometime back in the 1970s during my travels as a newspaper reporter. I passed it many times and wanted to check it out — you don’t see many graves right next to a freeway — but I was always in too big a hurry to get somewhere, then get back to the office and meet a deadline.

So, on a morning in June, Mack and I made the grave our destination. We pulled off onto the ramp’s shoulder, and with some effort opened the gate to the chain-link enclosure surrounding the site.

Sun-bleached stones outlined the small grave. Next to the headstone lay a bouquet of plastic flowers, along with a few marbles and weather-beaten stuffed animals. Coins, 60 in all, topped the headstone. A cross and more stuffed animals decorated the fence. 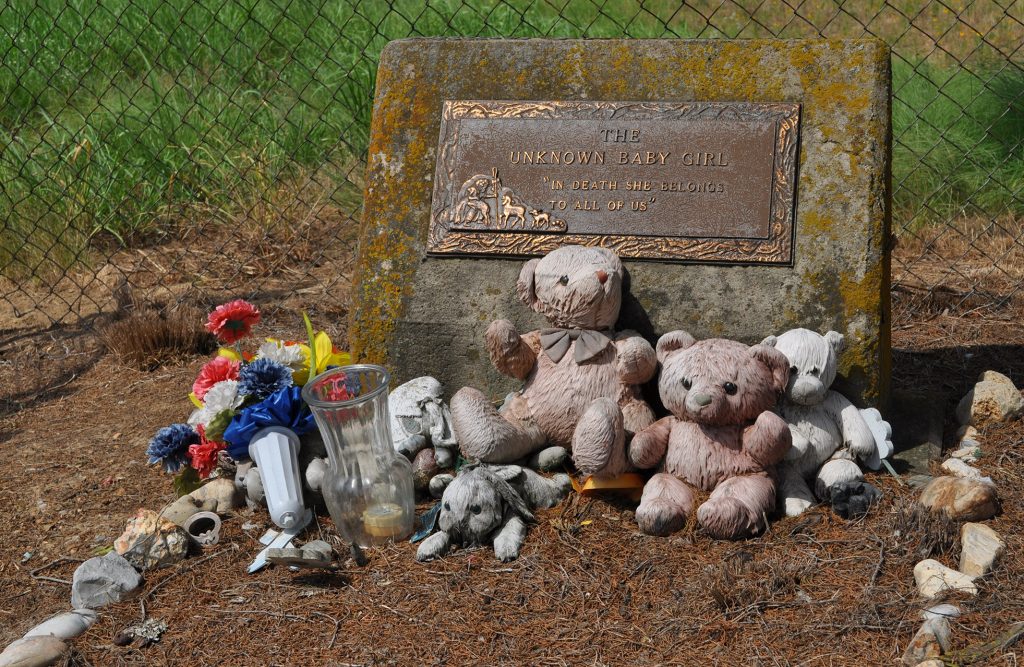 Next to the grave was a solitary evergreen tree. Someone had nailed an angel figurine to it. A wind chime hung from a large nail in the tree’s side.

The headstone inscription read: “The Unknown Baby Girl: ‘In death she belongs to all of us.’”

I posted a picture on Facebook, asking if anyone knew anything about the grave.

Several posted a link to an article that appeared in the Arkansas Democrat-Gazette in 2011. Several more provided a link to a piece written by the late president of the White County Historical Society.

The newspaper story’s headline read, “Legends abound over little girl’s grave.” The article stated that, according to White County Historical Society records, the child was about 2 years old when she died in 1890 or 1891. It quoted an Arkansas Highway and Transportation Department employee whose crew maintained the grave. He’d first heard stories about the girl when he was a child; she had fallen out of a highchair onto a fork. Another interviewee had heard a similar story, but in that telling the girl had fallen on a knife. Yet another interviewee heard the girl had died while coming through the area with a wagon train.

There also were differing explanations of how the headstone got there. One was that the highway department placed it there. Another was that a fellow named Harris did it.

In passing along a similar variety of stories about the girl’s identity, White County historian W.E. Orr provided one possible inkling to who she was. He referred to a person who years earlier had heard a tale of the girl and had “reasons to believe” her name was “Cousins.” He’d written the name in a ledger, but there was no clue to the child’s first name.

Orr, who died in 1997, excerpted a newspaper editorial that appeared in Judsonia’s White County Record in July 1972: “Even with the additional data revealed in today’s Record columns, the child remains unknown. In a sense, then, she belongs to all of us — to parents who can translate her early death into the worst of their fears; to those who are without children; to those who remember when their own offspring were toddlers; and to each and every one of us who holds fast to our earliest memories of those happy days when we, too, gazed around in wonder at a world that was much too big for us.”

Though we may never learn the real story of that little grave next to the freeway, it gladdens my heart to know that folks bearing plastic flowers and stuffed animals care enough to remember a child they never knew.