If you’ve kept up with my musings in this space, you might have concluded that I’m a history buff. You’d be right. 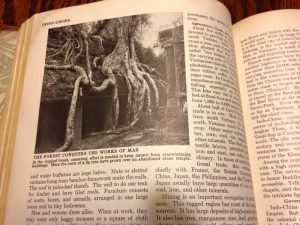 Photograph of the same tree in Compton’s Pictured Encyclopedia.

[dropcap]There’s[/dropcap]  just something about antiquity that excites me — for as far back as I can remember, even before I could read.

In 1957, when I was 4, my mother bought a set of encyclopedias. They opened a whole new realm of imagination for me. Suddenly, within easy reach, were portals to worlds far more exciting than stories about ducks, puppies and gingerbread men. I would lie on the floor for long periods, studying the photographs and illustrations depicting ancient people and the things they created: cave paintings, sculptures, pyramids, temples and more. Especially captivating was a photograph of an enormous tree growing out of a temple, the roots draping down the structure’s side like the arms of an octopus.

I could not have articulated it then, but I was struck by nature’s ability to overtake artifacts.  I’m still awed by that ability, whether it is vines engulfing a jungle monument or kudzu covering a Delta shack.

Last spring I was able to indulge my love of history like never before. Thanks to an old friend from college, a Vietnam War veteran who organizes trips to Southeast Asia, I took a tour of Vietnam and Cambodia, seeing many remarkable things.

Among them was a place I’d wanted to visit for decades: Angkor Wat, a temple complex in Cambodia that was the crown jewel of Angkor, capital of the Khmer Empire from roughly the ninth to the 15th centuries.

The temple, shaped like a lotus bud, is the world’s largest religious monument, standing majestically on some 200 acres enclosed by a wall. Made mainly of huge sandstone blocks, the complex has five towers; the tallest is 213 feet. Built in the 12th century, the temple originally was dedicated to the Hindu god Vishnu but later became a Buddhist temple. It abounds with artwork, which includes intricate bas-relief depictions of epic events in Hindu mythology. The precision it took to build and adorn this place is astounding.

But I’ve leapt a little ahead of myself. The most mystical part of this trip actually began a month or so before I left the States, starting one evening as I sat in my easy chair poring over travel literature. Our itinerary included a stop at Ta Prohm, one of many temples in the Angkor area abandoned for centuries and consumed by the jungle until European explorers stumbled upon them in the 1800s. I learned that at Ta Prohm the jungle had not been cut back as much as elsewhere. Then I read this: “There are enormous fig trees … which embrace themselves in the stone foundations of the structure, giving the impression of man’s creation being reclaimed by the powerful forces of nature.”

A long-dormant memory awoke. Bounding out of the chair, I hustled down the hall to my office, where the encyclopedias my mother bought long ago now sit on a shelf. It took a few minutes, but I found the picture on Page 164 of the I-J volume  — “I” for Indo-China — of Compton’s Pictured Encyclopedia. The caption stated: “In the tropical forest, ceaseless effort is needed to keep nature from overwhelming the buildings. Here the roots of a fig tree have grown over an abandoned stone temple.” Fig tree? Temple? I wondered if that picture could have been taken at Ta Prohm. The book didn’t specify. So I turned to the Internet to find pictures of the temple. And there was THE tree. Was it possible it still stood, and would I be able to actually step into the scene that had so fascinated me way back when?

Sure enough, on June 8 the preschooler and the, ahem, rather mature journalist came together for a few transcendent moments. As if posing with an old friend, I stood in front of my tree while a guide took my picture (photo of fig tree at top of page). The experience was awesome and slightly surreal. The tree looked much like it did more than half a century ago and appeared likely to stand long after I’m gone.

A child’s imagination is an amazing thing. Mine took me to Ta Prohm long before I knew it existed. I am very grateful to my mother for that. As adults, each of us has opportunities to do things to inspire a young person’s imagination. You might try it — you never know where that imagination might lead.

Tree stories? Email me with your stories at [email protected].