Finding A Way Out

When the subject is addiction, it doesn’t take a whole lot to get Dori Haddock rolling. As regional director for Bradford Health Services, a multi-phase substance abuse treatment company that also works in mental health, she sees daily the impact that addiction has on families from every sector of society. She’s watched as the never-ending queue of patients — people whose lives have been interrupted by alcohol, pharmaceuticals or illicit drugs — curl through the company’s door. She sees well-paid professionals who have laid low; people struggling to get clean even as their spouses keep using; individuals at the end of a string of second chances.

Along the way, she’s gained much insight into the human psyche and how difficult it is to break out of self-destructive cycles, even as an addict’s behavior damages themselves and others.

“When we see people getting well, it’s usually not for themselves, it’s usually an external factor that gets people motivated for treatment,” she says. “It may be that your spouse goes and gets sober and then all of a sudden you’re forced to look at yourself and do something different or you’re going to lose everything.

“I would say for 80 percent of the people who walk through our door for an appointment to see if they want to come in, something external has brought them there — a spouse, a parent, a car accident, a DWI, legal charges, work said you’re about to lose your job. It’s very rare that we get the patient just walking in our door like, ‘Woo hoo! I’m ready for treatment today!’ Our job is to motivate them and get them to see what’s going on.”

Addiction still carries a stigma in the United States, even as the number of addicts has steadily climbed. The latest statistics from the National Survey on Drug Use and Health, released this year, reported 20 million Americans battling substance use disorder in 2017. Nearly three-quarters of these cases were for alcohol, while 1 in 8 struggled with both alcohol and drug use.

Arkansas had traditionally ranked poorly when it comes to substance abuse and a report released this summer by WalletHub continued this sobering trend. Among Arkansas’ dubious distinctions included ranking highest in the percentage of teenagers who were offered, sold or given an illegal drug on school property, (30.7 percent) and among the highest percentages of children living with someone with a drug or alcohol abuse issue (12 percent). Arkansas was also cited for the most clandestine drug laboratories or dumpsites and for 105 opioid prescriptions dispensed per 100 people, the second-highest rate in the country.

But when it comes to dissecting the physiological and mental components that comprise addiction, the disease is much more complex than simple access to and use of alcohol and drugs, Haddock says.

“We know for sure one of the things that makes somebody more predisposed is genetics,” she says. “If you’ve got an immediate family member who is already struggling with substance abuse addiction, you have a 50 percent chance of that being an issue for yourself.

“The other main factors that contribute to addiction becoming a disease has to do with the neurotransmitter pathways being dysregulated. The things that can dysregulate them is genetics, but also adverse childhood experiences such as trauma or abuse. Head injuries are another thing; we see a lot of professional athletes who are in contact sports who have significant substance abuse issues.” 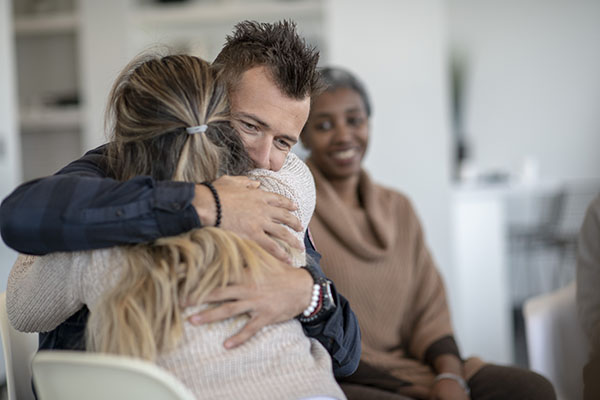 On the subject of trauma that triggers addiction, the status of the state is grim. The Child Welfare League of America compiled statistics last year that noted 55,000 reports of child abuse and neglect were made in Arkansas in 2016, which translated to just under 10,000 child abuse victims — or 14 per 1,000 children — a nearly 6 percent increase from 2015.

“There’s a lot of research that definitely goes back to trauma and adverse childhood experiences,” Haddock says. “That may be divorce, physical abuse, sexual abuse, mental abuse, emotional abuse … There’s definitely a cyclical pattern. If you’re being raised in the home of an alcoholic or an addict, then you’re going to be more likely to experience some of those more adverse childhood experiences which also puts you on the spectrum.

Such contributing factors might suggest addiction is strictly a mental disease. In fact, the condition is much hazier with both physical and psychological components to it. The American Medical Association’s official label for addiction is “a brain disorder” which only underscores the duality of the condition and makes determining what qualifies someone as “officially” addicted something of a moving target.

“One way I heard it put was, anything you attempt to control, you may have a problem with,” says Brooks Higginbotham, a therapist with The BridgeWay in North Little Rock. “Drinking and drugging starts to control you, your scenarios, your environment, your psyche, your persona — everything about you. The brain has become completely rewired.

“Alcohol and drugs hijack the brain’s reward system and give it this intense release of pleasure, dopamine, and it causes you to want to repeat the experience over and over and over again. It’s a sensation called euphoric recall. It blocks out the negative experiences, and it accentuates the positive experiences. People will chase that forever.”

Treating the physical attachments that have developed over time, known as detoxification, or detox, is only one part of the solution. Addiction professionals agree detox must be paired with rehabilitation, or rehab, to break the cycle, preferably over a long period of time. Rehab reaches beyond the physical to the psychological side of addiction including what’s spurring the patient to use in the first place.

“We provide partial hospitalization which is 9 a.m. to 3 p.m., Monday through Friday, with variances of treatments,” Higginbotham says. “We can also do intensive outpatient treatment, which is three hours a day, four days a week. Those are meant to help address some of the underlying issues as to why people became addicted and to provide some accountability.”

Patients sometimes have to take drastic measures to gain and maintain their sobriety. It might mean changing workplaces or social groups or even getting out of relationships — including marriages — that do little more than act as a trigger for addictive behavior. But no matter what pieces of life they shed, Higginbotham says, recovery can only happen with a patient’s willingness to point the finger at themselves.