We’re off to Neverland! But before we get there, it has to be created first!
In Finding Neverland, the newest musical to grace the stage of Robinson Performance Hall, playwright J.M. Barrie is struggling for inspiration for his next play. He is searching for the strength and spark to become the man he believes he can be.
He soon meets a young family composed of a young widow and her four young sons. The family becomes his closest companions and playmates, and the boys light the Barrie’s creative fires. Barrie begins the work that will define his legacy – the creation of Peter Pan and Neverland.
The musical is based on the 2004 Academy Award-winning film of the same name, starring Johnny Depp and Kate Winslet. The original play, with music and lyrics by Scott Frankel and Michael Korie and a book by James Graham, ran on Broadway for 17 months and is now touring nationally. 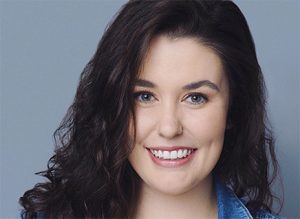 Taking on the role of Sylvia Llewelyn Davies, the young boys’ mother, is Ruby Gibbs. A recent college graduate, Gibbs is taking ownership of a role made famous on film and stage and putting her own stamp it.
As part of her preparation for the role, Gibbs delved into Sylvia’s backstory to figure out what makes her character tick. According to Gibbs, Sylvia’s backstory is that she was raised in a loving, playful home with her father and mother. However, her father died at an earlier age, leaving her and her mother alone. Her mother, Mrs. Du Maurier, never recovered from the loss.
“Her mother turned into a very cold, rigid person after her loss. She lost that sense of joy and playfulness,” Gibbs says.
Sylvia’s life mirrors her mother’s, as her husband also dies early, leaving her to tend to four high-spirited boys. This sets up a choice for Sylvia: to become like her mother or to remain grounded and engaged in her sons’ lives.
“She has a choice. She has a choice to become like her mother and to disengage from her boys and focus only on her loss. Or she can see the positive side. Yes, she lost her husband, but she has four beautiful boys who have so much of her husband in them,” Gibbs says.
Joy, though, is never experienced without pain. As her character Sylvia learns, she has the joy of her children and the pain of losing her husband. Her loss allows her to appreciate what she has, and her joy makes the pain keenly felt.
“That’s the magic of this: there’s such great joy in the show and such great loss. It’s kind of like a shadow. Without shadows, there is no light. You have to have the grief to experience the joy, and you have to have the joy to experience the grief, as well,” Gibbs says.
One of the major takeaways in the musical, Gibbs says, is the importance of staying positive and imaginative in life. While three of Sylvia’s sons have remained positive after their father’s death, one son, Peter, has taken his death hard and grown up too quickly. 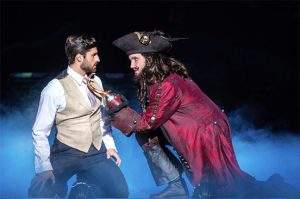 “Everything is serious, everything is realistic and logical for him,” she says.
With Barrie’s help, Sylvia works to show him that there’s more to the world than seriousness and pain.
But these lessons aren’t limited to the stage. While there are fantastic special effects on stage – from flying to a glitter tornado – the effects only work if audience members are willing to suspend their disbelief and accept the magic they see.
“As an audience member, there’s so much on stage that’s magical. There’s flying across the stage, there’s a glitter tornado,” she says. “There’s all of these things that are absolutely stunning, but you have to use your imagination to believe. You have to take yourself out of reality…
Before stepping into Sylvia’s shoes, Gibbs had seen the 2004 film, in which Kate Winslet plays her role. The movie, she says, had a major impact on her and her family (“It hit us hard.”), and she watched it shortly before rehearsals. However, the film and musical have “vast differences,” she says.
The musical offers a “brighter” take on the material, as well as providing more complexity and deeper character development, Gibbs says. In addition, the relationship between Barrie and Sylvia is deepened.
Of course, it wouldn’t be a musical about the creation of Neverland without a few Lost Boys, represented by Sylvia’s sons. Six young boys alternate playing the four sons, and Gibbs praises their dedication and skill. “They are stunning. They’re such wonderful boys,” she says. 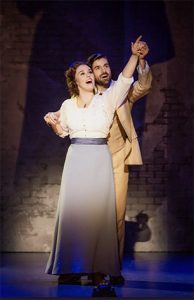 She’s the mother on stage, but offstage is a different matter. She says she’s more like an older sister to the boys, playing with them.
It’s this sense of wonder and play that’s so important to the show. Maintaining this sense of play is crucial to being creative and happy, Gibbs says. “Over the course of the story, every single character comes to the realization that you never have to leave that childlike sense of wonder and that life is better when there’s play in it,” she says.
As J.M. Barrie wrote, “The moment you doubt whether you can fly, you cease for ever to be able to do it.”
Buy your ticket for Finding Neverland here!
Images courtesy of Finding Neverland.