Quietly, like shadows in the dark, they creep up on Arkansas men, slowly and without warning. Fearing the unknown, many men keep the proverbial lights off, covers pulled up hoping the shadows retreat into the night. Turn on the lights and confront these fears: heart disease, hypertension, prostate cancer, diabetes and suicide. When it comes to men’s health, all is not gloom and doom. The best offense is a good defense against these five silent killers.

Here’s a heart stopper: when it comes to cardiovascular disease (heart attack, congestive heart failure, stroke and blockages in the arteries preventing blood circulation), Arkansas is among the top five states in cardiovascular mortality.

“Cardiovascular disease, as a whole, is the leading cause of death in the U.S.,” says Andre Paixao, a cardiologist at Arkansas Heart Hospital in Little Rock. He says heart attacks are more common among men.

According to the Arkansas Department of Health (ADH), diseases of the heart were the number one killer of Arkansas men in 2017, responsible for 4,331 deaths, 25.9 percent of all male deaths. Nationally, heart disease is the number one cause of male deaths at 24.4 percent.

Risk factors for cardiovascular disease include: advancing age, elevated cholesterol levels, hypertension or high blood pressure, smoking and diabetes. Other health concerns such as obesity, inactivity and unhealthy diet will mainly affect individuals by leading to those risk factors and, later on, to heart disease.

“Blood pressure really is more of a risk factor for heart disease than a sign of it. You need to pay attention and control it to prevent heart disease down the line.” 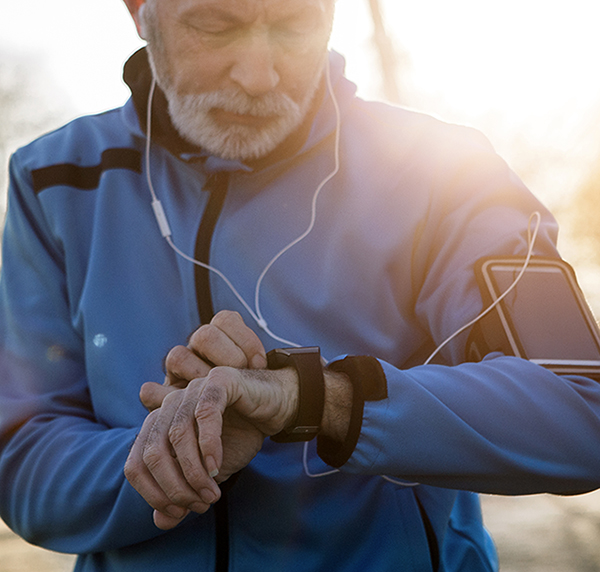 Paixao’s advice is for men to make lifestyle changes in their 30s and 40s to minimize risk of heart attack by more than 50 percent. That includes:

• A healthy diet with high consumption of olive oil, fruits, vegetables, whole grain products and limited red meat and dairy products; may include one glass of red wine daily.

• A healthy weight: men 30 percent overweight are more likely to develop heart disease even with no other risk factors. 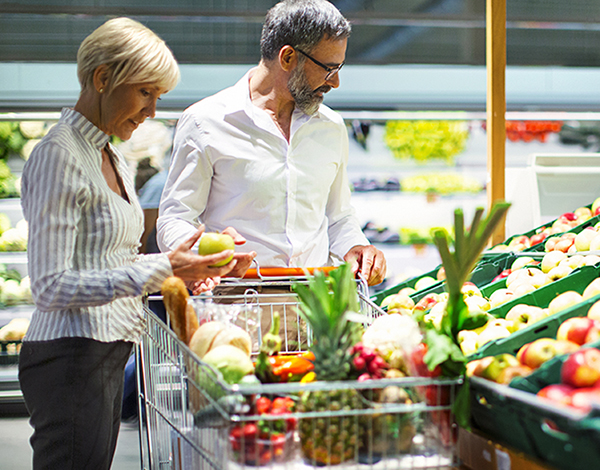 Closeup of a late 40’s couple doing some grocery shopping at a local supermarket. They are picking some fresh apples.

The second leading cause of cancer-related death of men in the state is prostate cancer. According to the Centers for Disease Control and Prevention, Arkansas reported 2,070 cases of prostate cancer in 2015. The American Cancer Society estimates that 2,680 Arkansas men will be diagnosed this year with 280 projected to succumb to the disease.

While the sudden jump in projected cases appears dramatic, there has been a reduction in diagnosis of cases over the last several years.

Robbie Hurtt, a urologist at Arkansas Urology in Conway, adds, “This has also resulted in stage migration, i.e., higher stages of cancer being present at diagnosis, which oftentimes is not curable.”

“Many men don’t worry and say they ‘feel fine.’ Most prostate cancer is completely asymptomatic until it becomes more aggressive and possibly to a state that’s not curable.

“Men may have some blood in their urine or semen, new onset of urinary symptoms such as weak stream, getting up a lot at night or painful urination,” Hurtt says. “Their primary doctor performs a rectal exam or PSA test, and that’s how this all starts.”

Fortunately, technology exists to catch cancer sooner with one caveat.

“The United States Preventative Task Force reversed its 2011 recommendation against PSA screening stating that it should be a decision between doctor and patient. Unfortunately, there are still patients not being screened. For men who have regular PSA screenings, we have the ability to use technology in our favor and follow these at-risk patients more closely. This results in earlier cancer detection, and those men tend to have less aggressive (curable) cancer because of that earlier detection,” Hurtt says.

Although the most common treatment is split equally between radiation and surgery, some patients don’t require treatment. Hurtt says many men have low risk disease that does not typically spread.

“Those patients are placed on active surveillance where we follow their blood levels closely, performing biopsies in the future. High risk cancers are the types that spread and kill, which are normally treated with minimally invasive laparoscopic surgery or radiation.”

Hurtt and Collier agree that screening and education are the best defense: 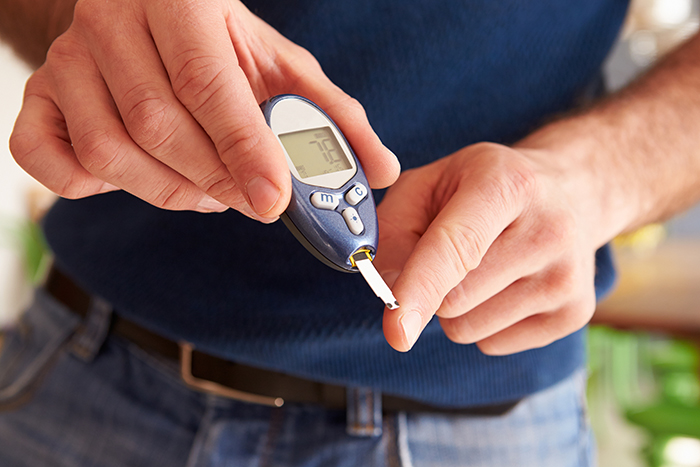 “Type 2 diabetes patients generally have obesity, hypertension and elevated cholesterol, and it just so happens that a lot of those are risk factors for coronary artery disease,” says Allen Redding, an endocrinologist at CHI St. Vincent Little Rock Diagnostic Clinic.

“If one parent has type 2 diabetes, there’s about a 40 percent chance the children will or, as a child, you will. If both parents have diabetes, the expectation is a 90 percent chance. So if you or someone you know is questioning the need for diabetes screening, look at the parents as a trigger.”

A screening test for diabetes is recommended for any adult with hypertension or elevated lipids. Once adults reach age 40 or if their body mass index (BMI) is greater than 25, Redding recommends the hemoglobin A1C test to measure average level of blood sugar levels. If A1C numbers are in the borderline diabetes or pre-diabetes zone (5.7 to 6.4), the test is repeated every one to two years.

Of the type 2 adult onset diabetics out there, Redding says 90 percent are either overweight or obese. His advice to men who have been newly diagnosed with type 2 diabetes may have a familiar ring to it: lifestyle changes including healthy diet, exercise and weight loss.

“I tell patients I’m responsible for giving them the tools to manage their diabetes, but the real person that manages their diabetes will be them.” 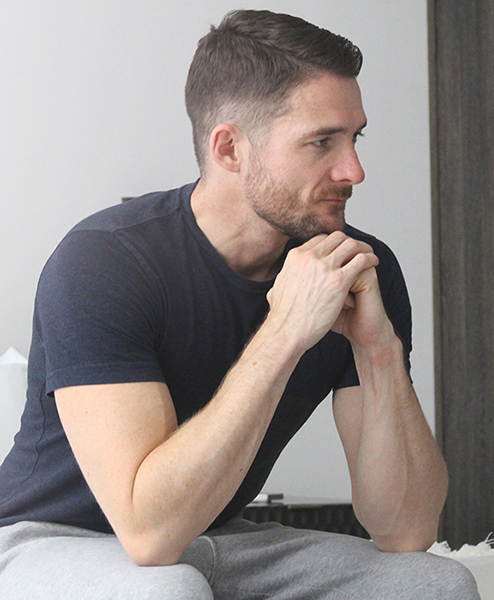 A handsome male deep in thought.

The seventh leading cause of male deaths has been, traditionally, hard to talk about.

“We miss opportunities to save people’s lives because we’re scared to talk about suicide,” explains Justin Sanders, director of clinical services and a licensed social worker at The BridgeWay in North Little Rock. “Have the conversation and ask, ‘Are you having thoughts of hurting yourself?’”

In Arkansas, suicide accounted for 478 deaths in 2017 or 2.9 percent of all male deaths, according to ADH figures. The American Foundation for Suicide Prevention reports the highest rate of suicide in the United States to be among middle-aged white men (69.67 percent of suicide deaths in 2017).

Mental health issues and “what surrounds” them factor in to predicting suicide, Sanders says.

“Isolation, lack of supportive community, feeling like you’re a burden on family or community. Middle age is a time of life when you’re settled in your career and family, yet there’s disappointment in pursuit of accomplishment. Sometimes there’s realization we’ve been working really hard on things that don’t bring us a lot of joy or we haven’t provided in a way we feel we should have.”

There are always some warning signs struggles with mental health, expressions of depression and substance abuse.

“If you are abusing, there’s a higher likelihood of attempting and completing suicide.” Sanders says.

If red flags are present, be direct and ask, “Are you having thoughts of committing suicide?” He cautions if the treatment and safety conversation is met with resistance, then “we should pay close attention.”

Access to firearms is a big factor in the suicide rate, Sanders says. In the face of resistance to treatment and safety conversation, “We need to say, ‘I’d like to have a conversation about getting a lock for our gun.’”

• If you see warning signs in friends or family, don’t be afraid to ask them about it; follow up and help them with good care.

• If you’re in the midst of feeling like you’re going to hurt yourself, call 911.