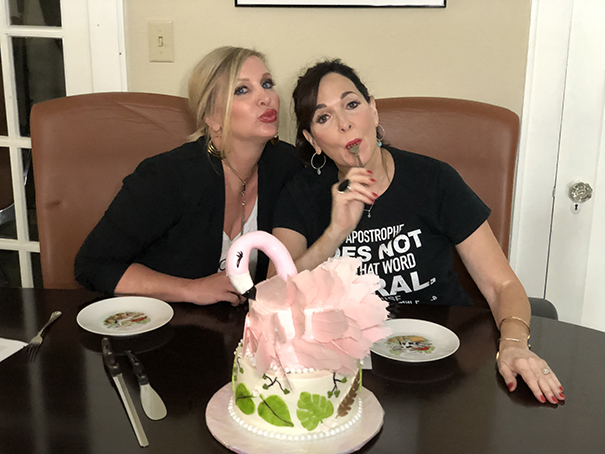 It’s coming down to the wire with the “Heather and Lisa Eat Cake Because It’s Heather’s Birthday” contest! Eight cakes have entered the AY office, and eight cakes have been defeated.

AY Publisher Heather Baker and her trusty gal Lisa Fischer, AY Editor-at-Large, have been tasting cakes from around Arkansas in preparation for Baker’s birthday on Sept. 24. It’s been a journey for both of them, and it’s coming to a close. But not before they finish off the last two cakes and crown a winner.

“Now her birthday is Tuesday, and by then, I don’t know what’s going to happen. We’ve eaten so much sugar,” Fischer says. “She wanted 10 cakes in 10 days. Let me pull the curtain back – she really wanted 20 cakes in 20 days. I talked her off the ledge, and we narrowed it down to 10.”

Before digging into the cake, Fischer gives the participating bakers a shout-out for their hard work and for people supporting the bakers.

The penultimate cake is coming all the way from Northwest Arkansas. Andrea Smith, a self-taught home baker, prepared an astounding flamingo cake for the pair. “Although I just started, and I’m still learning with every cake I make, I absolutely love creating things that look and taste amazing! I consider myself very lucky to have found something I love to do that can make other people happy,” Smith says.

“She drove in from Cave Springs by Rogers and stayed in a hotel a night because she taught we needed this beautiful cake,” Baker says.

This cake, shaped like a flamingo, is a two-tiered cake, andthe top tier is strawberry with cotton candy buttercream and the bottom is a French vanilla cake with a simple syrup made from fresh strawberries and a vanilla buttercream.

Not only is the cake visually stunning, but its taste leaves Baker and Fischer almost speechless.  “It’s delicious. I never knew I loved strawberry cake as much,” Baker says.

It’s so good that Fischer immediately crowns it as one of the top three cakes she’s had during the contest. She is particularly impressed by the visual style of the cake. “We haven’t had an ugly cake, I can tell you that, but this is spectacular,” Fischer says.

Baker agrees, ““Look at all the detail in the leaves. Look at the detail of the flower with the petals.”

That finishes off cake #9, and there’s only one more to go before the grand prize winner is revealed.