Fly Fishing is for Girls 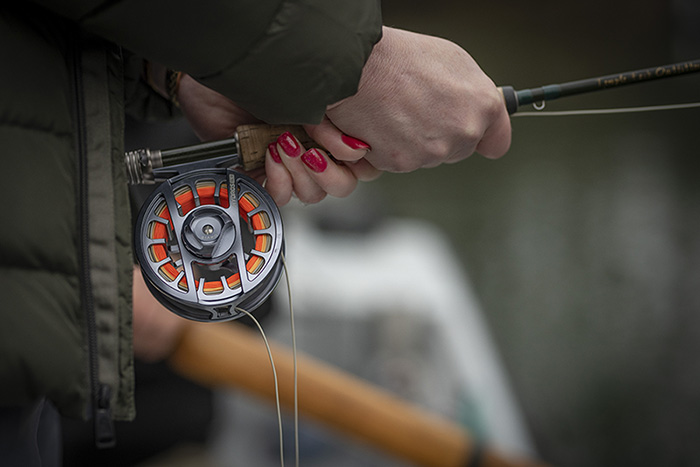 Henry David Thoreau once said, “Many people go fishing all of their lives without knowing that it is not fish they are after.” It’s the lure of the lure that brings people to the water. And Arkansas has plenty of natural resources to fulfill that hankering. I found myself in a boat on the Little Red River the first Saturday in February, and I’m glad I took the bait.

“Many people go fishing all of their lives without knowing that it is not fish they are after.”

According to the Arkansas Game & Fish Commission, the Little Red River is nearly 30 miles of “ideal trout habitat below Greers Ferry Dam at Heber Springs.” This river formed after the Corps of Engineers built the dam – the one that was dedicated and was the final appearance of President John F. Kennedy in November 1963. Its temperature is a constant 50 degrees, which keeps the air temperature cold in the winter months and cools off our hot Arkansas summers.

Travelers come from all over to test the pristine waters where brown, rainbow and cutthroat fish are plentiful. I was able to find out first-hand the magic of these waters during my very first (yes, you read that right) fishing expedition. Three other women and I took to the river, including AY Publisher Heather Baker, and we are hooked – pardon the pun. It was a chilly February day in the foot of the Ozark Mountains between Heber Springs and Pangburn where our two guides took us. A representative from AGFC joined us, and she, too, was relatively new to fly-fishing, which is what we are certain we mastered. We gals giggled when we realized that we didn’t have to wear waders and stand in the middle of the river like Brad Pitt did in the film A River Runs Through It.

The weather was mild for our trip; two of us had never been fishing, the other two grew up fishing. The river is kind to first-timers, which is why we were able to catch fish easily all morning. The limit is five. When we were told by our guide, Jamie Rouse of Rouse Fly Fishing (rouseflyfishing.com) that the world record for brown trout was caught on this very river in 1992 and then was beat out in 2009, we really thought we would walk away as “winner, winner, rainbow trout dinner.” Most of the ones we caught were approximately five to eight pounds, which is the average for the waters but AGFC says, “a 20 pounder isn’t out of the question.” The world record was – (I hope you’re sitting down) – a 40-pound fish.

As far as getting women on the river, just do it. Fly fishing, Rouse says, is the perfect sport for women. He and his wife are both guides, and he says that “women do great with fly fishing because it’s not a sport of strength but timing and rhythm. Women don’t have a lot of bad habits. It’s a clean slate where they pick up on it really fast. The cast itself is an art and quite addictive.”
Rouse, along with fellow guide Lowell Myers of Sore Lip ‘Em All Guide Service (sorelipemall.com), instructed us in the art of “10 and 2.” They both told us to bring the pole back to the 2 o’clock position in the air and cast it to the 10 o’clock position. It’s a dead stop. The line would cast in the water, and then we would wait. It was fun to watch the bobber submerge even a slight bit, and then we would “strip” our line by pulling in the slack.
We squealed with delight at every single one we caught! And the guides were so encouraging as we pulled the fish off the hook, and they got it ready for the next cast. A benefit of fly fishing is no live bait. But again, Rouse was the one who did those things. We were busy eating our snacks on the river. Yes, we brought snacks. We packed chicken salad sandwiches on croissants (nothing says “roughing it” on the Little Red River quite like French pastries), mixed nuts and Perrier. I mean, doesn’t everyone do this?

“Females are the fastest growing demographic in fly fishing. I think it could be the desire to ‘unplug’ from things found in everyday llife – phone/electronics, office stress, home challenges and to reconnect with themselves, nature or being with family one-on-one outdoors.”

This is the perfect girls’ trip. Guide Myers says, “Females are the fastest growing demographic in fly fishing.” He speculates, “I think it could be the desire to ‘unplug’ from things found in everyday life – phone/electronics, office stress, home challenges and to reconnect with themselves, nature or being with family one-on-one outdoors. And it’s a sport where male/female and young/old are equal in abilities.” So, rent a cabin along the river, eat where the locals eat and hire some guides. One guide even has access to a massage therapist because, after a day of fishing, some wine and a massage are the perfect way to unwind. But bring your own hooch. Cleburne County is still dry. 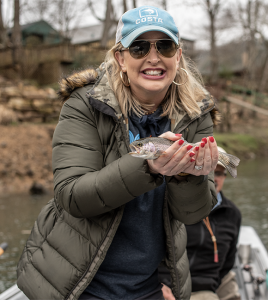 Know before you go: The Arkansas Game and Fish Commission has a bevy of resources for new anglers on their website (agfc.com). Maps, regulations, scientific reports and surveys are just a click away. You can also learn more about AGFC’s Master Angler Program, Arkansas Stream Team and fishing tournament programs. And be sure to check out the list of family and community fishing locations around the state, which also shows how recently the trout have been stocked.
And don’t forget to buy your fishing license, which you can also do from the AGFC website. That’s pretty important, too.

Curious what to do with that fresh caught brown or rainbow trout? Well, here’s a recipe provided by Chef Shane Henderson of Ben E. Keith Foods. He is an expert in the kitchen and on the water as he grew up eating fish caught on the White River. He says most people just don’t know how to filet these fish and cook it properly. 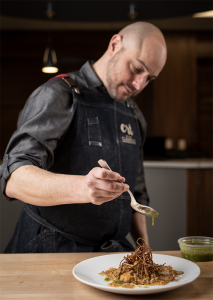 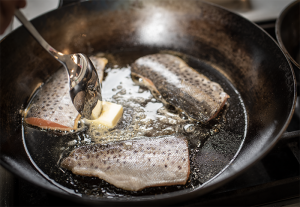 Once the fillets are browned evenly on the flesh side, about 2-3 minutes, flip over and continue to cook for another minute on the other side. Add the onions at this point to get them browning. Once the fillets feel about as firm as the palm of your hand, remove them to a plate covered with a paper towel to rest as you finish the rest of the dish. Add the chorizo and the tomatoes. Break up the chorizo with a spoon. Adjust heat to medium as it browns quickly. Once the chorizo is browned, add in the heavy cream and allow to reduce by about one fourth. Add in the parsley and allow to reduce to a thickness you like. Garnish with fried leeks if desired.