For the Fourth of July weekend’s Thirsty Thursday, AY About You was excited to cross the Arkansas River and visit with the hardworking staff over at Flyway Brewing in North Little Rock. Located in the heart of the Argenta Arts District, Flyway Brewing boasts its ten-barrel microbrewery that has been serving customers for five years now – even being featured on the Food Network’s Diners, Drive-Ins and Dives.

“We’ve operated on the goal of crafting great beer that is traditional in its style and, obviously, delicious,” Wren Scott, Flyways social media manager, told AY. “We really have a passion for the community here. We’re excited to be located in Argenta and be a part of what is now a thriving and continuously growing downtown area.”

It is evident that Flyway remains faithful to its mission to serve food you could find in the ‘backyard’ by looking at their menu. Scott noted that all of their dishes pull from resources they find in-state – highlighting their Blackened Gator nachos, a plate that layers blackened alligator meat on top of “individually build chips” and smothered in melted Monterey Jack cheese.

“We have a huge variety [in menu] that I think is pretty mind-blowing, and part of the reason we were featured on Diners, Drive-Ins and Dives,” Scott says. “We have everything from French fries paired with ketchup or cheese to Venison goat cheese sliders with a house-made blueberry reduction made with our blueberry wheat beer.”

And their beer menu matches in creativity and taste.

The brewery keeps 12 beers on draft at all times, rotating according to seasons. While there are some classics that stay year-round, such as the Honeybird Blond Ale and the Bluewing Berry Wheat, Flyway tries to maintain constant creativity, partly due to the fact they brew in house with “really, really brilliant” brewers behind the beer.

“We’re about to release our carrot cake ale,” Scott says. “It’s a family recipe of cake-inspired golden ale. It is brewed with a bunch of carrots and golden raisins and is part of our traditional cake series.”

Currently, Flyway has a red velvet ale on draft, one of their many cake series ales that are “brewed in the fashion of family member’s home recipes.” The carrot cake ale should be available by the end of the month. 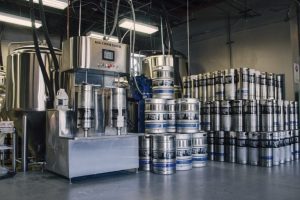 For now, Flyway’s dining and taproom remains closed due to COVID-19. However, they now offer ‘Tent City,’ a collection of tents in their north parking lot that allows the brewery to welcome customers back – especially for Fourth of July weekend. Flyway has also taken a giant leap by opening their new sister restaurant: Brood & Barley, also located in the Argenta neighborhood. Brood & Barley offers several tap beers not offered anywhere else, including Flyway, as well as a gourmet cocktail menu.