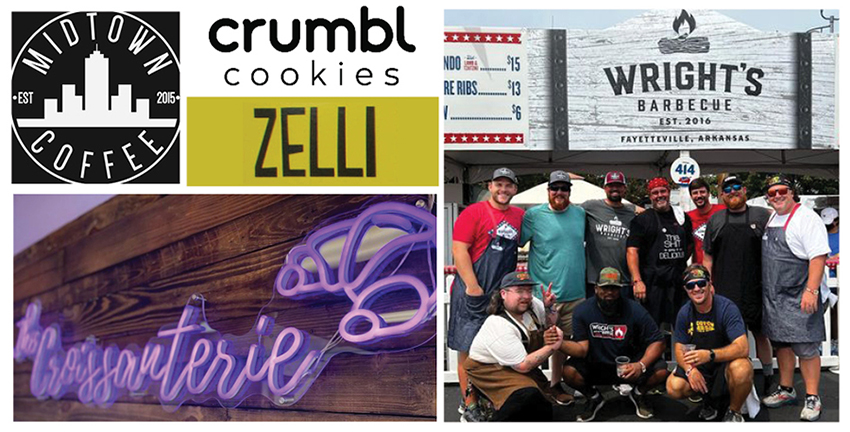 Midtown Coffee is planning a soft opening for its newest location in Atkins. Pending final installations, the Russellville-based coffee spot announced it will officially open its doors for its fourth location on Monday, Aug. 15. The Atkins location of Midtown Coffee is currently drive-thru only and will be open from 6:30 a.m. to 6:00 p.m.

Little Rock’s first and Central Arkansas’ third 7 Brew is slated to open this year at the former location of Shorty Small’s. In addition to this news, 7brew has also announced its new brand of energy drinks, 7 Energy. The energy drinks will replace red bull in drinks made at the drive-thru coffee shops.

Crumbl Cookies is opening its  West Little Rock Location this Thursday, Aug. 11. The cookie shop will be open during its normal hours of operation at 11525 Cantrell Rd., suite 304. For more information on the growth of the boutique cookie franchise in Arkansas, read this earlier article.

Cache Restaurant in Little Rock is temporarily closed, citing busted pipes underneath its dining room floor as the reason. For updates on when it will reopen, check its Facebook page.

The Croissanterie in West Little Rock has announced its plans to extend its hours of operation following Labor Day. Not only is the popular boutique breakfast spot hoping to bring its burgers indoors on the weekend for brunch, but it has also applied for a liquor license in order to have a full-scale brunch menu on both Saturdays and Sundays.

Downtown Springdale announced that Zelli Pasta, a family-owned and operated pasta producer, has opened on Emma Avenue. In addition to different types of pasta, Zelli has everything needed for a pasta night at home, available for purchase. For more information about Zelli, click here.

Maxine’s Live reopened its doors on Aug. 4 after being closed for repairs. The Hot Springs venue & eatery  is popular for its weekly events and shows and information regarding the schedule of these events can be found on its website.