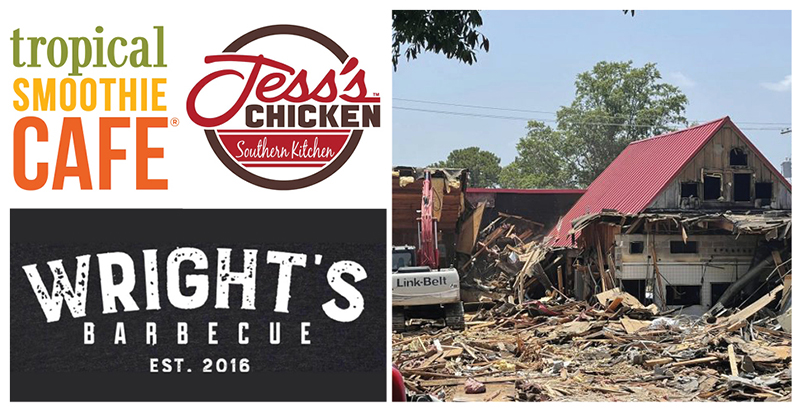 Barbecue fans will be excited to hear that Wrights BBQ, the well-acclaimed authentic handcrafted barbecue joint, is expanding its reach in Arkansas by adding its third location in Rogers. The new joint will be located at the former McClard’s at Pinnacle Hills.

Smoothie lovers, make your way to the new Tropical Smoothie location in West Little Rock this Friday, July 22,  for its grand opening. The restaurant will be located at The Ranch, right off Cantrell Road and franchise owners DYNE Hospitality are hosting the opening of their 91st store with a full schedule of giveaways, $1.99 happy hour smoothies and yoga classes.

Jess’s Chicken, the long-awaited second concept for David’s Burgers (brought to us by co-founder David Alan Bubbus and his wife, Jessica Bubbus, the company’s VP), is expected to open late Aug. at 10907 N. Rodney Parham Road in Little Rock, according to food blogger The Mighty Rib. The new restaurant concept will focus on fried chicken and savory & sweet chicken salad.

Rock City Taco & Margarita Bar, located at 415 E. Third St. in Little Rock, recently posted to its Facebook page that as of the end of May, the operation is “Temporarily relocated to online and deliveries only.”

Grill Pollo has officially opened its second location at 2006 N. Reynolds Rd. in Bryant. The eatery will serve a fusion-filled menu of both grilled Southern and Latin chicken. Grill Pollo will be open from 11 a.m. to 8 p.m. daily.

In honor of its fifth anniversary, Little Rock’s Petit & Keet will be celebrating its birthday July 20 – July 23 with a special five-course menu. To inquire about reservations, click here.

Hot Springs visitors and locals can rejoice because J&S Italian Villa officially opened its doors on July 14 at 4332 Central Ave., Suite B. In April of 2022, hospitality veteran Saddiq Mir purchased the restaurant with his wife. Click here to read about the new ownership.

Arkansas’ first sake brewery, Origami Sake, recently opened its doors to the public. Origami Sake, a project that has been in the works for years now, is located at 2360 E. Grand Ave in Hot Springs.

Longtime favorite Shorty Small’s has begun the process of being demolished. For 42 years, the Little Rock staple was located at the corner of Rodney Parham and Shackleford Rd., but in Feb. 2022, restaurant reps announced it would be moving locations. Read more about that here.

The McDonald’s location at 10201 Rodney Parham Rd. in Little Rock is also undergoing complete demolition. The L.R. Mourning Company has been contracted for this project, which will include the rebuilding of a new, modern McDonald’s at the exisiting site.

The Hive, a refined country-cooking eatery located in the 21c Museum Hotel in Bentonville, announced that Chef Matt McClure would be stepping down as Executive Chef. The news also included that Micah Klasky, Chef de Cuisine, would be serving as the Interim Executive Chef for the restaurant.

Ice Cream lovers, don’t miss out on the opportunity to experience the ninth-annual Yarnell’s Ice Cream Festival on July 30 in Bentonville. The festival starts  at 9 a.m. and will include free ice cream samples as well as Freezefest, an ice cream eating contest.

AY Magazine will be sponsoring this year’s Main Street Food Truck Festival. Don’t forget to cast your vote daily for your favorite Arkansas-based food truck. Voting is underway and will go through July 31.

READ ALSO: Chef McClure Steps Down from The Hive After Nearly a Decade