By Marla Cantrell | Photography by Meredith Mashburn
Elaine Bowlin loves to see the early morning sun climb over the Boston Mountains in the small town of Winslow, population 422. On mornings she’s not working at her restaurant, Grandma’s House Café, she can watch the world turn golden in that perfect light. But today, she missed it. A bigger than usual crowd was coming for breakfast, and Bowlin arrived while the sky was still the color of dark velvet.
When she and her two helpers in the kitchen had finished, the buffet was filled with white and chocolate gravy, ham, sausage, biscuits and pancakes. And when breakfast ended, the buffet was nearly empty, which feels the same as high praise to Bowlin, who understands the connection between food and love.
As she speaks, she often brushes back a loose curl from her forehead. Her salt-and-pepper hair hangs in ringlets when she doesn’t pull it back. Her uniform looks like something you’d see in a medical office: brown cotton scrubs nearly as strong as she is.
When the subject of love comes up, she says, “This may sound funny to you, but what my mama taught me was that the secret ingredient to good cooking was to do it with love.”
For years, her mother made Sunday dinner for Bowlin and her five siblings, until she grew too old to do so. She also once owned her own restaurant where Grandma’s House Café now stands. Back then, it was called the Blue Bird Café, and at that time, its location on Highway 71 was a big plus. The road was the main thoroughfare between Alma and Fayetteville, and the traffic was intense. On days when the Razorback football team played, for example, cars and trucks inched along, often bumper to bumper. And many of those fans stopped at the Blue Bird for a home-cooked meal before finishing their trek to the stadium. 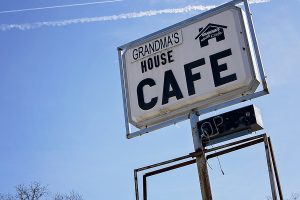 At Grandma’s House Café, diners can find the kind of homecooked meals they grew up eating.

The construction of I-540 (now I-49) in the late 1990s rerouted all that traffic, negatively affecting businesses along the old roadway. And then Bowlin’s mother began having health problems. The café closed in 2001 and remained empty until Bowlin and her husband Jerry bought and renamed it in 2005.
Bowlin, who’s been cooking since she was 10, believed there were people who missed the kind of meals she grew up eating, that there were people who would take a bite of fried okra, fried chicken or chocolate pie and remember what it was like to sit at the family table.
And that is exactly what happened, she says. But even those who didn’t grow up the way she did, those whose childhoods consisted mostly of pizza and burgers, for instance, still found comfort at Grandma’s House Café. Bowlin says it’s because good food is good food.
“For the last two weeks, we’ve had the same eight people eat every day we were open. They were from London, and they were in Winslow working on a movie. Anyway, on Sunday I do different desserts, and I make a turtle cheesecake that’s really good. One of the guys couldn’t wait until the next Sunday to come try it again.”
Meeting a customer whose home is in England felt like a surprise. And in Bowlin’s life, surprises are incredibly welcome. She laughs, and then begins the story of her three children. When her oldest son was 21 and her daughter 18, she found out she was pregnant. She was 42, her husband 47. And there they were, about to start this parenting thing all over again. Not long ago, her youngest son graduated from the University of Arkansas. 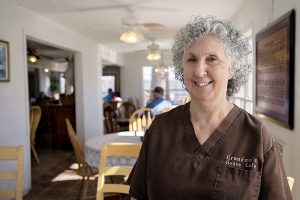 Elaine Bowlin, the owner of Grandma’s House Café, puts love in everything she cooks.

“I’ve been married 47 years,” Bowlin says. “I have a wonderful family. Five grandchildren. And I have this career that I love.”
Part of the joy she feels is in the continual response she gets from her customers.
“On Sundays, we usually have a line waiting on the porch when we open. People are really nice about waiting. We fill up fast, and we can seat 100.”
Many of the regulars show up for the pies. An entire table is devoted to them, and today they are lined up in a row: chocolate cream, peanut butter cream, apple pie, coconut cream, cherry cream. Nearby on the heated table is peach cobbler, the crust latticed, steam rising.
She suspects an equal number show up for the fried chicken, an entrée she’s a tiny bit famous for.
“I have four big electric skillets that I use,” Bowlin says. “I season the chicken and dip it in milk and egg. I fry it at about 400 degrees, and I only turn it once. That’s the key. Deep fryers don’t get the chicken tender enough.”
Bowlin is a bit of a perfectionist in the kitchen. The flaky crusts of her pies testify to that fact. Her yeast rolls do too; the smell of them is like the breath of heaven. What she does seems like magic, or at very least, artistry.
She doesn’t see it that way.
“I’ve been in the kitchen most of my life,” Bowlin says. “It comes pretty naturally.”
Still, her cooking skills seem like some kind of gift.
“I had a man ask to see me one day. When I came out of the kitchen, he said, ‘Thank you for your cooking. I can tell you put love into it.’”
For Bowlin, there couldn’t be a better compliment.
“Here we are in the boonies, and people come from miles around: Tulsa, Texas. It is kind of amazing.”
She is now at an age when she could consider retiring. For her, that thought is as far as the east is from the west. The restaurant is open from Thursday through Sunday, and that gives her three days to decompress, doing all the other things that interest her.
More often than not, it’s spending time with her family. Or simply making a meal for her husband of nearly fifty years, which takes a little calculating, especially for a woman whose recipes typically feed at least a hundred people.
Grandma’s House Café
21588 S Highway 71 Winslow, Arkansas
479-634-2128
Hours:
Thursday, Friday, Saturday: 8:00 a.m. – 2:30 p.m.
Sunday: 11:00 a.m. – 3.00 p.m.