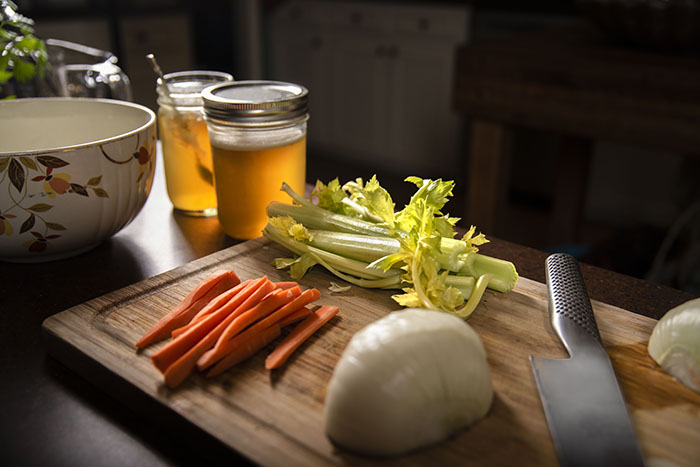 There are a few guidelines.

Just cover the bones with water. If you add several inches of water above the bones, your broth will never gel. The gel is simply evidence of gelatin, which is exceedingly good for your joints, aches, hair, skin and nails; but most importantly, your gut. Broth that does not gel is still good because it still has essential minerals in it.

If you are making broth to drink, as some are prone to do for gut healing protocols, it tastes best if you cook the bones with an onion, some garlic, a couple stalks of celery, plus a few carrots and a bay leaf. Be sure to add plenty of sea salt before drinking.

However, if you’re making broth for soups that will be flavored by other things, simply boil the bones in water.

Cook on low for a minimum of 6 hours. Eight hours is better and up to 24 hours. I don’t prefer the smell of chicken broth first thing in the morning, so I plug it up outside. It is hot enough that animals won’t bother it.

Bring to simmer and cover with a lid to keep water from excessively evaporating. If you find the water is evaporating too quickly, simply add more. Clearer (prettier) broth results from a slow simmer. Simmer as long as you’re in the kitchen, at least a couple hours and up to 8 to 10. I’ve gone to bed just after turning off the broth, let it cool all night, and strained it in the morning.

Straining: Once you’ve cooked the bones for the desired amount of time, strain bones and veggies away from the broth so that you’re only left with golden liquid.

Allow broth to cool to the touch before pouring into plastic. Freeze in former yogurt containers or quart zip top bags. If the broth is hot and I’m ready to be finished, I pour into glass jars then refrigerate.

Most frequently, I use broth in soups — I aim for soup to be the main player at dinner once a week. Chicken soup can be made super fast if you’ve already thawed broth and are using a rotisserie chicken. Just sautè onions, carrots and celery, throw in the rotisserie meat and add broth. Voilà! Dinner in minutes.

My husband often sips broth in the morning as a way to wake his digestive system. When we are sick, broth is an effective elixir — and tastes especially delicious with a half a lemon squeezed in it.

We use broth for making rice or lentils.

Sometimes when reheating food on the stovetop, I need a splash of liquid and will use broth — like when  transforming roast beef into a delicious barbacoa (taco meat).

If I have an excess amount of broth, I will boil pasta or ramen in it.