Former Razorback Dre Greenlaw Gears Up for the Super Bowl 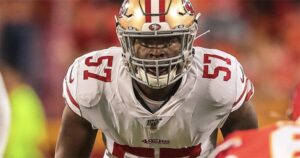 Dre Greenlaw was a good story before he turned in a phenomenal rookie year for the Super Bowl-bound San Francisco 49ers. Some Arkansas fans might be familiar with him.

The former Hogs linebacker entered foster care when he was eight years old. He was living in a group home in Fayetteville when former Fayetteville High School assistant coach Brian Early took an interest in him. The Early family mentored the 14-year-old Greenlaw, and finally took him in after the group home was about to close.

Early and his wife Nanci welcomed Greenlaw along with their young daughters Camryn and Aivery. Early took an assistant coaching job at Arkansas State in 2013 and moved to the University of Houston last year.

Early tried to get Greenlaw to sign at Arkansas State but after an impressive run at FHS, he had several Power 5 offers. He had always dreamed of playing at Arkansas. Just before his senior season at Arkansas, Greenlaw received the news he was officially adopted.

“Even though it wasn’t legal until July, he’s always been my son,” Brian Early told the Northwest Arkansas Democrat Gazette. “He’s felt the same way. We’re mom and dad to him.” 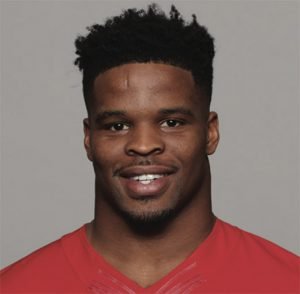 Greenlaw went on to play 38 games for the Hogs. He was an All-SEC Freshman Team honoree in 2015 racking up 95 tackles. A broken foot caused him to miss six games his sophomore season. As a junior, he totaled 103 tackles. The injury bug bit again in 2018, but he played nine games and racked up 80 tackles and 6.5 for loss with two sacks and two interceptions.

The injuries probably dampened his NFL future a bit. However, the 49ers picked drafted him with the 10th pick of the fifth round of the 2019 draft. They ended up with a steal. It didn’t take long for Greenlaw to wow the 49ers defensive coaching staff, and he spent most of the season as a starter on one of the vaunted units in the league.

Greenlaw finished the regular season with 92 tackles and an interception which came against Seattle Seahawks star Russell Wilson.

His biggest play of the season came in the regular-season finale against the Seahawks on national television. Greenlaw recorded a game-high 13 tackles and stopped Seattle tight end Jacob Hollister, the brother of former Hogs wide receiver Cody Hollister, at the one-yard line on the final play of the game.

It was a thrilling end to a standout regular season for Greenlaw, who earned a spot on the Pro Football Writers’ Association All-Rookie Team.

In Arkansas, I don’t think Greenlaw’s story was appreciated enough since Arkansas football was at a low point when he played. Not only is Greenlaw’s adoption story remarkable, but he also prevented a high school classmate from being date raped at a UA campus party. A kid who had no real upbringing until he was a teenager, who by all accounts was mature beyond his years while raising himself. And he just happened to be one of the better defensive players to come through Fayetteville High School and made an immediate impact in the SEC and NFL.

That’s an incredible underdog story plucked from a Hollywood script.

Hopefully, when he returns to Arkansas he will get his due. For now, the Super Bowl media will help make him a household name well before he takes the field against star quarterback Patrick Mahomes and the high-octane Kansas City Chiefs offense.