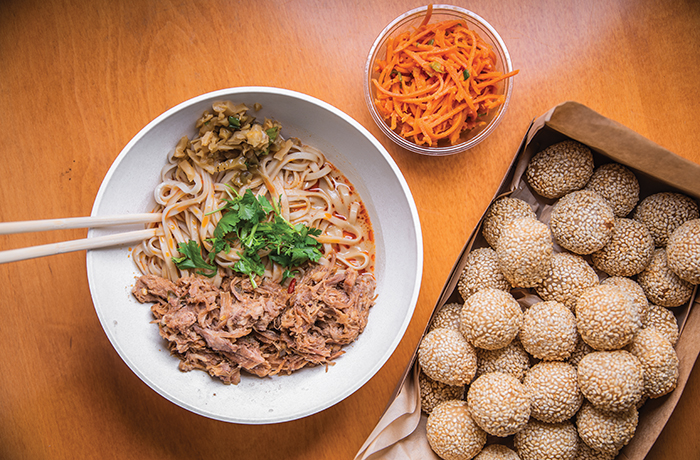 By Dwain Hebda // Photos by Jamison Mosley and Ian Lyle

Lisa Zhang is a Little Rock restaurateur willing to put her money where your mouth is. Seven years ago, with no prior experience in food service, she opened Three Fold Noodles + Dumpling Co. on her savings and the firm belief that Arkansans were missing out on something special: authentic Asian cuisine.

“When I immigrated here, I always saw there is a part missing, not only in Little Rock but in general, how the Chinese cuisine has been altered too much in a way to please American taste buds,” she says. “It lost the authentic goodness of authentic cooking. However, Chinese cuisine is a really big range. There is what I call unlimited variety or flavor. It’s much, much more than current American society has it from the to-go or buffet.

Ever since humanity first began to travel over long distances, they’ve brought their food traditions with them. Invariably, this caused ethnic cuisine to change with the address. Imagine immigrating from coastal Japan or Vietnam to say, Kansas, and the effect it would have on your Nana’s traditional dishes.

Economics has also played a major role in the evolution and sometimes outright fabrication of cultural dishes, in the name of suiting local tastes. Ask any restaurateur, and he or she will readily tell you one of the primary rules for surviving in such a cutthroat business is to give people what they want. When what you’re cooking is new or unfamiliar, this can be a problem. In a community with a healthy percentage of your fellow expats, you might survive sticking to the traditional recipe. In the hinterland, you have to evolve or perish.

All of this change — evolutionary and market-driven — has been the way of the world for centuries. But today, where the internet has made the planet much smaller and people can get around the world in an hours-long flight versus a years-long ship voyage, people have begun to reconnect to cultural origin stories, both their own and others, as often as not spelled out on the dinner table. 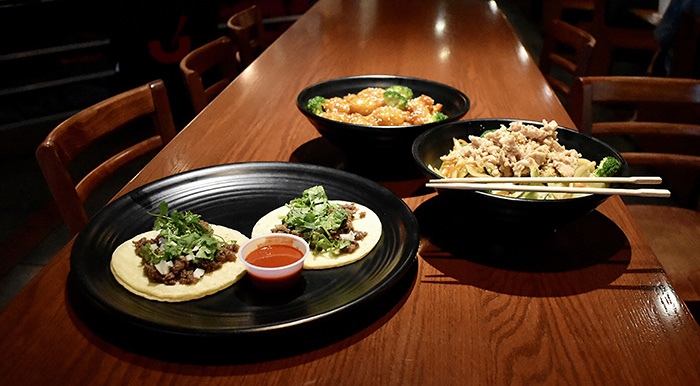 “There’s a big Korean community in Little Rock and Jacksonville; there’s a lot of churches and a Korean community in Arkansas,” says Jenny Lee, who with her husband, David, own Bulgogi Korean BBQ in Conway. “We didn’t expect who our clientele would be.

“To our surprise, it’s been more Americanized people. There are quite a few that know about Korean cuisine, especially those that were in the military and stationed in Korea. We’ve seen a variety of people here, even people who lived out of state or people who have been stationed overseas. It’s been a great blessing to see it.”

For the casual partaker of Asian food, much has been lost in cultural translation over the years. You might be surprised to learn how many of the best-known and best-loved dishes in America would be unrecognized in their supposed homeland. Not all are complete counterfeits, mind you, but those that aren’t have strayed so far from their source material they might as well be. 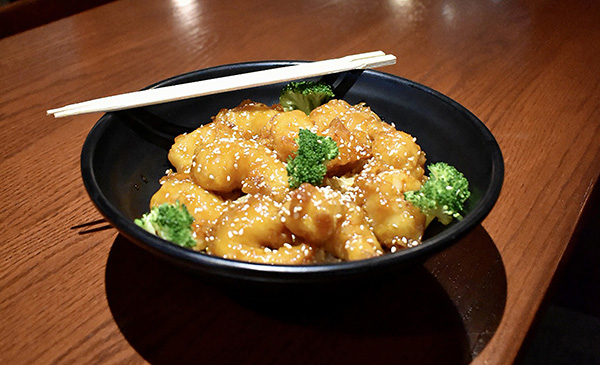 Both Bulgogi and Three Fold offer their own unique takes on Asian favorites.

Love orange chicken? You should, it was invented in the late 1980s with American taste buds in mind and promulgated to the mainstream by Panda Express and later P.F. Chang’s, says the website First We Feast. Perhaps a plate of authentic beef with broccoli is more your speed, which is fine, it’s just not Chinese. Western broccoli doesn’t grow in China, and the population there eats very little beef anyway, per Business Insider.

Other staples on many a Chinese restaurant menu in the States tell the same tale: Either they have evolved beyond any reasonable semblance of their inspiration (chow mein, for instance, or sweet and sour pork) or their heritage is completely American (crab rangoon, egg rolls and chop suey to name a few). 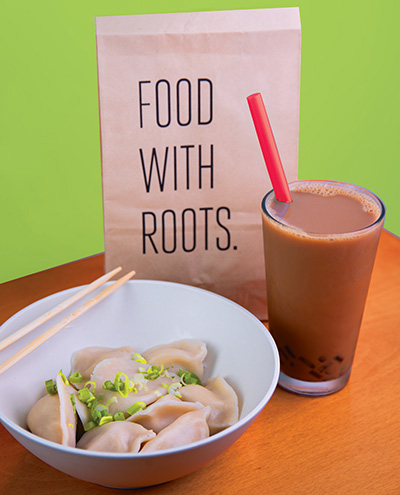 There’s nothing wrong with any of this, of course, as even Zhang is quick to point out. But in the process, the public is missing out on the bigger picture and broader world of Asian dishes in their original, unfiltered form. That includes within the Asian community itself where, as with any ethnic group, culinary traditions can dilute or disappear altogether over time as succeeding generations get farther from their immigrant roots.

“Don’t get me wrong, [Asian-American chefs] are amazing to do that alteration,” Zhang says. “For a hundred years, that’s been their wisdom. We’re just trying to do something more traditional, more authentic, and give local people an opportunity to experience it. We are very lucky this concept has been accepted and received very well here.”

In fact, simply calling a category of food “Asian” does very little to properly educate people on the breadth and depth of the cooking genre. For example, to the untrained eye and palate, all Chinese food may seem identical when in fact there are striking regional differences in flavor, ingredients and cooking techniques of the real thing. Imagine Arkansans wandering downtown Hoboken in search of real Southern sweet tea or fried chicken, bless their hearts, and you get the picture.

“Traditional Chinese cooking is really unlimited,” Zhang says. “It’s pretty much different from region to region and more focused on cooking technique, like French cooking. It can be very fine cooking; it can be very spicy cooking or very light and fresh with more priority on vegetarian using tofu and whey protein.” 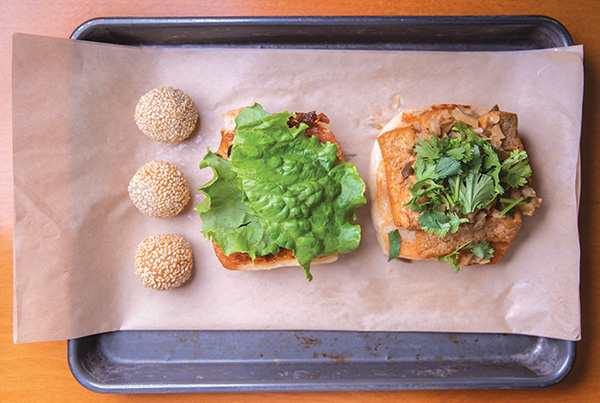 And that’s just China; move throughout Asia, and the story repeats itself in Vietnam, Korea, Thailand, Japan, the Philippines and Indonesia, to name a few. That’s both the joy and the challenge for restaurateurs such as the Lees.

“When we were thinking about a restaurant, it was ongoing for two years with different ideas,” Jenny says. “We knew there was no Korean restaurant except for one in Little Rock, but we wanted to bring one to Conway and the surrounding areas. We wanted to make it where it was the traditional Korean spices and sauces but putting our twist to it. We were thinking of different ideas where it didn’t scare off people.”

The couple has enjoyed being creative in the ways they blend the traditional ingredients and cooking techniques of their heritage and combining them with the very familiar. “Bulgogi” may sound completely foreign at first, but when they explain it’s marinated and thinly sliced ribeye, they have people’s attention. Use it in a Philly cheesesteak or serve with waffles, and they’re building bridges that can lead the diner to explore other, more adventurous grounds.

“The enjoyment of working together as a family and seeing and showing the public new cuisine is what I like about this business,” Jenny says. “Having people try new things and seeing their faces when they enjoy it, especially when they don’t know about Korean food or never tried it so they’re scared, is really great.

“Twenty years ago, when you said ‘sushi’ people didn’t know what it was. Now, at least people know what sushi means, whether they like it or not. That’s what we’re trying to do for Korean food. If they hear bulgogi 20 years from now, at least they’ll know what that is.” 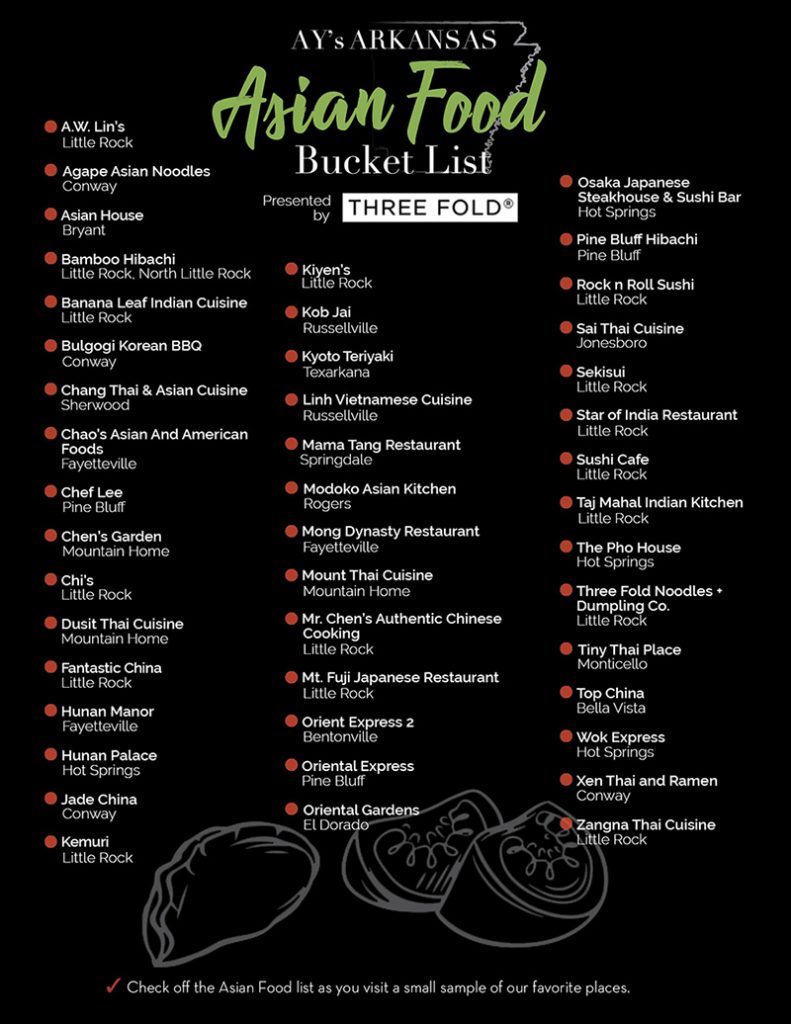