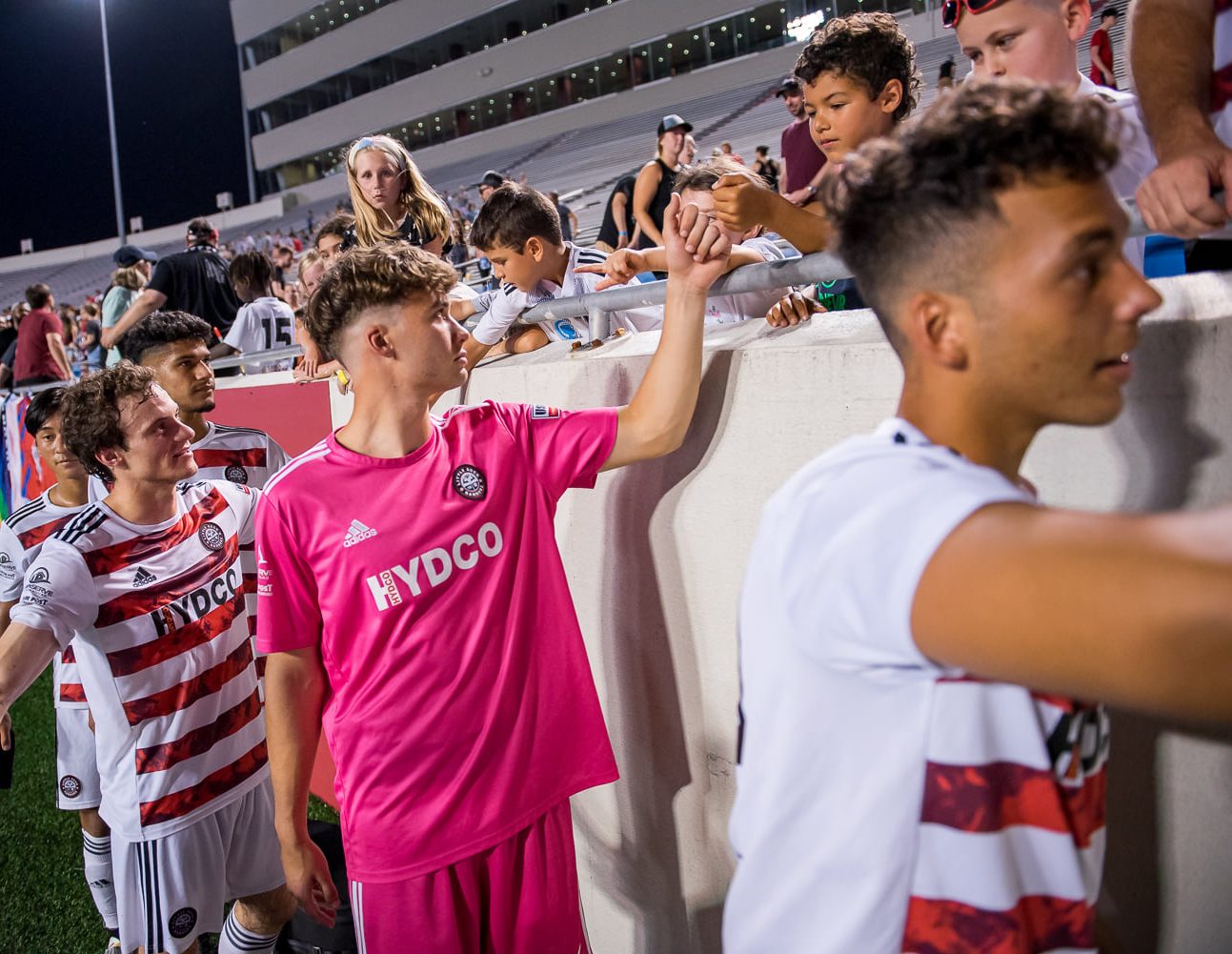 For decades the Central Arkansas sporting community has had no place to call home for soccer lovers. However, in 2015 a rising group of soccer fanatics emerged within Little Rock, finally giving a place to let their love of the sport thrive. However, more than just soccer love has emerged among the group. Local businesses, charities and relationships have benefited from the growing community of supporters as well.

It all began when a group of friends discovered their common love for an English Premier League soccer team, Arsenal.

In 2015, one member of the group, Kevin Paletskih, dreamed of a better place to cultivate passion for the sport, and surely, he found it at the dinner table.

“I found myself at dinner supporting a friend,” Paletskih says. “I got to chat with all the people and found that the majority of them like soccer and support Arsenal. That gave me an idea: Why don’t we do meet-ups to watch games together? That opened a door for good times once a week where I can talk soccer, yell and have fun with people of all walks of life who shared one thing in common.”

But for him, it was more than a spur-of-the-moment idea.

“I really enjoy soccer and it is always better in a group of friends, whether you watch it or play it,” he says. “At the time of starting a local support group, there was not a single professional or semi-professional team in Little Rock, in 2015. The sense of the soccer community was only present during games at Burns Park. I wanted for it to be beyond that.”

However, in the following year, the Little Rock Rangers made their appearance in the area, giving way for the Central Arkansas community to take part in more soccer-related festivities and events, rather than merely watching on TV. The semi-professional team has also accumulated a strong following, with supporter groups similar to the one Kevin helped form.

Since the group of Arsenal supporters burst onto the scene, more fan groups supporting other teams have sprung up in the area, spreading the fanaticism even further.

Despite supporting different teams, the groups often meet up together at local restaurants to watch matches — whether it be rivalry matches or supporting the United States men’s and women’s national teams, sharing their love for the sport. Furthermore, plenty of people among the groups join in supporting their home team, the Rangers, at home games held at War Memorial Stadium.

Rivalry seems to be thrown out the window, aside from friendly banter when coming together to support the Rangers. Paletskih says that shortly after forming the group, the others started to form, and even if they are rivals, he sees it as a good thing.

But more than the community for others, Paletskih says it has impacted him personally as well.

“It provided a lot of things for me,” he says about the soccer community. “I had a lot of fun meeting up for games, introducing new people to the sport and my favorite team, and making friends.”

More than just growing community, small businesses in the area have prospered from the support of soccer fans, and furthermore, have enjoyed them just as much. Plenty of local restaurants, like Hill Station and Fassler Hall, host watch parties for the soccer groups. Some spots have even purchased streaming service subscriptions to provide every soccer match for fans.

Aside from restaurants for supporters to have a drink and watch a game, a soccer store has opened for people to get onto the field and enjoy the sport for themselves.

“We noticed that a lot of more local businesses were interested in supporting soccer culture in Little Rock, such as sponsoring events and teams,” Paletskih says. “Since the community grew, we got our first official soccer store. Overall, it impacted local business in a positive way.”

Beyond local businesses succeeding from their business are charities in the area.

In 2019, Paletskih decided to gather with a few fellow fans and organize a soccer-oriented event that supports Arkansas Children’s Hospital. The event would consist of soccer players playing against each other in a bracket-style tournament, with prizes for the winners. The entry fees went to fund the hospital and further donations were accepted at the event. Local businesses also sponsored the event, giving free merchandise to those who took part in the tournament. (More information about how to be involved can be found at keeperwarsarkansas.org.)

Alongside Paletskih in organizing the event was fellow soccer fanatic, Mason Shuffield, who has created a widespread group on Facebook for kindred spirits who enjoy the sport, providing opportunities to meet fellow soccer fanatics, have discussions and meet up to watch games with one another.

The Facebook group gives fans an open platform to express their emotions, thoughts and ideas on the sport while also providing an opportunity to meet others and take part in events. Since forming the group, Shuffield says the soccer community is more welcomed in the area and confident than ever.

Pursuing the growth of soccer in Central Arkansas, Shuffield is adamant about developing the sport beyond the televisions and onto the fields.

“Any time I see a kid interested, I do everything I can in small moments to encourage their love for the game, which are definitely things that I never experienced growing up,” Shuffield says, sharing how he likes to influence the sport into other people. “I helped to start my high school team, and soccer was definitely a ‘weird’ sport at that time. That was just a decade ago. The culture is changing, and the ideas of the game are definitely being more encouraged than ever before.”

Sports in Arkansas have always predominantly been focused on football, basketball and baseball. As for changing the sporting culture in Central Arkansas, Shuffield says, “I think it’s just one more step taken that pushes soccer so strongly. We now have two local teams to watch (the Little Rock Rangers and Arkansas Wolves). There’s a new soccer park being constructed. New youth programs are continuously popping up. Plus, for adults, we have Arkansas Central Soccer Association, the Otter Creek League, Arkansas Indoor Soccer and, newly, Arkansas Adult Soccer.”

Although the growth of the soccer community appears to be successful in Central Arkansas, it seems as if Mason wants to see it extend beyond the area, as he says he wants to branch out into Northwest Arkansas.

For Shuffield and Paletskih, the sport has been more than just fun and business. It has given them friendships, which they have seen for several others, and that is just the goal for them.

“I’ve enjoyed having a platform to connect with my friends about Premier League, be it graphs, info, trade rumors, banter, memes, meet-up plans, and everything in-between all of that,” Shuffield says. “I’ve loved meeting several new [friends] through the group as well. I’d say my favorite part is meeting others who are also supporters of smaller clubs that I personally get to connect with since I also support a small club. We seem to support each other’s clubs in solidarity, giving us our own hodgepodge supporters group like our friends in the big clubs have.”

“I hope to see more people joining the supporter’s groups in Little Rock, learn about the game, and get outdoors to play it,” Paletskih says, sharing his vision for the future of the soccer community in Central Arkansas. “The whole idea is to build and expand the soccer community in Little Rock to give people a place where they belong and feel welcomed. To get more people involved and give them a sense of community, a place where everyone knows their name and is happy to see them. … The goal of this supporter group is to unite people from different backgrounds, ethnic groups, walks of life to get together and enjoy the time. It is also to bring a sense of community to some people who may not fit in anywhere else.”

More information on events, how to become involved can be found on the “Premier League Central Arkansas” Facebook group.