From Good Trouble to Good Food 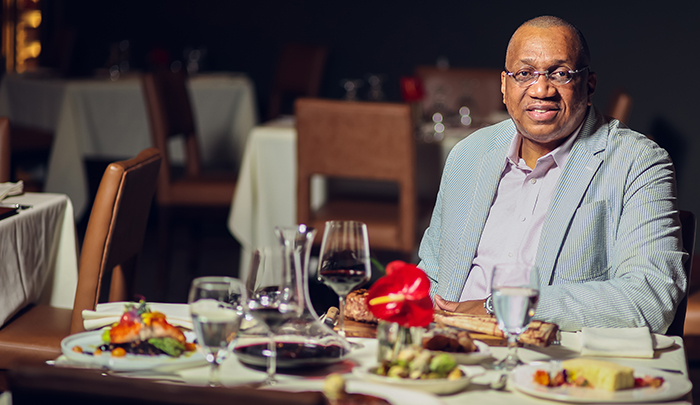 In his early 20s, Michael McCray thought his career trajectory was looking great. After studying business and economics in college, the Pine Bluff native had quickly gone to work in the White House.

But his quick ascent — and his life — collapsed after he became a federal whistleblower. The story of how he rebuilt his life over the next quarter-century, invigorated an isolated community of people like him, founded an award-winning Washington, D.C., film festival and found himself working for the 2022 James Beard Awards is an unlikely, but powerful one.

McCray graduated from Pine Bluff High School in 1986 and enrolled in his parents’ alma mater, Florida A&M University. In high school he’d been a scholar-athlete, playing basketball in two of the first three King Cotton Classic national tournaments. Pine Bluff in the early ’90s was two years running ranked as the worst place to live in America, but he loved and believed in the place.

He’d grown up in a middle-class household of intellectuals; his parents, Jacquelyn and Parnell McCray, were professors at the University of Arkansas at Pine Bluff. Jacquelyn was dean of the agriculture department (coincidentally, her sister was at the same time dean of agriculture at a Texas university), and had implemented the nutrition and regulatory science programs during her tenure at UAPB. Parnell, who McCray describes as a highly religious, morally upright person, taught statistics and computer science. 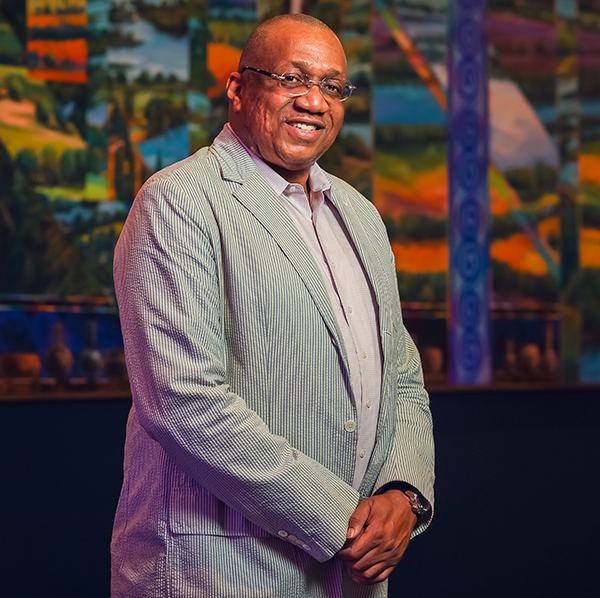 “I’d planned to go into finance,” McCray likes to tell people, “but a funny thing happened on my way to Wall Street. My governor was elected president.”

The promising young man was hired to work in the White House on economic development for President Bill Clinton’s designated Empowerment Zones and Enterprise Communities, a $2 billion investment that McCray says was at the time the largest since Lyndon B. Johnson’s Great Society programs. McCray’s job was administering for the Department of Agriculture the federal economic improvement grants to nonprofits in Arkansas, Mississippi and Tennessee, and he served on Al Gore’s technology team that helped promote the growth of the internet in daily and commercial life. At night, he attended Georgetown Law School. It was an exciting time.

He was in his dream job, working in the White House on economic development programs to help struggling communities like his hometown. But he had no idea how quickly or viciously that dream could turn on him.

“We think of whistleblowing as a voluntary action, and it’s really not,” McCray says in a Little Rock coffee shop 28 years later. “Nobody wakes up one morning and plans to become a whistleblower. You’re a person who sees something wrong, and you try to fix it. What happens next depends on management’s response.”

When McCray came across $40 million of fraud and abuse in the USDA, he raised a red flag.

“My thought process was, ‘Was it a good idea to give $40 million to a nonprofit that barely had bank accounts?’ I thought that seemed bad,” McCray says with a wry laugh. “I thought, ‘This could be a problem, right?’

“And that’s really all it took. Suddenly, lo and behold, I was a federal whistleblower.”

He says most whistleblowers’ cases are unsuccessful and get buried, the charges covered up; their win rate is only about 2 percent. McCray, who had pressed the fraud and abuse issue after being advised to drop it, was no exception. He spent five frustrating years in an unsuccessful legal battle with the government.

McCray lost his White House job, his home, his investments, even his fiance. Blackballed from working in the government, McCray’s references were severed, his career plans destroyed. He’d finished his law degree, but his whistleblower case delayed him from taking the New York Bar exam by five years. He passed the bar on his first try — the same year he also earned a CPA — but says because of the blackballing, he wasn’t admitted to practice for another two years.

He returned home, devastated and embarrassed by his “failure” in Washington.

“I was in a deep, dark place, rock bottom, trying to make sense of it all,” McCray says, pausing. “But rock bottom became the firm foundation on which I rebuilt my life.”

Eventually, McCray was able to make a living lawyering in solo practice and consulting with clients across the U.S. on economic development and marketing. He worked on political organizing for campaigns and served on the ACORN national board. But he credits two specific things with turning his life around.

“My father gave me a copy of Rick Warren’s A Purpose-Driven Life. And in 2007, I attended a conference of whistleblowers in Washington, D.C.” 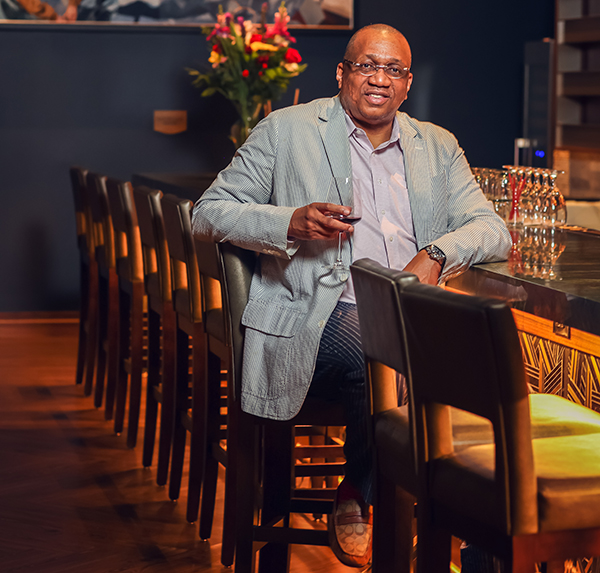 The book provided the context and meaningful framework for finding his purpose. And the 2007 Whistleblowers’ Week in Washington, the first of its kind held in decades, provided that purpose by connecting him to a community he hadn’t known how much he needed. And he wasn’t alone in that need; he says whistleblowers are 10 percent more likely to die by suicide. Because, he says, “It’s the isolation that kills, and the loss of your identity.”

McCray decided to put his energy into the conference, building a real organization of whistleblowers.

The term “whistleblower” was coined during Watergate, and the Whistleblower Protection Act was first passed in 1978, but McCray says the action is protected by one of the nation’s earliest laws. July 30, 1778, is the day the first whistleblower law was passed by the Continental Congress. “I’m going to misquote the law,” McCray says, “But essentially it says it’s the duty of every American citizen to report to Congress wrongdoing by the federal government at the first available chance.”

“It’s an exercise of free speech, and it’s an important civil and human right. Regardless of whether what you’re reporting directly or indirectly affects you or society as a whole,” he explains.

With the aid of Marcel Reid, another whistleblower he’d met on the ACORN board, he expanded the conference to the Whistleblowers’ Summit. Participants would work on Capitol Hill all day talking to lawmakers, then congregate for movie nights, watching films like Erin Brockovich and All the President’s Men. They invited the public to watch the movies, and interest in the summit grew each year. Eventually, it attracted documentarians who wanted to screen their films at the annual Whistleblowers’ Summit. The organization began to curate documentaries and elevate films the D.C.-area public might not know about.

“A lot of people hate whistleblowers, but it turns out they love whistleblower movies,” McCray says. “As we leaned into it, we decided to rebrand, formally adding ‘film festival’ to the summit.”

It’s been popular, and the summit and festival have continued to grow in reputation and influence, holding mini-conferences in cities around the country, Little Rock included.

“We’ve been able to lift up whistleblowing, so it wasn’t just whistleblowers talking to ourselves,” he says, calling it a forum to connect Washington policymakers, filmmakers, journalists, authors, whistleblowers and the public to each other.

In 2008, the OMNI Center for Peace, Justice and Ecology in Fayetteville honored McCray as a Justice Hero in recognition of his leadership in Washington, D.C. Then, last year, the Association of Certified Fraud Examiners named him the recipient of the Cliff Robertson Sentinel Award, named for the actor who blew the whistle on a Hollywood studio’s check-forging scandal.

“The inscription on the award reads, ‘For choosing truth over self,’” McCray says. “I’m proud of that.”

Then the film festival was honored in 2019 by Fest Forums, a conference for the entire festival industry, with a Best of the Fest award. McCray says the Fest Forums event has three categories: Arts, Film and Culture, Food and Beverage, and Music, with organizers mingling from the different types of festivals. Among the people he got to know were organizers from the James Beard Foundation, which presents some of the highest honors in the nation’s culinary industry.

Impressed with McCray’s story, the James Beard people interviewed him for a seat on the awards’ newly formed Ethics Committee. He explains, “Because you can look at whistleblowing as free speech, but it’s also business ethics and corporate integrity.”

In December, McCray became vice-chair of the Ethics Committee in its first year as part of the awards. The committee oversees complaints it receives about nominees and makes recommendations to judges. He says much of those so far have been about poor management, wage theft and similar issues he says are not necessarily “on the plate, but in the back office.” He’s thrilled to attend what’s certain to be one of the best-tasting weeks of his life at the awards in Chicago this summer, a few weeks before the Whistleblower Summit and Film Festival in late July.

Food is also something he’s excited about for his hometown and the Arkansas Delta.

McCray married “late in life,” and made his home in Pine Bluff, a place he still loves and believes in, and whose own whistleblower, Martha Mitchell, is being played by Julia Roberts in a limited series now airing on STARZ. McCray says he’s thrilled Mitchell’s getting her time in the spotlight after fading from public consciousness to relative obscurity compared to the other key Watergate figures, who he says have capitalized commercially on their fame. She does, however, have an award named in her honor by the Whistleblowers’ Summit and Film Festival.

Acknowledging Pine Bluff’s economic development has come in “fits and starts,” McCray is bullish about its prospects. He cites several new cultural initiatives to bring more visitors, including the Delta Rhythm and Bayous Alliance and the Natural Heritage Trails Task Force among his examples. He says the new development brought by the Saracen Casino and its “excellent” Red Oak Steakhouse is stimulating interest in the area. And he’s optimistic about efforts to promote the area’s cultural and culinary links to the Quapaw Indians, French settlers and African-American culture.

“There are a lot of different food and foodway stories that can be told here,” McCray says. “We’re in the process of trying to embrace our culture to include those stories in terms of attracting tourism development for Pine Bluff and the Delta. It’s kind of a really good time, and hopefully we’ll be able to fully capitalize on those roots.”

His involvement in the James Beard Awards has only increased his interest in food culture and his commitment to helping his hometown grow.

“For me, for somebody who has been a troublemaker — good trouble,” he says, alluding to the moral imperative set forth by civil rights legend John Lewis, “To go to good food, that has been a cool thing.”