From Laughs To Law: Kevin Rook Took An Interesting Route To The Courtroom 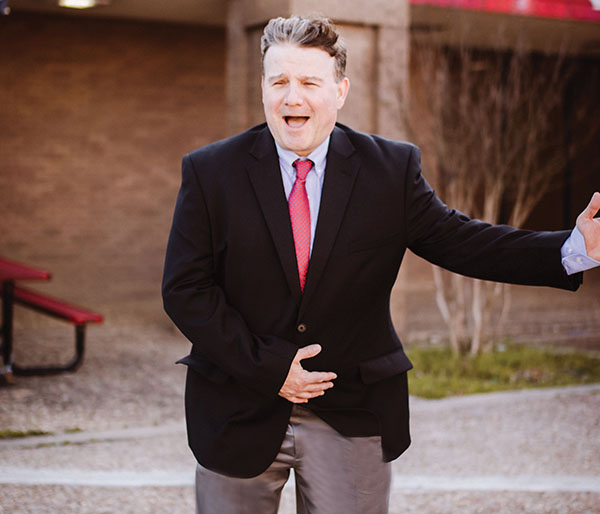 It’s a career that has gone from the laughter of comedy clubs with the likes of Robin Williams and Chris Rock to the somber halls of justice in family law and criminal court. With Rook, there’s always a payoff line and a chuckle at the end of any story about his life.

When he was 11, he was banned from performing at a Jonesboro church following his first show when he poked fun at Jonesboro Mayor Neil Stallings’ inability to fix the town’s roads. Stallings, a member of the church who was in attendance at Rook’s comedy debut, didn’t see the humor in Rook’s act.

Later, when Rook successfully auditioned for a slot at the Comedy Store in West Hollywood, California, owner Mitzi Shore — the mother of comedic actor Pauly Shore — told him to step away from the microphone when on stage. “Get away from the [expletive] microphone,” she said in her raspy cigarette voice. “You can’t see your face.”

He did, and a few months later, Shore complimented him. “Now I can see your [expletive] face,” she said.

In 2005, Rook and his wife, Whitney, won a 2005 Saturn Ion minivan while on the television game show Wheel of Fortune. Sixteen years later, he points to a grey vehicle in the parking lot outside his downtown Cabot office one morning. It’s the same Saturn, albeit now with 330,000 miles on it.

“The transmission’s starting to get a little gimpy,” he says.

And Rook’s first law office in Jonesboro was in a back room of his father’s convenience store on Johnson and Bridge streets where they stored hair weaves. Rook practiced family and criminal law in what they referred to as the “wig room.” The area is somewhat sketchy and rife with crime; many of Rook’s clients were those who ventured into the store for a Mountain Dew and Doritos.

Regardless of where he was, though, Rook always seemed to have fun and enjoyed his life. 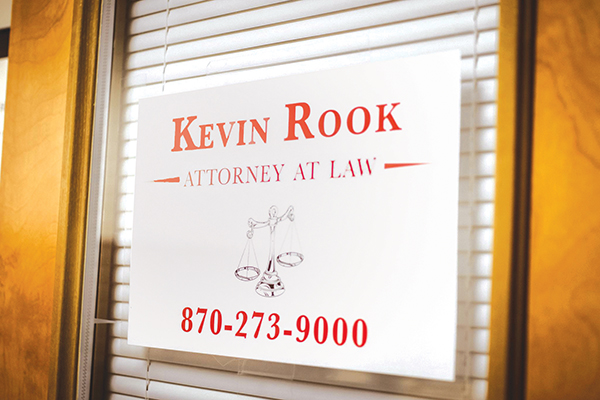 “When Kevin was in high school, one of his teachers told me that he didn’t know if Kevin was learning anything, but he was having a hell of a time,” Rook’s father, Rick, says. “His choices in life were a surprise, but he turned out pretty well.”

Rook was born in Jonesboro and saw humor at an early age. He grew up idolizing comedians Eddie Murphy, Andrew Dice Clay and Steve Martin and was always looking for a laugh. In 1991, he ran for the senior class president at Jonesboro High School merely as a joke. He won the race.

He went to the University of Arkansas at Fayetteville and graduated in 1995 with a degree in history.

“There wasn’t a lot I could do with a history degree but teach,” Rook says. “I worked for my dad at the [Jonesboro] convenience store for a year and decided to go to law school.”

But a month before enrolling back in school, Rook and his then-girlfriend, Whitney, flew to Las Vegas to get married. He says he saw Bruce Willis, Michael Jordan and other celebrities get married before at A Little White Chapel on the Vegas strip, so he thought he and Whitney should do the same. He didn’t tell his parents and instead sent a postcard to them informing them of their marriage that read, “By the time you read this …” He then returned to Arkansas to law school. 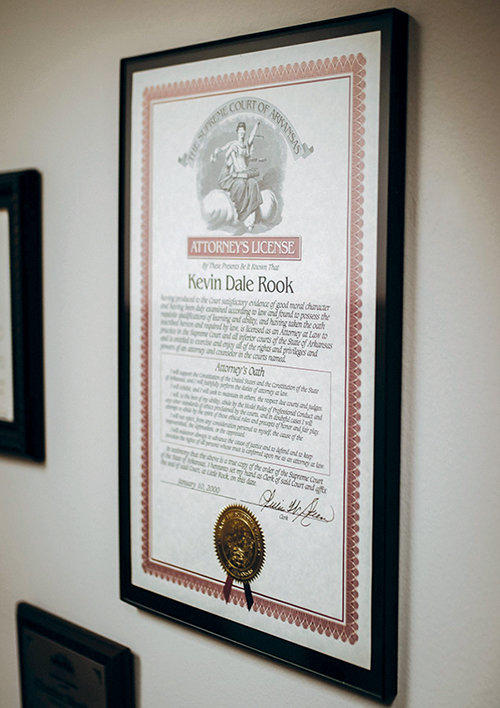 Rook took the bar exam in July 1999 and had no job lined up. The desire of being a comedian, instilled during his childhood days, was still burning in him. He and Whitney loaded their vehicle — and their credit cards — and drove to Los Angeles. They moved into a Motel 6 in El Monte, California, and Rook began trying out at open mic nights at the Comedy Store on Sunset Boulevard in West Hollywood.

He could do impressions and some of his acts included a drunken George W. Bush holding a press conference, Arnold Schwarzenegger as California’s governor, Arkansas actor Billy Bob Thornton in his role as Karl Childers in the movie Sling Blade if Childers were an Arkansas school teacher, and Bill Clinton as an FBI agent interviewing Hannibal Lector, the serial killer in the movie The Silence of the Lambs.

His first show was in August 2000; he followed Charles Fleischer, the voice of the Roger Rabbit character. It was a slow start. He was paid $15 for 15 minutes of stand up and at times he played to two or three people at 1:30 a.m. He began in the “belly room,” a stage for starting comedians and he called Shore each Monday to see when his time slots would be.

Rook was persistent, learning tips from Shore and eventually, he was doing shows on the same stage as Robin Williams, Chris Rock, Bill Burr, Arsenio Hall, Whoopi Goldberg, Martin Lawrence and Roseanne Barr. He knew he made it when club owners stenciled his name on the Comedy Store wall next to other performers.

While Rook told jokes, his wife, Whitney, worked as a dog sitter, often staying with pets in the rich homes of the Hollywood Hills. They also supplemented their income by auditioning for television game shows and that’s where, in January 2005, Rook and his wife found themselves playing the bonus round on Wheel of Fortune. The two responded to a casting call for couples married in Las Vegas and won a position on the show.

After winning the Saturn van and $22,666, they tried to guess the final puzzle. It was “BOY CRAZY,” but the Rooks only had the letters C, R and A in the second word picked and displayed.

Rook thought for a moment and then blurted out, “The craps?”

When he realized how it sounded, he tried to explain. “Not that,” he said. “I meant the craps game in Vegas.”

They didn’t win and when the show went to a commercial, show host Pat Sajak sidled up to him.

“I’m glad you didn’t refer to taking a dump,” Sajak said to Rook.

Rook was also a finalist on the game show Paranoia and was hung in a cage 40 feet in the air and asked trivia questions. He won about $5,000 but missed a question about Pop-Tart flavors for the grand prize of $50,000.

In April 2008, Whitney was pregnant with their second son and decided she didn’t want to raise their children in the bustle of Los Angeles and urged the family to move back to Arkansas.

As they drove through New Mexico on the way home, they received a call from the game show Deal or No Deal, a contest where contestants eliminate sealed briefcases that contain various amounts of money. The show wanted pregnant women and contacted Whitney.

“You could walk away with a suitcase filled with a million dollars,” Rook countered.

The couple continued on to Arkansas.

They returned to Jonesboro and Rook, who kept his law license current, began working as an attorney for the state’s Department of Human Services. Two years of dealing with abused children and neglectful parents were rough, he says, and he opened his own practice in Jonesboro. His father owned Rick’s Quick Shop at the foot of a train bridge on Bridge Street. He helped clients with uncontested divorces in his office that also served as the “wig room” where they stored hair weaves and products.

Three years later, the couple moved to Cabot and Rook took a job as an insurance adjuster in Little Rock. He soon got bored with the position and opened his own practice in an office in the Cabot City Waterworks building in 2014 where he’s been since.

Jonesboro attorney Scott Emerson went against Rook in some divorce cases but found him to be a likable foe.

“He’s a great guy,” Emerson says. “The use of humor in the courtroom can be a great benefit or a detriment to you. You can come across as a smart ass. But to persuade a jury, they’ve got to like you. There’s a fine line to walk, and Kevin did very well.

“He gave them a reason to like him and his clients.”

Rook said he did keep the jokes at a minimum while in court. Once, a client texted him, asking for a receipt for a payment she made. However, her text program typed in “recipe,” instead of “receipt.”

Rook sent back a text, “First you brown your ground beef and drain the grease …” He sent a recipe for making spaghetti.

“She didn’t think that was too funny,” he says.

“Judges don’t appreciate a comedy act in the courtroom,” he says. “It was unusual to see someone with his comedy background having a law practice, but he was always truthful and professional. You don’t always see that in attorneys.”

Rook still has the urge to grab a microphone, get on stage and do comedy. He’s performed at country clubs in Jonesboro and Paragould and once won tickets to a James Taylor concert by doing standup at a downtown Jonesboro club. He was also named one of Arkansas’ funniest people during a contest in Little Rock in 2011.

Rook admits that his life has been an odd series of events, but he was able to do what he wanted to in comedy, and he was successful. It’s like a bit of advice his father once told him, Rook recalls.

“He said what I did was rare,” Rook says. “He said, ‘Everybody wants to be an astronaut, but only 11 people got paid for going to the moon.’”