From Our House to Yours

Linda Fertsl is a long-time volunteer for Our House.

hey’re two simple little trays meant for holding deviled eggs, each with eight not-so-perfect oval indentations. Because they’re made of silver metal that feels like more like cast iron than aluminum, they seem vintage, like they’ve known many family barbecues. However, the story to be told isn’t about these little treasures, but of the place where they were found.

The hands that rang up these trays for $1.99 each and then gingerly bagged them belong to Karen Moix. Moix is a trainee at From Our House to Yours, a thrift store where proceeds benefit Our House shelter located downtown. Moix is smiling and professional and a bit guarded. It’s not been long ago that she was a resident at the shelter. She’s been working for the store since July 26 and now has her own apartment thanks to participation in the job training/placement, financial literacy and other programs offered at the center.

“I was in a very dark place in my life,” she said from behind the register at the store, located at 8609 W. Markham St. Choosing her words carefully as if the darkness of her past might materialize behind her and snatch her back, she continues, willing to share only so much. 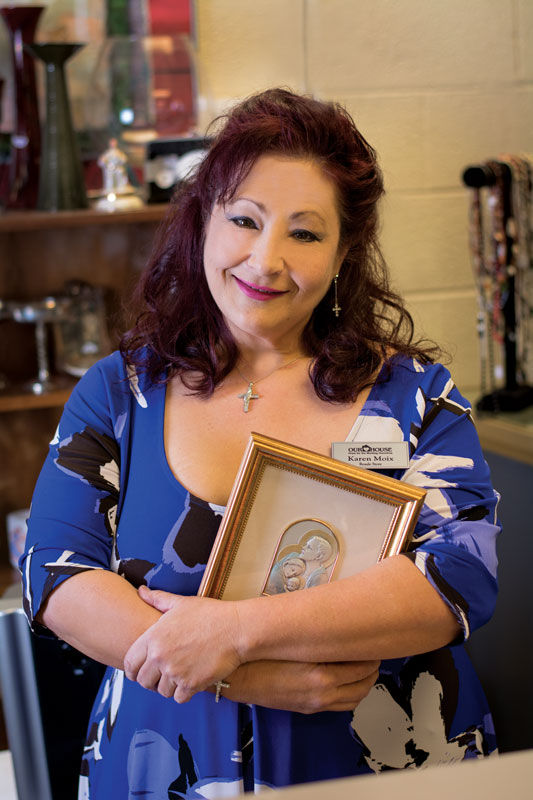 Karen Moix, a trainee of the From Our House, feels good about selling jewelry to those in need.

“You can’t predict the future. I had always been a professional woman, but health reasons and life circumstances happened. Homelessness doesn’t discriminate. I knew about Our House, but I had never thought of becoming a resident there. A very good friend, who was a stranger at first, brought me to Our House. To have people who were so supportive and that didn’t look down on me and judge me, people who gave me an opportunity was the best thing that’s happened to me.”

Justin Robinson, operations manager for the store, smiles proudly when he talks about Moix. He said he knows it’s only a matter of time before she leaves for a better job as two other women have already done. Our House reports that in 2016, 517 adults were placed in jobs with 277 central Arkansas employers.

“It’s hard to let them go, but that’s exactly what’s supposed to happen,” Robinson said. Moix’s departure will likely come sooner rather than later. A donor recently gifted the shelter a car that needed some work. Robinson said McLarty Auto has donated the repairs and Moix should be getting the vehicle as a Christmas present.

“Reliable transportation is her final hurdle,” he said.

At the store, which has a donation center for easy drop off, Robinson is happy to take gently used items. Those things that aren’t used in the shelter are sold at the store, which has been open since July. The store has a wide-ranging selection, with everything from DVDs and toys to clothing, shoes and housewares to armoires, headboards and an oven. Thanks to Bale Chevrolet, which donated a large moving truck, he even has a way to come get large items. The store is open Monday through Saturday from 10 a.m. to 5 p.m. To schedule a pickup, call 501.859.6101.

Starting in early summer 2017, Our House will open a 9,000 square-foot resale shop and donation center in North Little Rock to keep up with demand, according to Robinson. That store will be located between the Hobby Lobby and Tuesday Morning stores at 4653 JFK Blvd.

With the pride of a new parent, Robinson said the operation has come a long way from when he started out as an Our House volunteer seven years ago. He said his job then was picking up furniture and other large donations when he had down time from selling real estate.

Our House reports that so far this year, the shelter has provided a home to 753 men, women and children, helping 80 percent of them overcome homelessness.

Linda Fertsl could just about call the store and shelter home. For years, the feisty senior citizen has been volunteering with her church, Trinity United Methodist. She said the Sunday School classes take turns cooking in the Our House kitchen so the staff can have days off. She and Justin are easy friends, laughing and chatting. On this chilly and overcast Wednesday, she’s stopped by on her way to the center with coats she’s collected. Her last collection drive yielded several big bins of new underwear for the children at the shelter.

“If I hear someone say they’re cleaning out the closet; or they’re moving and don’t want something, I tell them to give it to me. If I see somebody put something out on the street, I’ll go get it and put it in my car and drive it over to donate,” she said. “It’s just amazing what people will put out on the street.”

Moix knows all too well that being on the street doesn’t mean being without value.

“My favorite saying now is ‘But by the grace of God there goes I’ because I never thought I would be at Our House, but I’m so grateful for that. There’s a stereotype of the homeless that they’re drug addicts, alcoholics, someone that’s going to rob you, someone who doesn’t want to do anything with their life and that’s not the norm. Our House has given me and numerous people the opportunity to show that to be homeless doesn’t mean that you’re a criminal. To be homeless doesn’t mean that you’re worthless.”