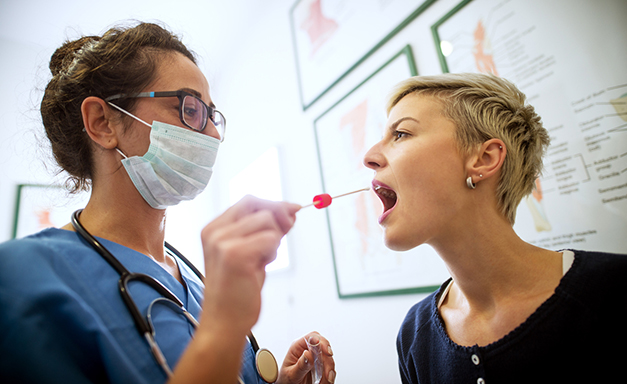 Ovarian cancer has been called a “silent killer” due to the difficulty of detecting the disease in its early stages. Largely curable in Stage I and II, it is virtually fatal in Stage III and IV. Doctors have struggled to determine how to detect the disease before it is too late.
However, medical professionals are advocating for increased genetic testing, which many believe will catch the mutations behind ovarian cancer, as well as breast and other forms of cancer.
Dr. Danna Grear, a clinical breast radiologist with the Breast Center, encourages women to have genetic testing done as early as possible to prevent the development of any cancers. One of the misconceptions that Grear has seen during her career is the notion that genetic testing is primarily for patients who have already been diagnosed with a disease in order to pinpoint the cause and help the patient’s family establish a history.

Know your risk of developing cancer.

According to Grear, the Breast Center has provided genetic testing since the early 2000s, and since that time, the tests have become increasingly accessible to patients due to standardized guidelines. Originally, the tests were conducted primarily for patients who had already been diagnosed with a cancer, but the clinic has shifted to preventive care in recent years.
“Around 2004, we started talking to patients about genetic testing, and granted, in our early days, we were really talking mostly to people who were already diagnosed with a cancer, and we were trying to figure out why they got cancer and should their family members be worried,” Grear says. But we’ve come so far from there because now we have good national guidelines for what patients should have genetic testing and insurance covers that genetic testing really well.”
Individuals with any history of ovarian cancer in first, second or third-degree blood relatives qualify for genetic testing. For breast, colorectal or endometrial cancer, if there is one case of cancer in a family member under the age of 50, the patient qualifies for genetic screening. In addition, two or more cases of these cancers qualifies a patient for testing. 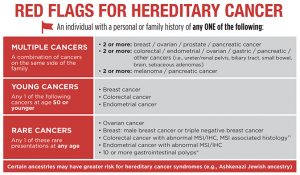 “This is very available to people who have family histories, and it’s also very affordable to people who are qualified,” Grear says.
Finding a hereditary genetic mutation through the tests can save patients’ lives. Approximately 1 in 4 ovarian cancers result from a hereditary genetic mutation. By having the testing done, patients and their doctors can chart a path forward to prevent the development of the disease or head it off before it reaches its end stage. In the case of ovarian cancer, removing the ovaries is one way to lessen the chance of developing cancer.
Having testing and procedures like ovary removal done is critical to limiting the chance of cancer.  “Your risk is very, very small that you’re going to be affected by the disease,” Grear says. “That’s why we want to test patients early as opposed to waiting until they’re older because ovarian cancer happens more in older women.
RELATED: Learn more about breast cancer.
In Grear’s clinic, over 800 individuals were tested last year, and 72 were found to have a genetic mutation. Of those 72 patients, 76 percent had not been diagnosed with cancer. “It just opens up a world of opportunities to prevent you from developing that cancer or to identify it early,” Grear says.“If you’re found to have a genetic mutation, then your insurance company is going to cover having your ovaries removed or having either high-risk screening of your breasts…or actually removing the breast tissue,” according to Grear.
Having the test is a fairly simple matter, as well. A risk assessment is administered, which helps the physicians determine if the patient is qualified to receive genetic testing. Once a risk assessment is completed, a saliva sample is taken from the individual and given to a lab. White blood cells are extracted from the saliva sample, and the genetic material from the white blood cells are tested for mutations.
Patients should ask their primary care physicians about genetic testing if they are concerned about the likelihood of cancer or if they have a history of cancer. Many doctors will refer patients to clinic that perform the tests, according to Grear. “The most important thing is to tell patients that, if they have those family histories that they think might be worrisome and it doesn’t have to be a lot…, they should ask their doctor if they should have genetic testing,” she says.
While Grear wants the testing to be beneficial for patients’ families, she is committed to helping women prevent the cancer before it becomes life-threatening. “We want identify mutations in women before they develop cancer to help them,” she says.
RELATED: Read our story on ovarian cancer in the September edition of AY Magazine!