Get in the Spirit, Rock Town Turns Six

If you haven’t yet heard, Rock Town Distillery is celebrating six years this weekend. That means, of course, there will be a 6th anniversary Bourbon, and two exclusive sit down tastings on Saturday, June 25th at 2 p.m. and 5 p.m with distillery owner Phil Brandon at the helm. To get you in the spirit, we sat down and chatted with Brandon about the past six years and what to expect this weekend.

AY: Let’s start with the fun stuff. What are you most excited for this weekend?

Phil Brandon: To get to share our whiskeys with people and talk about them is always the most fun for me. I love talking about how we make them and sharing some of the history that whiskey has in this country.

AY: Looking back, what do you think has been the most difficult thing to overcome in the past six years?

PB: Getting the word out. It’s too expensive to advertise, so we’ve relied on word of mouth and social media to let people know about us. Almost everyday someone says to me something like, “I didn’t know there was a distillery in Little Rock.”

AY: Thankfully, hitting the six year mark shows you have staying power. Tell us, though, is this rumor of bourbon barrel shortages true?

PB: We’ve been lucky sourcing barrels so far, but there’s only so many cooperages and they’re all operating at full capacity. We get some of our smaller barrels from Gibbs Brothers in Hot Springs, and we also use McGinnis in Cuba, Missouri, Independent Stave in Lebanon, Missouri, and Kelvin in Louisville, Kentucky. Each cooperage’s barrels have a different taste profile, so we use different ones to achieve certain taste profiles.

AY: Speaking of taste profiles – on to the drinks! Tell us what to expect when we try the 6th Anniversary Bourbon this weekend.

PB: It’s a four grain, sour mash bourbon. It’s distilled from 62.5 percent corn, 12.5 percent wheat, 12.5 percent rye and 12.5 percent malted barley. We made it using the “sour mash” process, where part of a previous batch’s stillage is used to start the batch. It was aged for a little over 29 months in a 53-gallon new charred oak barrel from McGinnis Cooperage. It’s a rich bourbon, with notes of oak, caramel, and spice.

AY: That sounds absolutely delicious. We hear you’re going to have other great tasters on Saturday. Any chance you can tell us what their profiles are like?

AY: We can’t wait to try them all. Lastly, do you have any big plans for the future?

PB: Yes, we plan on releasing an anniversary whiskey every year. Our biggest change for the future is that we’re building a new distillery and will be in it by January 2017! 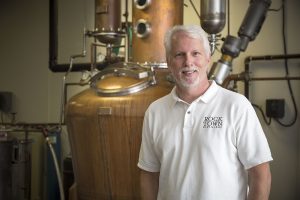