Getting Ready for March Madness: A Razorback’s Fan Guide 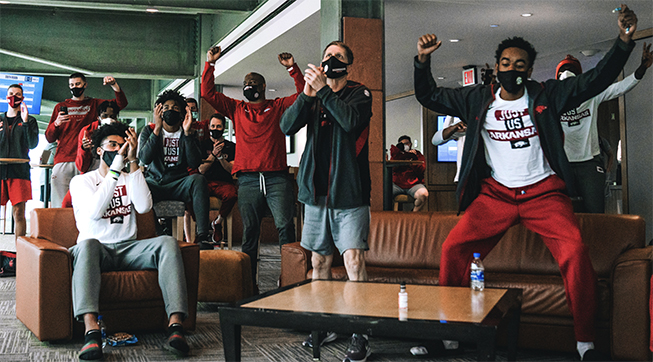 Are you as excited for March Madness as these guys? (Photo credit: University of Arkansas Athletics Department)

Are you ready to embrace the madness this weekend?

It will be a big week for Razorbacks fans, as the Arkansas men’s basketball team has clinched the no. 3 seed in the 2021 March Madness tournament. The Hogs will face Colgate University in the first round on Friday.

This is the first time since 2018 that Arkansas has made it to the NCAA Tournament, and the team has been on fire lately with a 12-game winning streak before its loss to LSU in the SEC Tournament semifinals.

But the game isn’t just about sitting down and watching it. It’s a communal ritual – at least as much as possible during the pandemic. It is an event that we bond together over, creating memories and, most importantly, eating food.

What are you going to be eating during the tournament? According to Shipt, a personal shopping and delivery app, the most popular snack during last season’s basketball season in Arkansas was Sabra hummus. Of course, that’s just one site, and we think that there are plenty of food options to help you enjoy the game.

For example, Cypress Social will be hosting a special March Madness event, offering bar specials, such as homemade Cypress cornbread, chili cheese fries, cheese curds and more, as well as burgers and sandwiches on Friday and Saturday from 11 a.m. to 4 p.m. Don’t sleep on this!

Depending on how the tournament goes, you might need a pick-me-up. Rock Town Distillery, as always, has your back. On Tuesday, March 23, Rock Town will host an in-person cocktail making class at 7 p.m. During the class, you will learn how to make a Side Car and a Rob Roy.

March Madness is the perfect time to test out one of the many food trucks in Arkansas. Food trucks provide a wide range of food, and you can pick it up and head back to the house for the game. Check out our list here.

March Madness officially kicks off on March 18 with the First Four games, with the second round games being played on March 21 and 22. The Sweet 16 games will be held March 27 and 28, and the NCAA Tournament final will be held on April 5.

Got a March Madness event going on? Let us know at [email protected]