Getting To Know Jonesboro

Most of the little that I did know about the home of the A-State Red Wolves I learned when many of my high school friends headed northeast for Arkansas State University.

My friend Casey and I attended a Relient K concert there when we were 15. (Her dad drove us). I remember Crowley’s Ridge is somewhere up in that direction too, but after that I draw a blank.

But on my mission to find some jewels in Jonesboro, however, I realized that my limited exposure had deprived me of more than a few weekend road trips I would have taken otherwise.

With a population of more than 71,000, it’s the fifth-largest city in Arkansas. It’s home to Arkansas State University, which enrolled 14,085 students last fall. That’s nearly 20 percent of the city’s population.

Jonesboro’s downtown association has made it a goal to make the city a happening place. From April until October, the Downtown Jonesboro Association (DJA) hosts Alive After Five; a farmers’ market founded in 2013 by the DJA to promote community in the city, and to create a gathering place for farmers and artists and crafters to interact with “downtowners,” as the DJA affectionately calls its Jonesboro citizens.

The DJA also plays host to Pack Pride Weekends, which includes Friday night activities, Saturdays at the Red Wolves game, and then Brunch and Browse through downtown on Sunday.

Alive After Five and Pack Pride Weekend aren’t around all year long, but there are plenty of other opportunities to keep us downtowners, and that includes in-towners and out-of-towners, busy.

By way of restaurants, Jonesboro has its classic go-tos like Skinny J’s and Omar’s Uptown, as well as the brand-new N’awlins Arkansas, which opened in December.

John Miller and his dad, Glin Miller, opened N’awlins with arms full of family recipes and a passion for Cajun food, not to mention a combined 40 years of restaurant management experience. 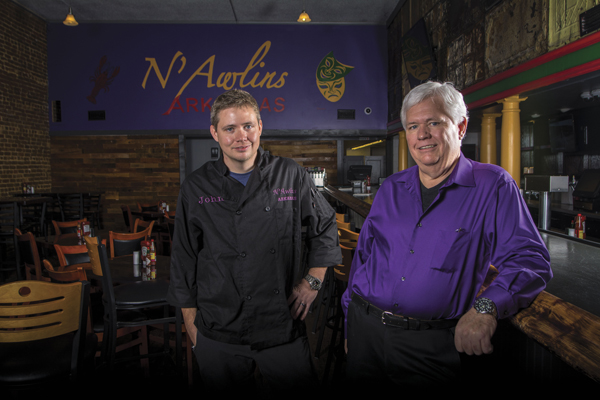 John and Glin Miller, father and son and 50/50 partners, want to expand N’awlins farther than Jonesboro, but have no plans to open locations outside of Arkansas. 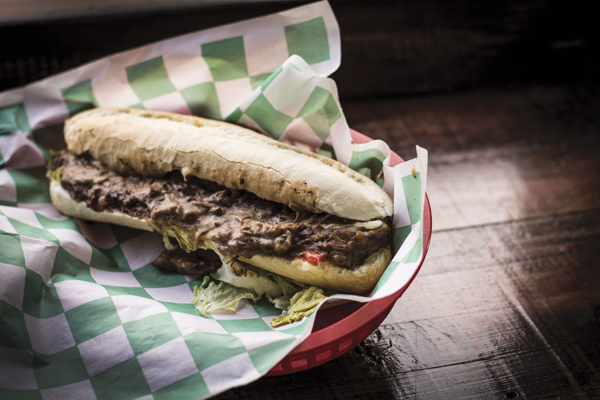 When you think of New Orleans and now N’Awlins, it’s Louisiana classics like red beans and rice and sausage and po’ boys with crusty bread.

When I talked to John, N’awlins had been open for only three days, but they’d already had three-time returning customers. The early crowd favorites were the Jambalaya Pasta and the Crawfish Etouffee, John said. You can eat at N’awlins for a little more than 10 bucks, and the most expensive item on the menu is a $25 ribeye.

For night-timers, Cregeen’s Pub offers live music and a family-friendly authentic Irish atmosphere, except that it’s smoke-free indoors. The pub has 29 beers on tap and more than 70 bottled beers, some of which the owners claim aren’t available anywhere else in Arkansas. 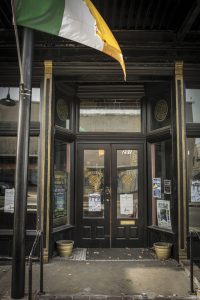 Cregeen’s in downtown Jonesboro offers live music on Friday and Saturday nights, and a Sunday brunch menu that includes duck wings and the Irish Breakfast, which is served morning, noon and night.

The menu includes Irish nachos made from “homemade crisps” smothered with Cregeen’s spicy sauerkraut recipe, Gouda cheese, corned beef and sour cream. Nachos or not, the chef recommends that diners finish their meal with a dessert of Irish bread pudding with Jameson sauce and an Irish coffee.

If Cregeen’s sounds familiar, you probably know it from the only other Cregeen’s pub, which is in the Argenta district in North Little Rock. Cregeen’s is Gaelic for “little rock.” The North Little Rock pub was built in Dublin and shipped to Arkansas. Sounds pretty authentic, right? While the Cregeen’s in Jonesboro wasn’t built in Ireland, it creates the same atmosphere with items shipped in from Jonesborough, Ireland.

As you would expect of a downtown that is working hard to attract visitors, Jonesboro is creating an art scene, which includes Fearlessly Brilliant, a community art project the Downtown Jonesboro Association sponsors to beautify public space in Downtown Jonesboro.

The second installment of Fearlessly Brilliant, another mural, is three lion’s heads stretched 80 feet across downtown. It was completed this summer through a partnership with ASU’s Fine Art Department.

According to Hailey Knight, Executive Director of the Downtown Jonesboro Association, two more murals will be unveiled in the arts and entertainment district of  downtown. Local artists Beau Jones and Tolik Rayevskiy’s designs, selected from more than a dozen submissions, will be revealed in early 2017.

The Foundation of Arts has been serving the Jonesboro area for 30 years with a mission to “enhance the quality of life in [the Jonesboro] community through the arts.” The FOA offers art, dance and theater classes for 3-year-olds and adults alike. The Foundation’s community theater has plans for a summer musical, children’s plays, adult comedies and dramas, and the Nutcracker Ballet every single season.

A Little Blackjack Never Killed Nobody is the January 2017 fundraising production to benefit Jonesboro’s Foundation of Arts. The event is Friday the 13th and starts with cocktails, dinner, dancing, casino games and then a murder mystery show. Tickets are $125 or $800 for a table of eight.

With all of this, all of the city’s activity isn’t restricted to downtown or within four walls.

Jonesboro’s Craighead Forest Park, established in 1937, is nearly 800 acres of running and biking trails, camping and fishing, disc golf and horseshoes, softball, volleyball, and basketball and three playgrounds that are handicap accessible.

“[Craighead Park] is a city park with the appearance of a state park,” said Danny Kapales, assistant director of Jonesboro’s Parks and Recreation Department.

Along with the 17 miles of mountain biking trails, Craighead has wooded trails for horseback riding and an 85-acre area for ATV riders. Park-goers, however, must provide their own bikes, ATVS, and yes, their own horses.

And if Craighead Park doesn’t satisfy your yearning for the outdoors, Crowley’s Ridge State Park is just 16 miles north of Jonesboro. The park boasts structures built in the 1930’s by the Civilian Conservation Corps. It has cabins for overnight stay, as well as several trails for hiking.

Now I know, and you know, and if you want to know even more information about all the fun in Jonesboro,  go to www.downtownjonesboro.com.