Gilbert: A Town That Time Forgot

Gilbert: A Town That Time Forgot

There are exactly 500 cities in Arkansas larger than Gilbert. With its 24 residents (down from 28 in the 2010 census), this Searcy County town’s not likely to move up in the population rankings anytime in the near future. But that doesn’t faze Mayor Alvin “Chip” Johnson. Three years ago, Johnson and his wife, Jamie Craddock, moved to Gilbert from Texas and haven’t looked back.

The 44-year-old Johnson has been in office about 15 months, following his appointment by the city council following the resignation of his predecessor. When questioned about the best part of being mayor, Johnson has a ready answer: “I really enjoy it,” he says. “I get to see everybody in town two to three times a week.” His constituents appreciate the new culverts that have been installed and also the recent repaving of the local streets. As for his next priorities, Johnson is clearly excited about the prospects of Gilbert being designated the first “Dark Sky” community in Arkansas, a title that will appeal to folks interested in observing the stars and planets free from light pollution. 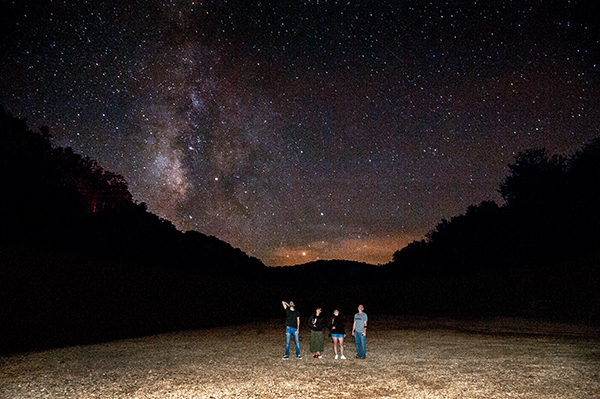 Isolation from the excesses of 21st-century civilization makes Gilbert a favorite for those seeking quiet and solitude.

That isolation from the excesses of 21st-century civilization makes Gilbert a favorite for those seeking quiet and solitude. Gilbert’s location in the middle of the Ozarks, at the far end of Arkansas Highway 333, and along the Buffalo River contribute to its reputation as a place to get it away from it all. 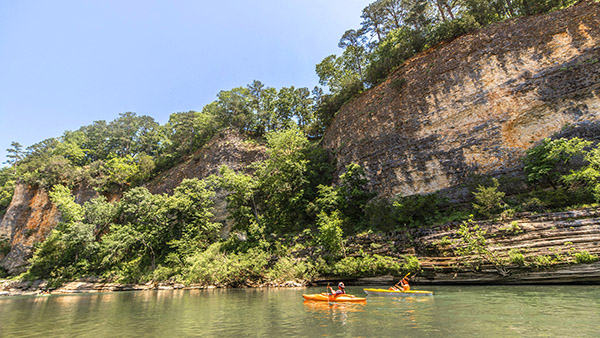 For a place so small, the opportunities are as vast as the nature in Gilbert and the surrounding area.

But that hasn’t always been the case. Founded in 1902 as a railroad town and named after the secretary/treasurer of the company laying the tracks, Gilbert soon claimed a post office, cotton gin, two hotels, four stores, a gristmill, several wood mills and a saloon — the latter of which was swept away by the raging current of the Buffalo River in the great flood of 1915.

One of Gilbert’s wood mills produced 7-inch cedar slats for shipment by rail to the Eagle Pencil Company, a Danbury, Connecticut, firm that manufactured millions upon millions of pencils annually for the country’s students. Hundreds of men cut cedar trees on the steep hillsides for miles upstream from Gilbert, shoved them into the Buffalo River when water conditions were right, and then rafted them down to the mill. One flotilla, consisting of 185,000 logs, drifted down the Buffalo for 22 days before arriving at Gilbert. Stacked on shore, the 12-foot logs were later processed by the slat mill.

Gilbert was also the site of an unusual social experiment — the Incoming Kingdom Missionary Unit, a millennialist group led by Rev. John Adams Battenfield, a minister from Ohio. After a year spent scouting sites (to include seven preliminary trips to Gilbert), the sect’s leaders in late 1920 bought property in the town for their religious colony. Within a few months, the group had about 70 members living in Gilbert — and preparing for a coming holy war between Catholics and Protestants and then the world’s end. 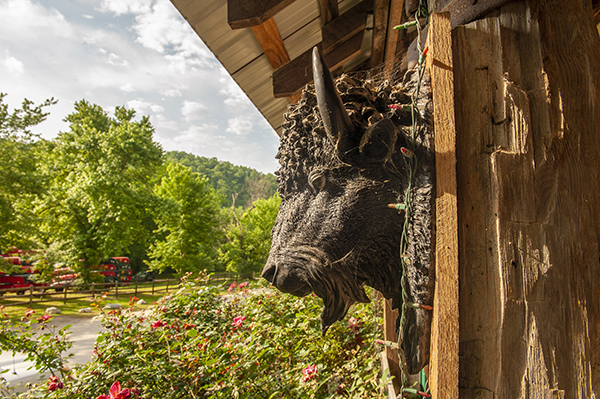 Despite Battenfield’s charismatic personality and extraordinary speaking skills, the colony had its problems. Plans for a shoe factory, textile mill and community sawmill never materialized, and the concept of communal ownership didn’t work because some members, as one wrote, “are inclined to want a share in what possessions others have, but to keep to themselves their own possessions.” But the biggest challenge was Rev. Battenfield’s total nervous breakdown following his repeated but unsuccessful attempts in February 1925 to resurrect a dead member of the congregation. Battenfield quickly left town, and most of his followers eventually abandoned their utopian project in Gilbert.

The demise of the Incoming Kingdom Missionary Unit didn’t signal the end of Gilbert, but the loss of the Missouri & North Arkansas Railroad came close. The M&NA (sometimes known as the “May Never Arrive”) went out of business in the mid-1940s. The steel tracks were removed to aid in World War II efforts, and the Gilbert depot was sold in 1945. 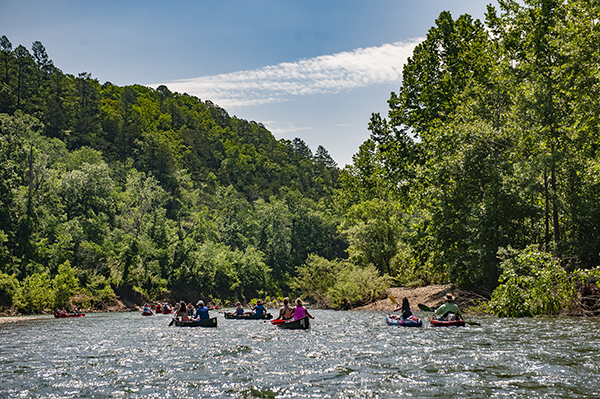 One of Gilbert’s main claims to fame was in dispute until fairly recently. For decades, the town regularly appeared on weather maps as Arkansas’ coolest town. When Ida Killion retired as Gilbert’s official National Weather Service observer, her monitoring station was relocated to a new observation post 100 yards away and a good 30 feet higher. The horizontal change wasn’t a factor, but the difference in elevation meant that temperature readings were 2 to 3 degrees higher than previously. As a result, Calico Rock, located on the banks of the White River some 35 miles east of Gilbert, and Mammoth Spring, 75 miles to the northeast at the source of the Spring River, suddenly began competing with Gilbert for this highly-coveted distinction. But in recent months, Gilbert’s official weather reporting station has moved downhill to the historic Gilbert General Store (circa 1901) — and the town has reclaimed its title as Arkansas’ coolest town, a fact proudly noted on signage along the quiet highway welcoming visitors to the community.

Ben Fruehauf, longtime owner of the Gilbert Store, dutifully submits his reports to the National Weather Service each and every day. Fruehauf got his introduction to the Buffalo River as a youth way back in August 1970, when his father brought the family from their Oklahoma City home to the river for what the elder Fruehauf thought would be a three-day excursion from Carver to Gilbert. The Buffalo is typically low in August, and 1970 was no exception, turning the Fruehauf family’s planned three-day adventure into a four-and-a-half-day ordeal. At the end of their long float trip, Fruehauf recalls telling his dad that he never wanted to see the Buffalo again. 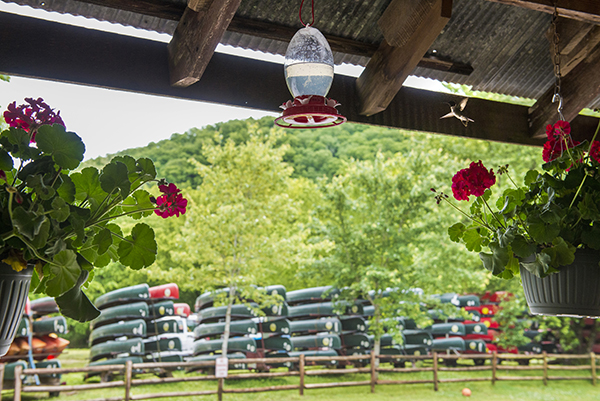 Despite this rather inauspicious introduction to the river, his father determined that Gilbert was the place to raise his family. He established Buffalo Camping & Canoeing half a century ago (in 1971) and then bought the Gilbert General Store in 1988. Today, in addition to renting canoes, kayaks and rafts, the business offers a variety of lodging options (cabins, cottages, guest homes, tent camping, horse camping, RV camping), shuttle services, a nicely-stocked store and outdoor dining/entertainment at Ben’s Place (named in honor of the late elder Fruehauf).

In addition to running one of the oldest concessionaire operations on the Buffalo National River, Fruehauf’s found time to honor his civic obligations, serving 11 years on Gilbert’s city council and another nine years (1997-2005) as mayor. As you might expect, he’s a staunch advocate of this small Ozark community, in particular, noting “the cleanliness and pristine look” as visitors enter the town. “Gilbert,” he says, “is just like a Norman Rockwell painting.” 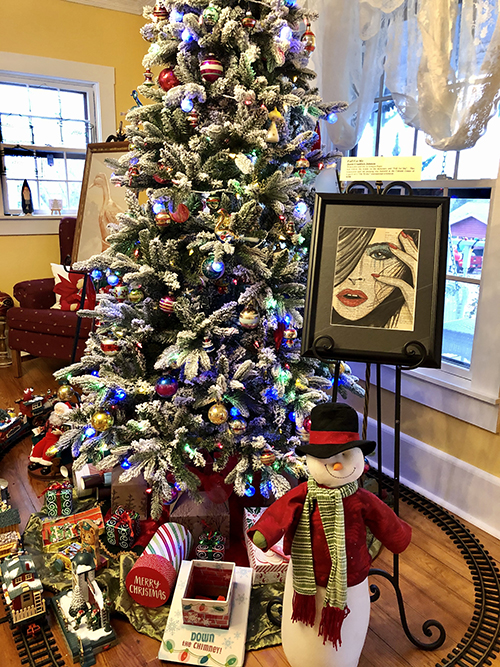 Which provides an ideal segue to the Buffalo River Art Gallery, a business opened a couple of years ago by Jamie Craddock. Not only does the gallery feature the work from dozens of Ozark artists, it regularly offers a variety of art classes, lessons and events, such as the monthly paint parties. It’s currently filled with a delightful assortment of handmade Christmas ornaments and décor. On Saturday, Dec. 4, the gallery will host its “Christmas in Gilbert” extravaganza featuring Miss Arkansas, live music and Santa Claus himself. 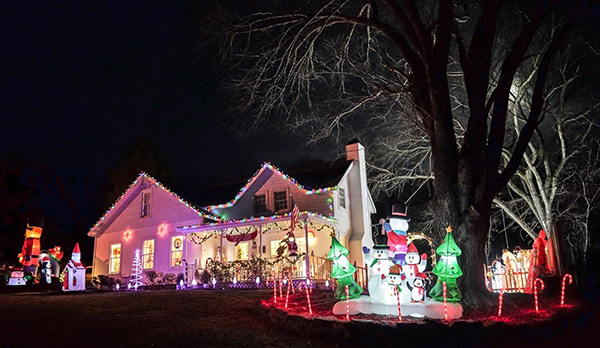 Given that Gilbert is the only town in Arkansas whose city limits butt up against the Buffalo National River, a trip to this quaint community should include a Buffalo River experience. The big gravel bar on the southern edge of town offers an ideal place to sit back and watch the water flow or perhaps skip a rock or two toward the steep hillside on the opposite shore. There’s an easy walking trail heading downstream that leads to the towering piers of the old M&NA bridge over the river. And one of the best views on the entire river is located a few miles east of town. Known as the Red Bluff overlook, it provides a great photo op of the river’s beautiful horseshoe bend. Stop in at the Gilbert General Store, and ask Ben Fruehauf or one of his associates for directions. But remember that Red Bluff is a steep spot, so watch your footing, and keep a close eye on any youngsters. 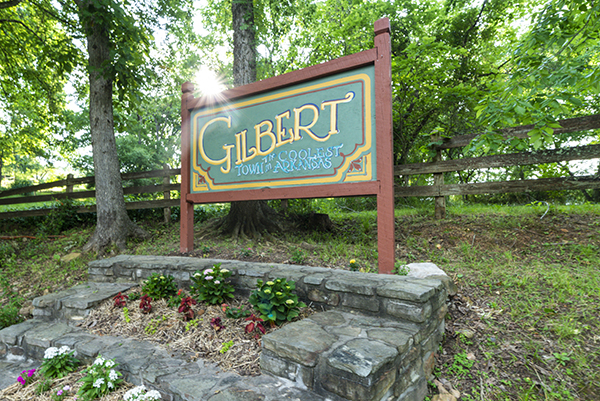 With its location on the Buffalo National River, a fascinating history and a growing popularity with the arts community, Gilbert is a pretty special place in the Natural State. Ben Fruehauf totally agrees, calling his hometown “the Aspen of the Ozarks.”

READ MORE: Mount Ida: A Little Gem of the Ouachitas