Giving the Gift of Freedom

Ron King is a man of humility in his understated acknowledgement of his simple desire to make a difference in children’s lives with a bike of their own.

King recalls watching a Christmas news story in 2008 about local police taking unclaimed bikes from police storage units and repairing them. “It reminded me of my first bike and how important it was to me. I thought about the freedom and responsibility it gave me. I thought every kid needs to have that experience.”

He committed then to buy 100 bicycles by the next Christmas to give away. “I didn’t know how I’d give them away,” explained King.

The first bike he purchased was on July 31, 2008. King was on a mission. “I bought a few bikes, and soon friends were bringing me bikes. I was telling anyone and everyone what I was trying to do.”

Within three months King had collected 400 bikes. By Christmas 2009, instead of the 100 bikes he had vowed to give away the previous holiday, he distributed 300 of the bikes. This year King will donate 2,000 bikes through numerous ways. That makes more than 12,000 bikes Recycle Bicycles For Kids has provided since its inception in 2008.

Recycle Bicycles For Kids is located in Little Rock’s downtown industrial supply area near Heifer International and the Clinton Presidential Library. The gift of a few bikes has grown into an official nonprofit with a recently earned 501 (c)(3) designation.

True to his commitment of giving free bikes, King’s organization gives with no conditions if a child is under 16 years old. For teens 16 years and older, volunteer work is required in the form of helping to repair bikes at the shop or assisting with needs associated with bike repair.

For more than eight years, thousands of children have been gifted with free bikes from Recycle Bicycles For Kids. While there are 30 individual recycle bike donation locations around the country, this is the only one that is totally free.

To King’s surprise, the reach of his organization has expanded in unexpected ways to help people like the homeless. “It wouldn’t surprise me if there are more homeless in Little Rock riding bikes than any other city,” he said.

According to King, the free bikes are a lifeline for struggling adults in need of transportation to shelters, a soup kitchen or a job interview. “Many of the jobs they have may only be for 10 or 15 hours a week, leaving them financially unable to purchase transportation.” King explains many are homeless by circumstances such as divorce or job loss. “They’re trying to get back on their feet.”

Recycle Bicycle provides all of the bikes for Our House that cares for homeless families, King noted. “We also work with Arkansas Children’s Hospital to provide bikes for kids that are overweight as a fun way to increase their exercise while improving their health. In addition, the organization provides tandem bikes, which require two riders, for the Arkansas School For The Blind in Little Rock, giving non-sighted children an opportunity to enjoy the 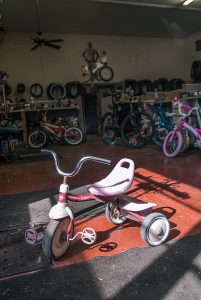 More than 12,000 bikes have been donated since the organization began in 2008. Riders are able to trade in bikes as they outgrow them.

When asked about the sense that fewer children receive bikes for Christmas, King has his thoughts. “The idea that every family can go to Walmart and buy four or five bikes is asking a lot,” stated King. “We’ll have kids come in here to pick out a bike. You assume they’ll pick out the newest looking bike, but they don’t. It could be one with a ripped seat or rust on it. It will be a certain color, or a bike with pegs on it, or a certain wheel style they like.”

According to King, when you take a kid in a room with hundreds of bikes, and you tell them they can pick anyone they want, it’s overwhelming for them just as it is for the parents watching. “These are kids who may have been told when previously asking for a bike, you can’t have one –they’ve heard this for seven or eight years, and now they can pick what they want? It may literally take them hours to decide on the right one!”

With recognition that kids are still growing, they can return to trade up for a bigger bike.

King is supported daily in his mission by Recycle Bikes For Kids Director Joe Manero.

A little blurb in a paper brought Manero to Recycle Bikes For Kids. “I had a bike that I was taking to a repair shop regularly, that I couldn’t afford,” explained Manero.” The shop owner told me to go see Ron (King). He laughs as he says it also a means to get himself in front of King, who was hiring at the time.

Manero tells of a recent interaction with parents of five kids, 6-15 years old, who have never had bikes. “The parents were just overwhelmed watching their kids select bikes. The dad insisted on donating $25 to us.” He assured him the bikes were free, but the dad said he had to do something to give back in appreciation for what he was experiencing through his children.

King has been doing this long enough to see many of the first batch of kids to receive bikes now attending college. Some return during the summer to help. “It’s a community effort to keep this humming. We have children and adults from places of worship, civic and corporate groups come to help repair as well as to donate bikes and make financial contributions.

With new commercial and residential developments unfolding on the east 6th Street corridor, King finds his location in the middle of a hot real estate zone. His building has been sold and will be renovated for new use. “I want to thank the Cromwell Firm for allowing us to stay past our lease, which expired in October, at no cost through the Christmas season, which is obviously very busy for us.”

Desperately in need of a similar location as of Jan. 1, King is optimistic someone will make themselves known and “gift” him with a large space to continue his mission. “I need it to be free space, with a working bathroom and electricity. Doesn’t have to be fancy.”

King is optimic that a new location will be found soon. “I’m not sure where we’ll relocate as of yet, but we’ll continue on collecting, repairing and providing bikes – there’s too much need and too much resource and people who want to help.”

Recycle Bicycles For Kids has public volunteer days where individuals can drop by to help. Groups can schedule volunteer time on private volunteer days. To see how you can help, visit Facebook at