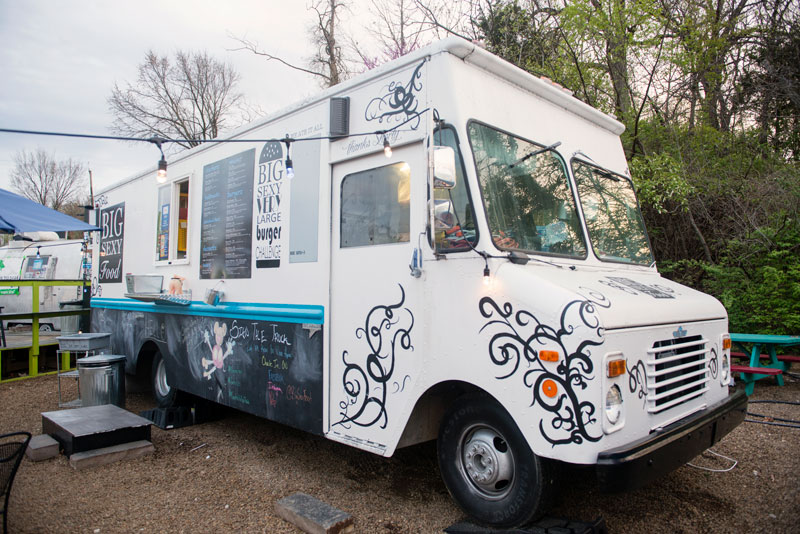 Food trucks have exploded in popularity over the last few years. They’re a convenient way to grab some delicious on the go. And if you’re an entrepreneur, it’s a perfect way to test the waters on your idea without jumping in too deep and starting your own brick and mortar restaurant. Northwest Arkansas has seen an explosion of these mobile culinary labs in recent times.  While this list is far from comprehensive, these are some worth checking out. 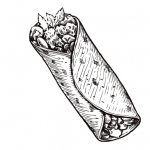 Zuppa Zuppa Soup Kitchen has been at the Yacht Club the longest. Founded by Ann Harris, who worked in Italian kitchens during her time overseas in the late 1990s, this food truck has become a hit with soups like the Isabel’s Misty Cubano that features a tomato and lime broth with black beans, red and yellow bell pepper, purple onion, hominy, reduced peach & mango. She tops it off with sour cream, avocado, cilantro and crushed red pepper. This dish, along with Pearlie’s Dumplins, were named after her children.

One popular dish has been “Mama’s Mood Swing,” where Harris makes what she’s feeling. Its success allowed her to understand the level of trust she has earned with her customers and inspired further culinary experimentation.

As for recipes, Harris said, “The ones I actually have written down number maybe four. And the repeaters, I have memorized which ingredients seemed to hit a note. As for the free form ones, it’s taste based on flavor harmony and texture.” 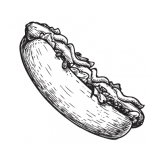 The Green Goat has also been staple at the Yacht Club since 2015. Proprietor Erin Walsh lived in Florida for 10 years and worked in a Cuban fine-dining restaurant, which allowed her to learn the finer aspects of it. She grew up in St. Louis and spent time in the Missouri Ozarks, where she enjoyed a whole different type of food.

When she decided to open a food truck, fusion seemed like the best way to go. Her recipes took staples like the Cuban sandwich and merged them with her own nontraditional sauces like mango jalepeno. Her cilantro sauce has more of an Arkansas feel to it too. The classic Cuban and the Off-the-Rails Cuban, which features a marmalade, sweet country ham and goat cheese, are two of her most popular items. Her tostones and yuka hark back to the traditional style. Eventually, she’s added items like tacos that have sweet potatoes and corn. Her menu is also vegan friendly with some items. 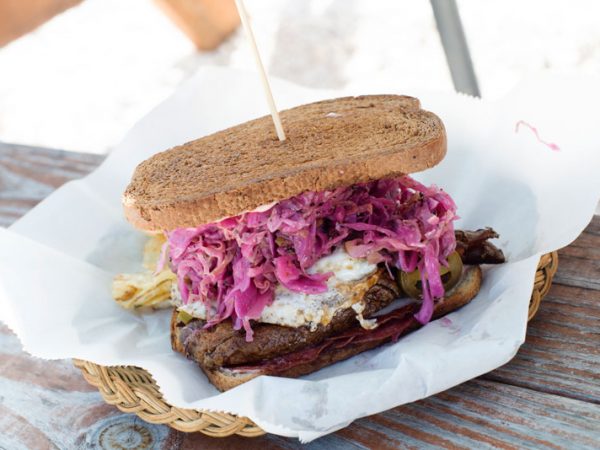 While her run at Yacht Club has been a success, Erin is planning a move to south Fayetteville and a new location that she calls The Goat Pen. It has spaces for four food trucks. Along with The Green Goat, her other food truck, the Chuck Wagon, will be located there. This second truck will also focus on fusion as she plans to incorporate African condiments like kasundi and other interesting flavors into Southern staples like chicken biscuits. There will be a brick and mortar location that will sell local art and beer.

On Saturdays, the spot is popular among artists and makers, who sell succulents, fairy houses and more. If someone walks or bikes to the location, she will take a dollar off their bill. She is excited about their new location.

“I want it to be a community place,” she said. “There’s no place for people to meet or sit down with their kids in this part of town like this. It’s a really pleasant place to be. I hope to be the heartbeat of the south Fayetteville residential area.”

Located at 372 W. Dickson Street, Shulertown is in the heart of the action. From college kids to retirees, this is the place to come for a treat served hot and fresh by food trucks like elder statesman Frickin’ Chicken, Blazin’ Asian Munchies (BAM) and Wicked Wood Fired Pizza. Once you’ve had the main course, then it’s time for dessert. And Shulertown has just the place. 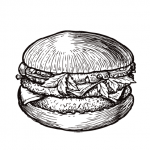 Ryan Burton grew tired of life on the road as a musician so he decided to follow his passion — ice cream. He toyed with the confection as a 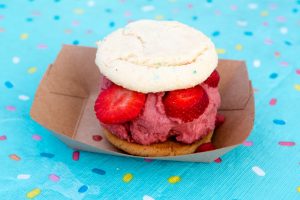 hobby for a few years, but decided to dive in and attend the Ice Cream Short Course at Penn State University and learned all about the science behind making ice cream. Armed with this newfound knowledge, he headed back to Fayetteville, where he attended college, and opened Burton’s Comfort Creamery in the summer of 2014. It is open seven months out of the year.

Their most popular cones are the Michael Jackson, Ben’s Beloved, Mint Condition, and Salty Dog, all of which are soft-serve cones drizzled with different sauces and rolled in fun, familiar toppings. When it comes to creating new flavors, Burton relies on trial and error to get things right.

“A lot of times we think we have a great idea, but it doesn’t execute greatly,” he said. “Finding good toppings that can stick to our ice cream, working on sauce consistency, and finding the perfect recipe for cookies to be frozen but not be as hard as hockey pucks are just a few things that we have had to tweak time and time again over the last few years.”

Burton is in the process of establishing a brick and mortar location but has not announced where yet. He feels the location helped create a brand and many fans around town. He adds that the camaraderie amongst the other trucks has been positive as well. Having a truck to experiment and grow has been instrumental to Burton’s success.

“Running a business out of a food truck can be very challenging due to space, power, and equipment restraints,” he said. “But costs are much lower when running out of a truck and can make a new idea much more affordable to test out before committing to a full-size brick and mortar.” 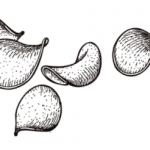 Lunch reaches for the sky at Natural State Sandwiches. The “all-in-one” sandwich truck stacks meats, cheeses, salad, French fries, even onion rings high between two slices of bread. Amber Cafourek-Belasco started the food truck with her husband, Tino, three years ago. Opening one had been their dream when they lived in San Francisco but red tape had prevented them from it. Luckily, Fayetteville was more receptive for such business ventures.

Natural State Sandwiches started at the Yacht Club before relocating to North Street.  Amber says Tino working in the wine industry has allowed them to dine at some of the finest establishments, while all the while, she was taking notes to find her favorite food combinations. The inspiration for Natural State was the Pittsburgh, the original all-in-one sandwich. It is the only staple on their menu. Everything else rotates depending upon what is in season.

“We have a ton of rotating sandwiches,” Amber said. “Our recipes are endless and we’re coming up with new ones all the time.”

The customer favorites are the mango habanero chicken, chicken berry brie, apple pie grilled cheese, and reuben, the latter is all done in house and takes two months to prepare all of the ingredients like the house-made sauerkraut. The sandwich has beer-braised corned beef with hand cut fries and house-made Russian dressing and Swiss cheese on pumpernickel and rye. She says whenever the reuben is on the menu, it tends to sell out before they open for business for the day due to call-ins. They sometimes offer a combination of The Reuben and Pittsburgh called The Reuburgh.

Natural State Sandwiches has a loyal fanbase. Amber believes it’s because they do things a little differently. “Everything we do is a little bit unique as far as food trucking is concerned,” she said. “What makes us different is the freshest ingredients we can possibly find with an ever-rotating selection.” 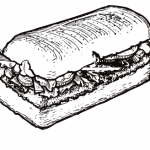 On opening night, Paula Jo Chitty-Henry looked up and saw 35 tickets waiting. She was halfway through a rush of 70 customers and wasn’t sure if she could pull it off.  But like many anecdotes in the tale of Crepes Paulette, she endured and learned from it. That was 2010.  Seven years later, the original Bentonville food truck still stands and even has a sister restaurant a few miles away.

Leading up to that first evening, Paula and her husband, Fred, put in a lot of work, looking to establish themselves in the culinary scene after returning from his native France a few years earlier. They knew that Crystal Bridges would be a game changer for the area and wanted to open a restaurant in time. However, the banks weren’t ready to sign off on that idea yet. So they decided to scale back their idea.

“Seventy percent of restaurants fail,” she said. “Risking less is a good way to do it. There weren’t really food trucks [here] yet but they were everywhere else in the country so we figured that was a good way to try the concept and figure it out.”

They found their truck, dubbed “Madame Poupon,” and set it up so customers could view the crepes as they were being cooked. When they opened, they served three flavors — chocolate ganache, strawberry jam and sugar butter. As things began to catch on, they added savory buckwheat crepes, a staple of the area of France where Fred grew up. They found themselves often restricted by the size of the trailer and the availability of certain items.

Soon they found their permanent location in downtown Bentonville across from 21c Museum Hotel, the people flocked to Crepes Paulette. About four and a half years after launching, they began to explore the idea of opening a brick and mortar location again. While they initially thought they had the right spot, it fell through. As always, they didn’t give up. In 2016, Crepes Paulette opened at 100 SW 8th Street. They still maintain the casual, whimsical atmosphere of the food truck and you can watch them cook. Only now they serve beer, wine and espresso drinks.  Their menu is slowly expanding with soups and crepe cake along with plans for salads in the future.

As for Madame Poupon, she’s still downtown with no plans to leave anytime soon. “She does not like to move,” Paula said. “She’s extremely happy there.”