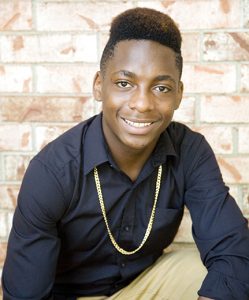 Scroll down the screen, click on play; Chris has something to tell you. The handsome, well-spoken teen looks like any other high schooler with a palpable charisma and a jokester’s grin. You hear he likes most sports and he’s good too. That he likes photography and likes to write. You hear him describe himself as someone who picks others up when they’re down, often clowning to make them laugh. And you hear that he’s in the system because of his mother’s drug addiction and her refusal to get the help that would’ve preserved her family. As intrusive as it feels, you catch yourself wanting to know more, how it feels, what it takes to face the future knowing your past was the reckoning for the sins of another.

“One of my main goals is to be competitive in life and to keep moving forward,” he tells you. “I want to be adopted to … show someone I’m not just a piece of trash you throw away.”

Martin has 11 years with the Division of Children and Family Services, the arm of the Arkansas Department of Human Services responsible for kids like Chris. For going on three years, she’s sat here in the director’s chair shining light into the darkest of situations, a diminutive den mother to thousands.

“As of today, there are 4,298 children who are in the Arkansas foster care system,” she says. “Of those, we have about 341 children who are still waiting on a family, which means [parental] rights have been terminated and they’re in a placement that does not plan to adopt them. So, 341 children who need a forever family right now.”

A lawyer by training and an advocate by nature, such facts tug and pull their way out of Martin. She recites them easily, emphatically, leaving no doubt in the listener of what she just said. So, 341 children who need a forever family right now.

The total, shocking as it may be, is a far cry from what it used to be. And, thanks to new processing efficiencies DCFS has introduced, cases are cleared faster than ever to try and resolve matters as quickly as prudent. But despite these wins, it never leaves Martin that there are still foster kids equal to the population of Lonoke sleeping in strange beds tonight.

“A lot of our kids do go home,” Martin continues. “We try and work with parents; we try and offer them services so they can safely parent their children. We have about 50 percent of our kids who are going home and about 90 percent of our kids are either going to a relative or some family member in addition to that reunification. We do really value placing kids with their family, if at all possible.”

“But there are some of those kids who don’t have safe, appropriate relatives or their parents can’t get to the point where they can safely parent them and then we have to terminate parental rights and look for a forever family for those kids.”

Martin leans forward as she says this as if to will the listener to comprehend:  Kids aren’t snatched from their parents without good reason and they don’t get put up for adoption cavalierly. Crudely put, the 341 kids waiting for a family are there because there’s literally no other option better than the agonizing wait for a stranger to notice. And the clock is ticking.

“National research shows children 12 years and older who continue to live in foster care after three years are almost certain to age out of foster care before finding a permanent home,” Martin says evenly. “It’s not a magical age number, but it is the longer you live in foster care, the more likely your chances are that you’re going to stay there.”

Down the hall from Martin’s office, in front of a crimson wall painted with a massive grid showing the progress of active cases, sits a ribcage of black filing cabinets. They could be in any office holding financial reports, sales collateral or HR packets. But they’re here and they’re not – every manila file folder in every one of these locked drawers is a life.

“We have to find permanent placements. When kids come into foster care, if they can’t go home, we’ve got to find them homes quicker,” Martin says, intensity curling her voice. “Frankly, the longer you’re growing up with the state as the parent, the more trauma you’re suffering. Kids need to be with a family. The state was not meant to raise children. We need to be finding families sooner and increase their chances of being adopted.”

Scroll down the screen, click on play; and you lock eyes with Andres. The seventh-grader with the soft voice and a love for animals wants to be a vet when she grows up. She enjoys her science classes but not, she will tell you directly, her math classes. There’s a childlike quality to her face, but when she speaks her tone leaves no doubt she’s been through things in this world most of her peers outside the system will never have to. She’s honest about herself too, telling you haltingly that she doesn’t really like the word “no”.

Andres’ eyes cast around, as if wondering what the world on the other side of the camera thinks of what they see. Then she looks down.

Don’t let the doe eyes, a past life as a collegiate cheerleader or the cane sugar drawl fool you –- there’s as much billy goat as belle in Jourdan Williams, especially when the subject is kids waiting for a forever family.

She would have scooped up a couple herself by now had the good Lord not seen fit to chuckle at the doctors and send her and her husband two – soon to be three – babies of her own. And even though He did, she still stepped up twice to chair Walk for the Waiting, an event that raises cash and awareness of adoption issues in Arkansas.

“Everybody can do something,” she says. “You have a little part that you can play. If it’s $5 that you want to donate and give up your $5 coffee that day, it’s going to actually matter. It’s going to add up to help train a family so they can help bring a kiddo in and get them out of the system.”

“If you can’t give your $5, you can do what I’m doing and help spread awareness. You can share this on your social media post, because I know you have a heart. What’s driving your heart? For me it’s these kids in Arkansas that need us.”

Williams isn’t ignorant to the complex web of human frailties that land kids in the system; all of that got wrung into her while working with behavioral health institutions and day treatment facilities. There, she saw the devils so many Arkansans dance with and what that card costs, including losing their kids. It drives her all the harder to get every child a permanent home and a fighting chance in life.

“I want these kiddos to find a home. That’s our ultimate goal,” she says. “As a walk, we have the goal of raising $300,000 which is split among three organizations to keep them equipped to be able to find these families, educate families. I want for people to be at the walk that were just like me a few years ago, who had no idea what the need is.”

“And maybe there’s a food truck there that they want to come and try out or they have a free ice cream from Hiland Dairy and they walk by the Heart Gallery. And they see a face and it punches them in the gut. And they’ll say ‘That face could be in our home.’ And they go home and start praying about it and start processing it and looking at how can they make this work. For them to be just open and try, that’s what I want.”

The only time Williams’ fervor dies down is when she talks about the waiting kids she’s met. Two teenage girls in particular choke her up in no time, especially the one who reminds her the most of her teen self and who will soon age out of the system to an uncertain future. It is for her, and all the ones like her, that Williams preaches with tent-revival zeal.

Chris’ complete video, produced by Project Zero, can be viewed at https://www.youtube.com/watch?v=87kcDerdHzA

Andre’s complete video, produced by Project Zero, can be viewed at https://www.youtube.com/watch?v=r3lt0OoU5_c

Walk for the Waiting is Saturday, May 4 at War Memorial Stadium. Individuals and teams are registering now; for full details or to make a donation, please visit https://www.walkforthewaiting.org/.