El Dorado’s Murphy Arts District (MAD) won’t just be a venue for out-of-towners to visit. The people behind MAD want the project to enrich the small Southern town and build a lasting community through music, arts and more.

AY has already written about the amazing musical acts and food that will hit El Dorado this fall when the Murphy Arts District opens, but the district’s impact will go beyond entertainment. Even when music isn’t playing in the Amphitheater or the Griffin Music Hall, MAD plans to remain a destination for those from El Dorado and people from the surrounding area.

The Griffin Restaurant will be open seven days a week, and will serve local food with a finer flair. For those who want to buy local produce and bring it home with them, the stalls near the MAD Amphitheater outside will house farmers markets. Instead of setting up in an empty parking lot, local farmers will have a place they can sell their goods week after week.

In the same area, a children’s playscape will draw kids and adults to the district.

“Every square inch of this two acres has some sort of play element on it for kids,” MAD President and COO Austin Barrow says. The area’s design will be based around Arkansas flora and fauna, and it will be surrounded by a fence so that parents can keep an easy eye on their kids.

An initial plan for the Murphy Arts District didn’t include anything for children, but Barrow says they quickly realized that needed to change. 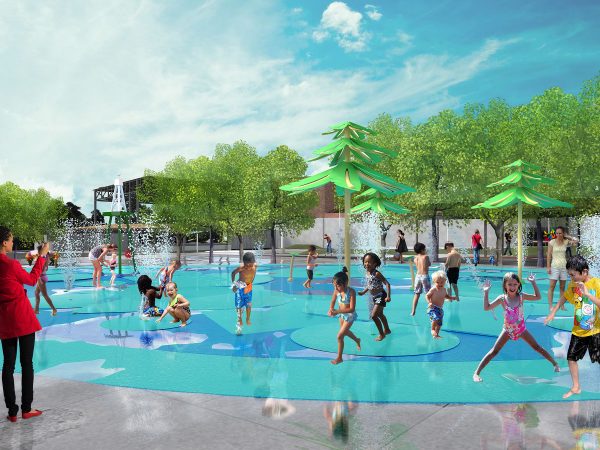 “We knew immediately that we had to make some sort of change,” Barrow says. “And so now we have a 2-acre children’s playscape that’s being developed with a half an acre of it developed into a splash pad. And it will be free and open to the public every day.”

Barrow, an El Dorado native, says MAD executives call the area a “destination playscape” because a market feasibility study – one of many the district conducted – showed parents and children would travel just to visit the play area.

Barrow says he’s seen the effectiveness of one of these play areas firsthand, and is excited to bring his own kids to the one in El Dorado.

He took his kids to one in Lake Charles, Louisiana in the middle of winter, wanting to see it but thinking the cold weather would discourage them from playing. They loved it – and so did a bunch of other children.

“Before I knew it, there were over a hundred kids and parents everywhere around this thing,” Barrow says. “I guess church had let out, people were going to lunch and things like that. And so, it’s like in the mid-20s outside. It’s overcast, it’s cold, it’s uncomfortable, your nose is running, you can’t feel your fingertips anymore and there are a hundred-plus kids running over this equipment like nobody’s business.”

“That’s how I knew it would work. If you can get a hundred kids outside to play in 25-degree weather, something’s going on,” he says.

When Barrow spoke to the parents in Lake Charles, many of them lived in the 15-mile area surrounding the city and their Sunday afternoon plans included taking their kids to the playscape.

In the same way, the people behind MAD hope to give parents and children in southern Arkansas a family-friendly destination with the construction of the playscape. Only in this case, the play area is just one element of a district that has something for everyone.