"A Good Bite:" Try Out Nyx Cafe Restaurant and Bar in Eureka Springs!

It’s hard to miss Nyx Café Restaurant & Bar, located at 85 S. Main St., in Eureka Springs.
At night, the windows are illuminated in sapphire neon lights, giving the historic building a warm glow. Located downtown, Nyx occupies the space that used to be the Wagon Wheel Tavern in a building that dates back to the late 1800s. It backs up to a cliff wall which is incorporated directly into the structure and is visible from a glass wall. If you visit on the right night, you may see raccoons emerge behind the glass from the cliff wall.
While the exterior may catch your eye, the food and story behind the business are sure to leave an impression. 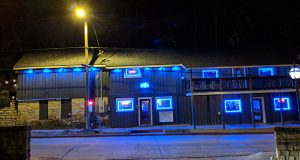 Nyx opened on Aug. 29, 2018, on the owner Stephen Rodgers’ birthday.
A native of New Castle, England, he moved to Eureka Springs 23 years ago for a woman. That didn’t work out, but he fell in love with Eureka Springs and eventually married Chris on Jan. 1, 2011.
“I bought a place here and fell in love with it. it’s a unique oasis in the middle of America. It’s kind of European so it made me feel at home,” he says.
He owns a set of cabins and loves historic buildings. However, the building had fallen into disrepair
Rodgers does not have a background in the restaurant industry so when designing a menu, he wanted a place where he could eat what he liked. And he likes burgers and steaks.
“I wanted something locals could come in, get a good bite to eat that wasn’t McDonalds and wasn’t a $24 burger. We have really good burgers, and $45 steaks if you want to do the hot rocks,” he says.
Within months of opening, the restaurant swept an annual burger competition in Eureka Springs, winning best burger, people’s choice, and best chef. 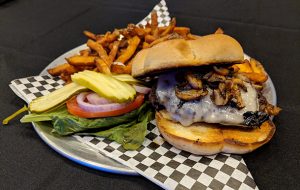 One of Nyx’s delicious burgers!

The Queen B burger took the prize and is a 6-ounce angus burger with bacon, three-cheese mornay sauce, onion tanglers, and blueberry barbecue sauce on potato bun.
They don’t just serve steaks – you can cook your own on a volcanic rock heated to 700 degrees.
“We have some really good cuts of beef. Sear it, put it on rock, comes with vegetable, starch, sauces. You cut bite size pieces off, mix it with compound butter. When it cooks it, it keeps it so hot and juicy on every single bite. It’s kind of like every single bite is the bite off the grill,” Rodgers says.
The restaurant has a full bar, multiple options for outdoor seating, and live music on weekends. The lights outside cast a sapphire glow inside.
While Rodgers has no previous restaurant experience, he transformed this one in only 15 weeks from the time he closed on the property to when he opened the doors. And it was done the same year he started raising his step-granddaughter. Rodgers’ wife’s daughter gave birth to Hazel Nyx on Jan. 10, 2018.  The mother was ill and not able to care for the child, so Stephen and Chris are raising her. 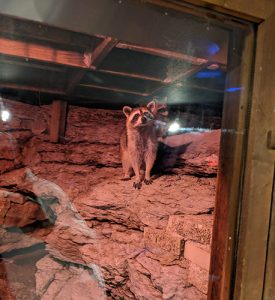 A nocturnal visitor at Nyx!

Hazel’s middle name is Nyx because her mom loves Stevie Nicks, but in Greek mythology Nyx was a Greek goddess of the night, feared by Zeus for her beauty.
“I was going to call the restaurant something else but this little baby stole my heart so I decided to name the restaurant after her. She’s a precious thing and she’s going to be a Greek goddess,” he says.
Nyx Café Restaurant & Bar, 85 S. Main St., Eureka Springs. (479) 363-6856. www.nyxcafe.com
READ MORE: A Taste of France in Arkansas: Paulette’s Crepes