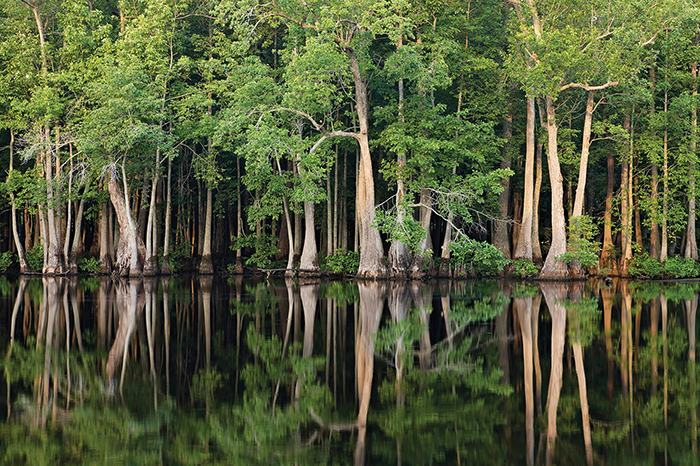 For nearly half a century now, Arkansas has been known as the Natural State. It’s a phrase most of us appreciate, proud of our outdoor treasures like the Buffalo National River, Mount Magazine, the Big Woods and Lake Ouachita. A handful of key organizations to include Arkansas State Parks, the National Park Service, the U.S. Forest Service, the Arkansas Game and Fish Commission, the Ozark Society, the Arkansas Natural Heritage Commission and many others have acted to protect such places for all of us to enjoy.

Yet there’s another important conservation group in the mix that’s spent most of its four decades in the state operating under the public’s radar. And that’s the Arkansas Nature Conservancy, an outfit of 6,000 members that’s worked in some 50 of Arkansas’ 75 counties. Bringing together an exceptional coalition of private landowners, small businesses, national and international corporations, public agencies and other organizations and individual donors, it’s conserved more than 340,000 acres of land in the Natural State. 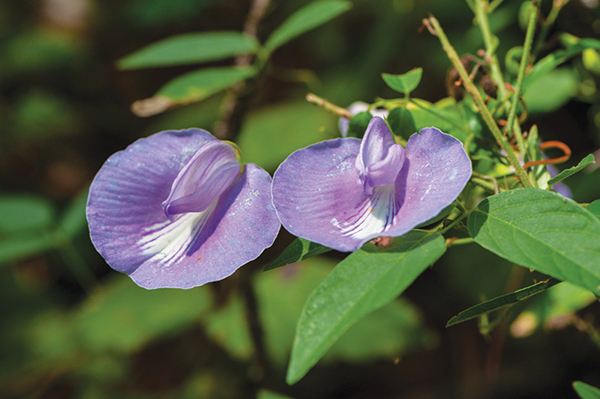 The Nature Conservancy’s presence in the state can be traced back to the late 1970s when a 12,056-acre tract on the south side of Beaver Lake was put up for sale. A California firm had secured an option on the property, planning to convert it into a massive vacation home development. Learning of the proposed transaction, a vocal group of local citizens lobbied for its purchase by either the Arkansas Game and Fish Commission (AGFC) or Arkansas State Parks. Both had hoped to obtain the huge parcel, but neither had funds to complete the deal. Under the leadership of then Gov. David Pryor (and later Gov. Bill Clinton) and with the help of nearly two dozen banks in northwestern Arkansas and the national office of the Nature Conservancy, the land (nearly 19 square miles) was bought by the State of Arkansas and is today managed by State Parks, AGFC and the Natural Heritage Commission. Its original purchase price of $3.175 million pales in comparison to its present-day value of some $30 million. Now known as the Hobbs State Park-Conservation Area, it’s one of the real gems of Northwest Arkansas, offering primitive campsites, more than 50 miles of prime hiking and biking trails, and a wealth of interpretive programs in one of America’s fastest-growing regions. 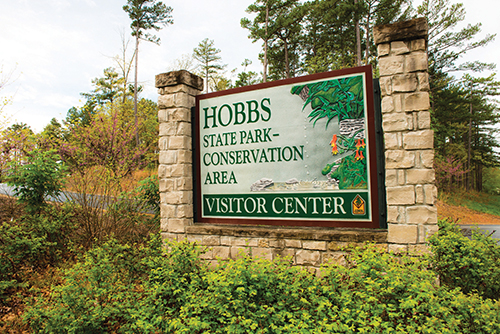 A couple of years later — on April 12, 1982, to be precise — the Arkansas field office of the Nature Conservancy was officially established with Kay Kelley Arnold as its director. Backed by a $1 million challenge grant from the Winthrop Rockefeller Foundation, Arnold got to work building a dedicated staff and a strong board of directors. “We needed time to have some successes to attract and cultivate donors and partners,” she remembers. “The magnificent characters I got to meet and work with on projects across the state ensured that the work was always fun and interesting.” Bringing in top-notch board members remained a priority for first Nancy DeLamar and then Scott Simon, Arnold’s successors as the organization’s director.

And the accomplishments of the Arkansas Nature Conservancy have been nothing short of amazing. Let’s begin with one, way down in southwest Arkansas: the Cossatot River. This clear mountain stream heads up in the Ouachita National Forest south of Mena, creating some of the best whitewater in mid-America as it tears through several east-west trending ridges on its southbound journey. The 11-mile stretch of river between the national forest boundary and Gillam Lake had been on the wish list of conservationists (and paddlers) for years. Originally owned by Dierks Forests, much of the land surrounding the Cossatot was sold to Weyerhaeuser in 1969, to include a 4,144-acre riverside corridor that Weyerhaeuser put on the market in 1984. The Nature Conservancy stepped up to the plate and purchased the proposed park/natural area, holding it in trust until the State of Arkansas appropriated funds to buy the property in 1988. Today, the Cossatot River State Park-Natural Area is arguably the best spot in Arkansas to experience the remote and untouched Ouachitas. 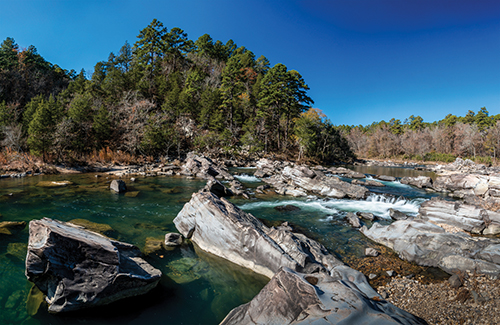 But the work of the Arkansas Nature Conservancy extends well beyond the state’s hill country. During DeLamar’s tenure as director, the group was instrumental in a 41,000-acre land exchange that vastly expanded public holdings between the Cache River and White River national wildlife refuges. These efforts to protect the remaining bottomland hardwood forests in eastern Arkansas — an area known as The Big Woods — are vital to the future of Arkansas’ rich Delta region. 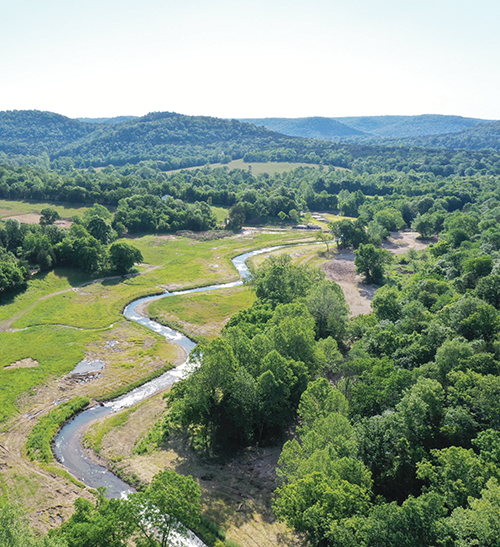 Likewise, in 2019 the Nature Conservancy played a key role in finding a solution to a contentious hog farm situation in the Buffalo River watershed. When Gov. Asa Hutchison asked Stacy Hurst, his director at the Arkansas Department of Parks, Heritage and Tourism, to tackle this issue, she quickly contacted the Arkansas Nature Conservancy. “I called Scott Simon to better understand the full landscape surrounding the issue because there were many groups and individuals working on all sides,” she says. Simon and his team had developed a relationship with the farmers and were able to negotiate a settlement agreeable to all. “The Nature Conservancy was a great resource and partner, and helped the state work through a longtime controversial issue.” 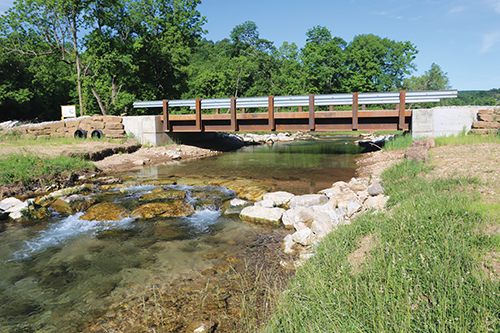 Protecting the Buffalo River’s water quality remains a priority for the Nature Conservancy. It’s presently working with the Searcy County Farm Bureau, the Arkansas Cattleman’s Association, and several other groups in a Regional Conservation Partnership Program. Funded by a $2.7 million grant from the U.S. Department of Agriculture, this “win-win” project will benefit local landowners and the Buffalo River. 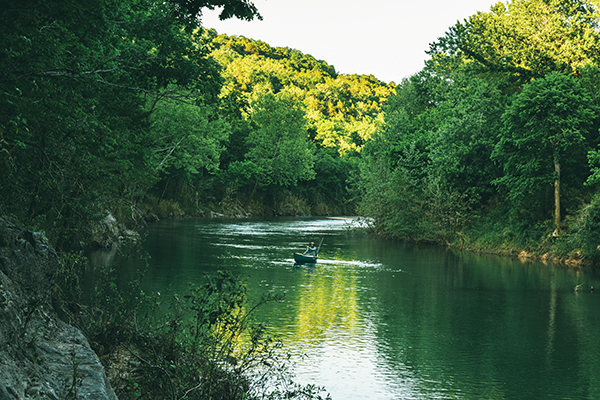 A little to the northwest of the Buffalo is another stream that’s caught the attention of the Nature Conservancy: the Kings River. Encompassing some 10.5 miles of this Carroll County stream, the Kings River Preserve safeguards the quality of one of the region’s primary sources of drinking water. It’s also a favorite destination for birders, paddlers, rock-skippers and photographers, and anglers will tell you the Kings River is nationally known for its smallmouth bass.

Along with a handful of state agencies, the Nature Conservancy is assisting with the Arkansas Unpaved Roads Program, an incentive-based partnership designed to help counties improve graveled roads in rural regions via a range of best management practices. Local drivers get better roads while sediment flowing into nearby lakes and streams is significantly reduced.

While clean water is among the organization’s top interests, it’s also a big believer in fire. Yep, that’s right, fire — as in the form of prescribed burns. The Arkansas Nature Conservancy is a major player in the Fire Learning Network, a group whose members are committed to restoring portions of the Ozarks and Ouachitas to healthier forests. They’ve found that regularly burning areas via controlled fires  increases forage for deer and elk and works wonders for ground-nesting birds such as quail and turkey.

Following the blizzard of 2021, many of us are suffering from bad cases of cabin fever. To offset this malady, let me suggest taking a daytrip to one of the many Nature Conservancy sites in Arkansas. We’ll start with the Smith Creek Preserve, a 1,316-acre delight in Newton County. Located on one of the Buffalo River’s beautiful spring-fed tributaries, the preserve is a photographer’s paradise, featuring a boulder-filled creek, waterfalls, swimming holes, lush vegetation and bluffs — all accessible via a series of well-marked (and occasionally steep) hiking trails. And it’s easy to get to with a pair of handy parking areas adjacent to Arkansas Highway 21 just a couple of miles north of Mossville. 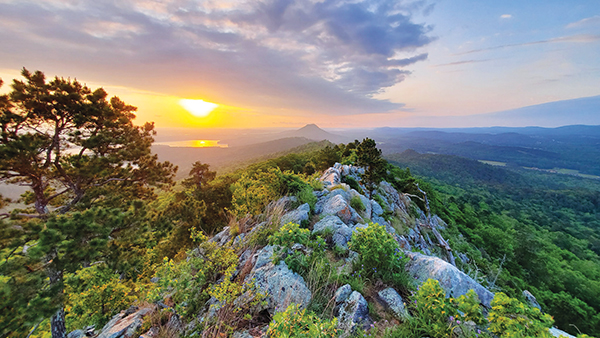 A second option is the Rattlesnake Ridge Natural Area, a 373-acre tract located off Barrett Road a short distance west of Pinnacle Mountain State Park in the central part of the state. A new addition to the Arkansas Natural Heritage Commission’s properties, this interesting piece of rugged topography includes 6 miles of trails zigzagging over and through creek bottoms, forested ridges and rocky outcrops. You’ll be rewarded with great views, so bring along a camera.

Yet another intriguing alternative is the Bluffton Preserve, a little piece of heaven situated a few miles north of Clinton and west of U.S. Highway 65. Totaling nearly 1,000 acres, this special piece of real estate was bought by the Nature Conservancy with assistance from Southwestern Energy, BHP Billiton and other generous donors. With almost four miles of the picturesque Archey Fork of the Little Red River winding through the property, it’s a classic Ozark setting, complete with a perfect swimming hole.

Simon has been working with the Arkansas office of The Nature Conservancy for 25 years now, serving as director since 2003. He and his team are big believers in partnerships. “Though Arkansas has such abundant natural resources, the conservation community is small, and funding is precious, so it requires everyone to work together to conserve those resources to benefit the public,” he says. “Our spirit of collaboration as a state is unique and one of Arkansas’ strengths, and we are fortunate to have so many good partners working together.” 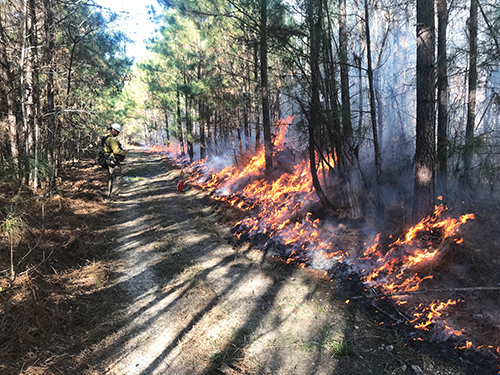 Simon is feeling pretty good about the state’s future. “By creating more opportunities for people to enjoy the places we work to conserve, we are also creating opportunities for people to experience nature and engage with conservation in a different way,” he says. “Maintaining support for conservation is critical to keeping the Natural State natural.”

Gov. Hutchinson is quite familiar with the organization’s work. “When I think of the Nature Conservancy, two projects come to mind,” he says. “The leadership has been unfailingly willing to jump in and help keep the Buffalo River pristine. Their legwork played a huge role in bringing Rattlesnake Ridge into the state’s inventory, and their suggestions about controlling its use will help protect it for the future.”

According to Hutchinson, the Nature Conservancy fills a crucial role in the state. “Arkansas has benefited from the Conservancy’s financial support and, just as importantly, on the creative and innovative solutions the leaders apply to the acquisition of land and the appropriate approach to conserve it.

“The Nature Conservancy in Arkansas has been a faithful and generous partner, always on the alert for problems and quick to assist when the state needs help.”

Endorsements don’t get much better than that.

For more information on the many wonderful Arkansas Nature Conservancy sites, visit its website at www.nature.org/en-us/about-us/where-we-work/united-states/Arkansas. And if you’re looking for a fine organization to support, this one is certainly worthy.

READ MORE: The Cry of the Monarch Butterfly: Rejuvenating Pollinators in Arkansas