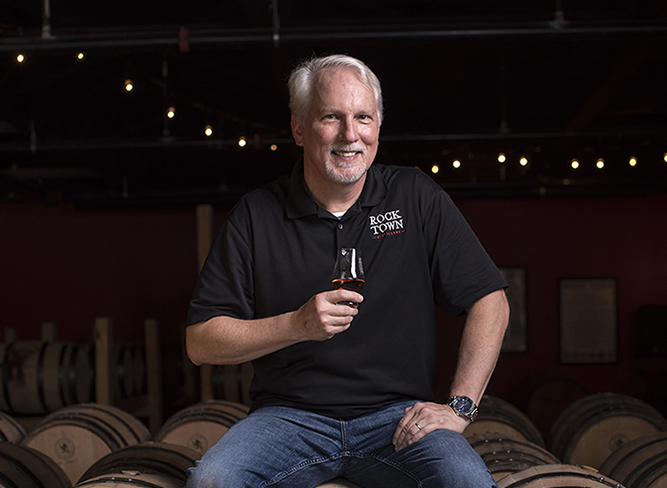 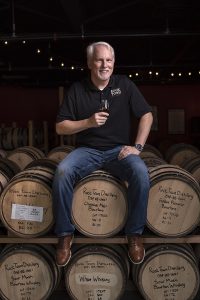 When I was 18, my grandfather made the rounds at a New Year’s Day gathering with a recycled bottle in one hand and a shot glass in the other. He offered every adult male there a drink to the new year and coming to me, he stopped, sized me up and at last poured a dram. I slid the home-made liquor down the hatch, and he smiled, nodded and moved on. I was the only grandson there so honored.

The memory is one of my most cherished.
The hooch, on the other hand, was the stuff of nightmares.
Grandpa may have shown me the ultimate respect with what he charitably called bourbon, but he set back my appreciation for America’s native whiskey by decades. Needless to say, I didn’t have high expectations as I began my research for this article.
My, how times have changed. Today there are many brands of the whiskey to choose from, including a selection distilled right here in Little Rock. And demand is growing; not unlike its craft beer industry, America’s whiskey makers are at top form, led by arguably the most romantic of the breed, bourbon.
The Craftsman
Phil Brandon looks to the future
Eight years ago, Phil Brandon fired the first shot in Arkansas’ whiskey revolution with Rock Town, the first legal distillery in the Natural State since Reconstruction. The smoke hasn’t cleared since.
“It’s Americana, man. It’s baseball, apple pie, bourbon and Ford,” Brandon says, reclining in his office deep within Rock Town’s new 26,000-square-foot SoMa space. “Bourbon is corn; it’s oak; it’s everything red, white and blue and delicious.” 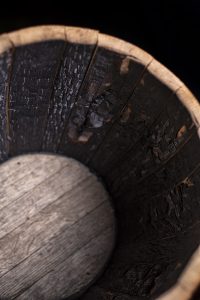 The distiller’s oak barrels are made in Arkansas, too.

Rock Town went from the craziest of ideas to a major success, winning multiple gold medals in prestigious whiskey competitions and growing to sales in 16 states, Canada, Taiwan and the United Kingdom. About 850 people a month tour the distillery from around the world.
“Alcohol tourism, as a whole, is growing by leaps and bounds every year,” Brandon says. “Tourism has been a big part of our business and continues to be. We get people from all over. People seek us out. I’ve had people say they’ve come to Arkansas just because we’re here, from the U.K., Japan, you name it.”
Brandon has been the industry’s standard bearer in Arkansas, from modernizing the permitting process and liquor laws (the first time he asked for a distillery permit application he was told the state didn’t have one) to advancing local suppliers’ fortunes along with his own.
“What we’ve done from day one is, we’ve been educators,” he says. “We’ve taught people what bourbon is versus whiskey. We’ve taught people what rye is. We’ve taught hundreds and hundreds of people through all our tours.
“We’re very proud of the fact that we source all of our raw ingredients from Arkansas,” he adds. “So, it’s definitely Arkansas whiskey. Our corn, our wheat, our barrels are all from Arkansas.”
Asked why after nearly a decade of proof of concept, he’s still the only distiller of his size in Arkansas, Brandon shrugs and smiles. Competition will inevitably come, so he’s keeping his troops sharp.
“We’re always looking to what’s going on in the market and with consumers but staying true to our Arkansas roots, making Arkansas whiskey,” he says. “If we weren’t thinking about the consumer, we wouldn’t be doing our job. I don’t make the whiskey just for me.
“We do have a joke that I say anyway: Whiskey makers call the evaporation that occurs during aging the angels’ share. So, we have the angels’ share, we have Phil’s share and then we sell the rest.”
The Expert
How to drink like you mean it
In more than 30 years as a sommelier, there are precious few things Jeffrey Yant hasn’t seen or heard. So, when he says there’s a bourbon boom going on, best believe it.
“Bourbon has caught on tremendously in the last couple of years,” he says. “We’ve seen a huge rise in ladies drinking bourbon, where for years, it was predominantly a male drink. People are drinking it neat or on the rocks, where before it was always mixed. I think people have found out that it’s a diverse product. There are bourbons for everybody’s palate.”
As sommelier for Cache restaurant, known for its meticulous bar inventory, Yant sees plenty of first-timers. He says trying bourbon in a bar setting is preferable to investing in an entire bottle when one is getting to know their tastes, even more so with a knowledgeable barkeep.
“We are the testing ground. It’s much easier to come in here and pay $8 or $9 for a drink than to go spend $30 or $40 on something you don’t like,” he says.
Yant’s primary advice for the newcomer is to ask a lot of questions of the bar manager or bartender who can steer you to something approachable or break it in even more slowly via a mixed drink. In whatever form, Yant says the allure of the beverage is in the way it inspires connections.
“Bourbon is a neat drink. You see gentleman sipping the bourbon or the lady sipping the bourbon; very rarely do you see somebody saying, ‘Oh let’s go out and get smashed on it,’” he says. “It’s an elegant drink. To me, bourbon is one of those beverages that leads to conversation. It’s a really cool thing.” 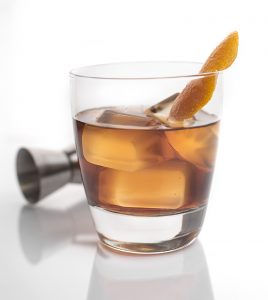 The Merchant
Stores struggle to keep top
whiskey in stock
In the very darkest back-office corner of Legacy Wine & Spirits, an upscale retailer in west Little Rock, there resides a locked cabinet crowded with bottles of all sizes and shapes, most of them bourbon.
This is The Stash, the bottles that are in such incredibly high nationwide demand a small-market store like Legacy might get one or two with no hint as to when more will arrive.
“We had a Christmas in July where everyone bought a ticket in a lottery,” says David Bevans, owner. “If your ticket was drawn, you got the chance to buy the bottle.”
Welcome to the downside of high demand; a scenario that brings out collectors willing to drop big bucks on liquid rarities. Particularly hard-to-find selections easily fetch hundreds where a couple of years ago, cases of these very same brands were for the asking from distributors.
“National brands have been holding steady and even falling short on supply,” says Jake Dell, certified cicerone. “Stuff like Eagle Rare and Basil Hayden’s used to sit on the shelf, and now they’re a lot harder to get. Not to mention your Pappy Van Winkles and stuff like that.”
Even a long-timer like Bevans shakes his head at what’s happening in the bourbon market these days much less trying to figure out where it’s going.
“There’s a resurgence within bourbons and whiskeys right now, particularly rye,” he says. “Some stuff is hard to keep on the shelf. There is a sexiness to it. People are turned on to it, that’s for sure.” 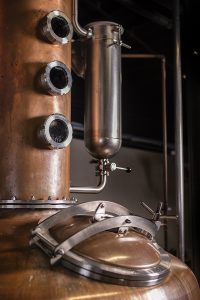 Whiskey, whisky and bourbon
What’s the difference?
As the saying goes, all bourbon is whiskey but not all whiskey is bourbon. As a category, bourbon belongs to the whiskey family, but not unlike Champagne or Parmigiano-Reggiano cheese, bourbon must meet certain requirements — laws, actually — in order to be marketed as such.
For a spirit to meet the definition of bourbon, it must be produced in America and made from at least 51 percent corn. Bourbon must be aged in new charred-oak barrels, where it mellows and absorbs both flavor and color. The whiskey must be distilled, entered into the barrel and bottled within allowable proofs, or alcohol content. Finally, bourbon must be free of any flavoring, coloring or other additives.
If all this seems finicky, understand that in its history, some distillers and re-packagers known as “rectifiers” cut their product with any number of substances, while advertising it as straight bourbon whiskey. It took no less than the federal government to bring these practices into line, first through the Bottled-in-Bond Act of 1897 and then the Pure Food and Drug Act of 1906.
Nothing in those acts, however, had anything to do with the variant spellings “whiskey” and “whisky,” etymological variances owed strictly to location and language. Irish distillers drew from the Gaelic “uisge beatha” (water of life) which sounds closer to “whiskey” than its spelling suggests. The Irish held on to the extra “e” while everyone else in the world spelled it “whisky,” notably in Scotland where Scotch had been produced since at least 1494.
America was initially schizophrenic in its spelling, though generally fell in line without the “e.” That is, until the government’s Whiskey Excise Tax of 1791 (and the subsequent Whiskey Rebellion of 1794) which cast the die for the extra “e,” a practice solidified with the waves of Irish immigrants who dwarfed the number of Scots. Today, the U.S. and Ireland are the only two whiskey/whisky-producing nations on earth to use the extra “e.”
Bourbon Myths
Three things to win a bar bet or put whiskey hipsters in their place:
George Washington made bourbon. The father of our country was, in fact, a distiller and a highly successful one at that. At its peak, his Mount Vernon distillery produced 11,000 gallons of whiskey and a profit of $7,500 in 1799. But it wasn’t bourbon. Washington’s brew was an unaged, straight rye whiskey made from 60 percent rye, 35 percent corn and 5 percent malted barley. You can still buy it onsite, but at $98 to $225 a bottle it’s a steep price for a piece of history.
Older bourbons are always better. Aged bourbons abound. Ten-year-old specimens are pretty common on up to 20+ year budget-breakers. But unlike other alcoholic beverages — notably wine — age doesn’t necessarily make a bourbon better. The longer it sits in the barrel, the more wood notes it takes on. That doesn’t suit everyone’s palate, just like more hops don’t appeal to all beer drinkers.
Gen. Elmer C. Bourbonnais of Lexington, Ky., created it. As much as those rascals in the Bluegrass State hate to admit it, there is no definitive evidence of who invented the spirit (some trace it to a late-1700s Baptist minister, Elijah Craig, of all people). And while 95 percent of all bourbon is produced in Kentucky, it doesn’t have to be made there to qualify as such.
Read >> Cocktails at the Capital: Mint Peach Julep