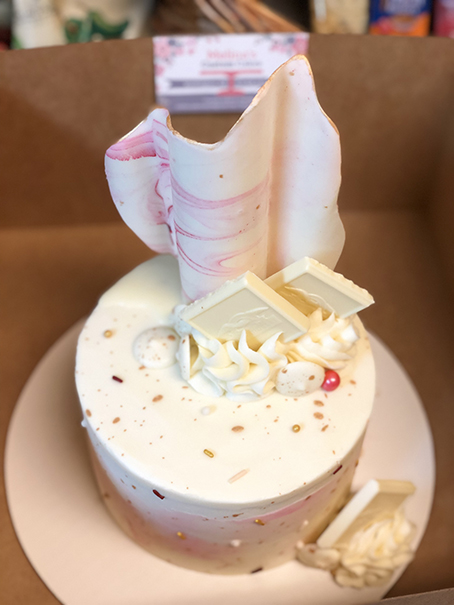 Have you ever been punch drunk from eating too much sugar? That’s exactly what AY Publisher Heather Baker and AY Editor-at-Large Lisa Fischer have been feeling after eating some delicious cakes as part of the “Heather and Lisa Eat Cake Because It’s Heather’s Birthday” contest.

“The other day, I had so much sugar that I was drunk and I went home and passed out. We’re not used to doing this, but I could get used to this,” Fischer says.

“Even after her birthday,” Fischer jokes.

But that’s not stopping them from fulfilling the task of tasting 10 cakes before Baker’s birthday later in September. The latest cake marks the duo’s fifth cake in the contest.

“We’ve passed the halfway mark on our cakes. We’ve doing 10 cakes in 20 days, and on her birthday, the 24th, we will reveal our grand prize winner,” Fischer says.

Melina Adams, from Melina’s Custom Cakes, provided the fifth cake, a white chocolate cake with marshmallow cream cheese icing. Most importantly, the cake contains Godiva chocolate, a big plus with Baker. “When she told me she had Godiva, this is the one I chose,” Baker says.

This petite circular cake is topped with white chocolate ganache, pieces of Godiva chocolate, and a chocolate wave. “It’s a smaller cake. When you get these real rich cakes, you don’t want a huge cake,” Fischer says.

“It makes it dry out,” Baker says. Plus, a bigger cake obligates you to eat it all!

The cake has a firm density, according to Fischer and Baker, but it is moist.

“It’s a really beautiful cake, beautifully appointed. She took a lot of time with the details,” Fischer says.

Both Baker and Fischer agree that Adams’ cake is a contender in the cake contest. However, they are only halfway through.

While that wraps up the fifth cake, there’s plenty more to come. All of the cakes will be judged according to presentation, taste and creativity. A winner will be announced later this month, likely around Sept. 24 – Baker’s birthday!