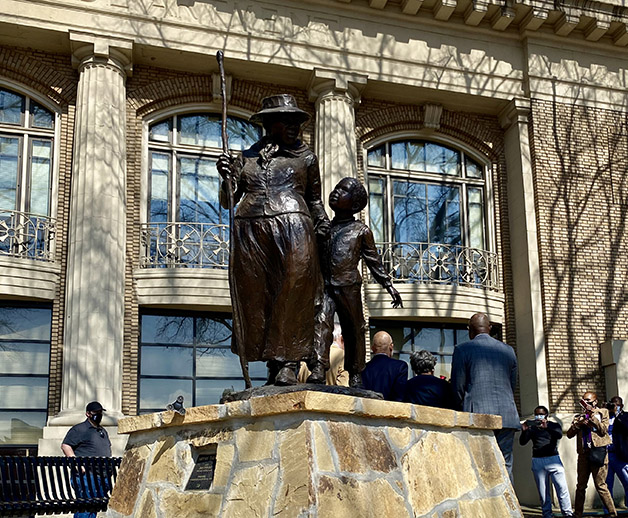 Scott opened the ceremony with detailing the importance of this commemoration taking place during this month. “On this day, the twenty-fourth day of February, we all know we are in Black History Month. We all know that Black history is American history. One of the iconic, critical, everlasting figures in Black history, American history, is the woman by the name of Harriet Tubman,” said Scott.

Tubman was born into slavery but escaped, and in turn, she led hundreds of family members and other slaves to freedom. Known as one of the most famous “conductors” of the Underground Railroad, Tubman went on to be an influential abolitionist and a spy for the Union during the Civil War. “She fought to get a pension because she was a spy in the Civil War, but she was not able to get her pension until her husband died,” said Scott. “She never stopped pursuing freedom.” 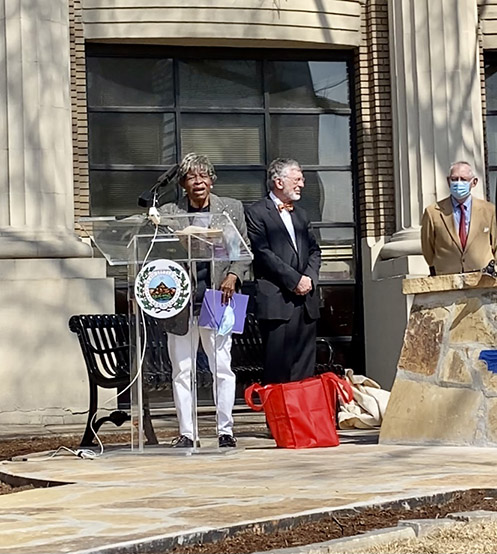 Kumpuris and Dickinson shared their personal testimonies from the long journey of bringing art to downtown Little Rock. Around 20 years ago, Kumpuris and other members of the City of Little Rock, took initiative to bring a presidential library to the city of LIttle Rock and at the same time create a more inviting place between the location of the library and the Riverfront area at the River Market. The Dickinson family was approached as an art contributor for the area. “When [Kumpuris] told Peggy [Dickinson] and me about [the River Market sculptures], we thought the idea of dressing up our downtown with beautiful, interesting and historic art was a great idea,” said Dickinson. 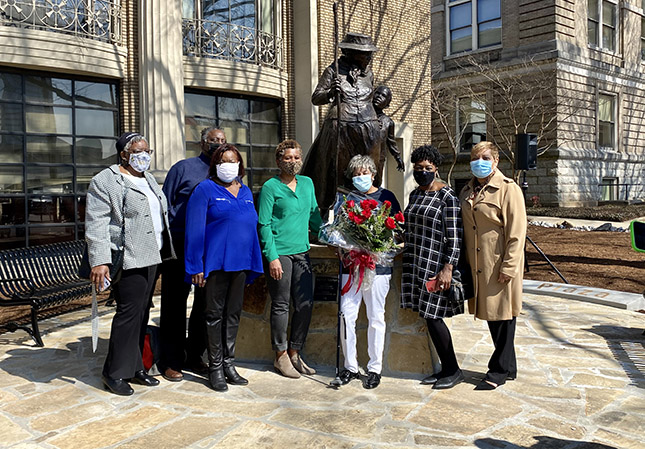 Annie Abrams with friends and family in front of sculpture.

In November of 2004, the Harriet Tubman sculpture by Jane DeDecker was first brought to Little Rock along with six other sculptures placed downtown to bring unity between the River Market and Clinton Presidential Park. The Harriet Tubman sculpture was donated by the Dickinson family in honor of Carrie Remmel Dickinson who was able to attend the dedication ceremony in 2004, but passed away a year later.

The sculpture was moved from its place at Riverfront Park to the entrance of Clinton Presidential Park. In 2020, due to I-30 construction, the sculpture along with three others had to be removed and relocated. The city and the Dickinson family made the decision to relocate Harriet Tubman at City Hall in front of the West Wing. The Little Rock Parks and Recreation Department has been constructing a plaza in the location the past few months in which Harriet Tubman will stand at the center. 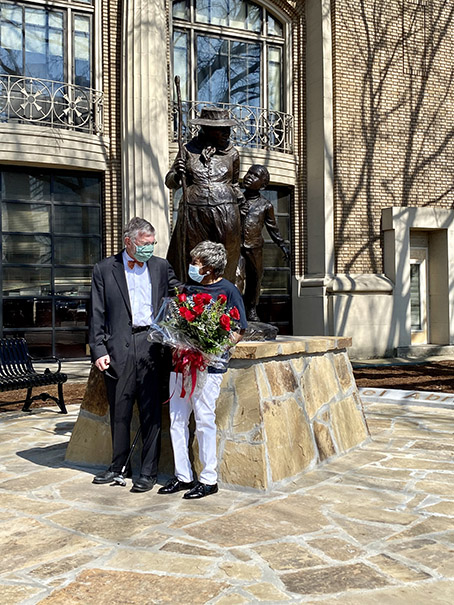 Kumpuris noted other women throughout history, especially Arkansas, that possessed a Harriet Tubman drive and leadership. “Little Rock is lucky to have had our Harriet Tubmans that have helped us through the times. If you go to Riverfront Park, there’s a great sculpture that has both African American and caucasion women who helped to pass the Nineteenth Amendment giving women the right to vote. If you look at our history, Daisy Bates is another Harriet Tubman. If you look at the Women’s Emergency Committee, there were also women who did a great job and great service for this community,” said Kumpuris. “We have been blessed with great people, especially women, who have helped us keep our moral compass where it should be. If you ask me who my moral compass is during this period of time, it’s Annie Abrams.” A retired educator, Abrams is a Little Rock citizen and a social, civic, political and community activist who has been making her voice heard for decades. Kumpuris, the City Director recalls memories of Annie sitting front row at his meetings just as she sat front row at this Feb. 24 sculpture dedication.

“Everytime I would go to a meeting and Annie would be there, I knew she was there to either praise us that we were doing something right, admonish us that we should be doing something different, or encourage us that we should be doing more. She’s done that for people all through her life,” said Kumpuris. Kumpuris praised Abrams for her contributions to the city of Little Rock and her assistance in guiding leaders toward a more positive path. “There’s a time that you need to recognize greatness in a city and realize and acknowledge contributions that have been made in a city. So not only are we rededicating this piece of sculpture in City Hall, but we’re dedicating the plaza in the name of Annie Abrams.” 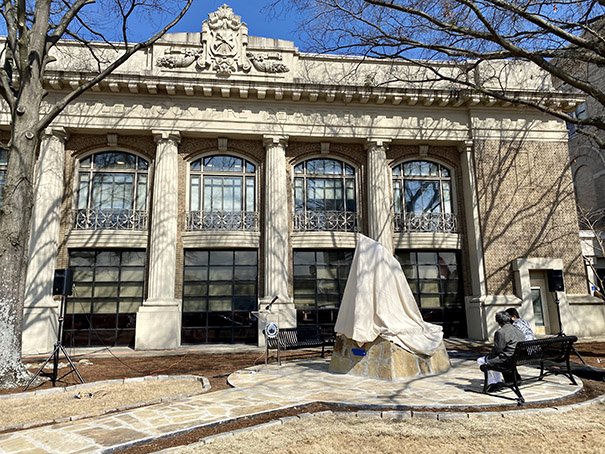 Moments before the unveiling ceremony.

Abrams attended the event thinking she would only be a guest speaker, not knowing the plaza around which everyone was gathered had her name written into it. Abrams brought with her to the ceremony books, magazines and even the United States Constitution to show attendees the power of voice and records. “I come from a heritage where records are important. If you come to my house, you’re going to get a constitution and a legislative directory,” said Abrams. An advocate for keeping politicians and officials in check, Abrams encourages citizens to reach out to representatives and senators about issues they don’t agree with – staying true to Kumpuris’s testament of her guidance and positivity. “I give these to lawyers, doctors, sanitation workers and restaurant workers so they can be as powerful as [Kumpuris],” said Abrams.

Swarmed with family and friends, Abrams, Dickinson, Kumpuris and Scott concluded the ceremony in pictures and celebration of Harriet Tubman’s new stage.