FORT SMITH, Ark. (KNWA) – KNWA recently connected with a team of paranormal investigators from Northwest Arkansas to learn how they go about finding evidence that spirits are among us.
According to a Huffington Post/YouGov Poll nearly half of all Americans believe in the existence of ghosts. Eighteen percent say they have actually seen one themselves.
“I bring that consistency and validity to those who do have hauntings and do live in fear,” NWA Ghost Connection founder Lori Davies explained. 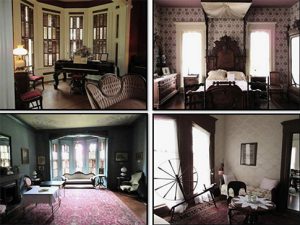 Lori Davies heads up a team of locally based paranormal investigators. Her unique path began in the 90s, when she claims she and her children experienced a haunting of their own.
“Nobody was really out there that could help us,” Lori Davies shared. “And if we talked to our preacher or a pastor, whatever clergy they kinda’ looked at you a little funny.”
So Lori Davies researched the paranormal and how to deal with it. That led her to create her team in the early 2000s. For those who have a hard time buying into the idea spirits walk among us, Lori Davies says that is just fine.
RELATED: A State of Fear: Arkansas’ Most Haunted
“I know that what I do brings relief and help to people and that’s my ultimate goal,” Lori Davies offered.
We met up with the NWA Ghost Connection team at the Clayton House Museum, in Fort Smith’s Belle Grove Historic District. The old Victorian house is said to be haunted. In fact, Clayton House Registrar Sarah Pair admitted she saw things she could not explain almost immediately after starting her job there.
“It’s been fairly steady,” Pair stated as a matter of fact. “Mostly, it’s flickers out of the corner of my eyes like whenever I’m coming in and heading to the office it kind of looks like I’ll see the shadows of someone’s legs going up the stairs.”

Pair let the team of paranormal investigators know they were in for an interesting evening.
“I warned them there was something going on tonight,” Pair said with a laugh.
Read the rest of the story at KNWA.com!
RELATED: Arkansas Backstories: White River Monster
Images courtesy of the Arkansas Department of Heritage